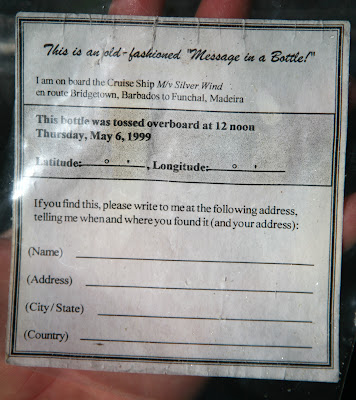 I love saying leaping lizards.. It just sounds funny doesn't it? Anyway today's post will be shorter but kinda is coupled with yesterday's one to do with currents. Currents usually stay fairly constant here in these islands as does most things do to with the weather until there is a tropical disturbance. Hurricanes change everything and all bets are off during a storm. Back in the 1995 and 1998 hurricane seasons we had several monster storms that showed us things that had never been seen in hundreds of years. In fact some archeologists say that Barbuda hadn't had a storm like Louis in over 2000 years. Lets me not get off topic as that whole hurricane topic is way too big for today. Anyway, one of the storms that managed to miss us passed right over our neighbor island to the South and did considerable damage. Guadeloupe's rivers were filled to over capacity and many trees got washed away from their banks. These trees washed into the sea, and on them there were all sorts of animals now afloat in the sea. If all things were left normal, then the trees would have kept following the current stream that I spoke about in the last blog, but this was a hurricane. Hurricanes spin clockwise in the Northern Hemisphere and as they approach the prevailing winds change direction. In fact, you can generally know where the storm is depending on which direction the winds blow from. The old people say that when a storm approaches you can put your back to the wind and put you left arm out to the side. Point a finger and that's where the storm is. Generally they move in a WNW motion when they get to these islands too. Anyway as the storm moves by the winds change and it isn't uncommon for the winds to switch 180 degrees as the storm passes. That's what happened at about the same time all the trees were expelled into the sea and the winds stayed out of the west for about 2 days sending these trees quite far into the Atlantic. After the storm finally passed the winds then died and we can deduce that the trees and all the other junk from the storm just sat out there east of the island chain waiting until the winds and currents went back to normal. When they did we started getting all sorts of debris and trees floating up on our shores. Huge trees floated up onto the windward beaches on Antigua and Barbuda. On them were some survivors that had never seen Antigua. Lizards and insects arrived wet and cold looking for a new home. Many died because our vegetation is very different here, but the large Iguana that made it to Barbuda's shoreline managed to survive. Since then I have always seen their clumsy tracks on the beaches there and have spoken too many who have seen them. Anyway, ten days ago some friends and family went over to Barbuda for a little adventure and while we were there I finally saw an iguana. The massive lizard was different than I imagined with darker skin than the ones from Montserrat. It was more beautiful too....I guess the beach life has been good for them, but I was happy to finally see my first one. Mykl saw another just a bit further up the beach so their numbers must be growing. This is such a fantastic example of how life can spread from island to island and further. I think we have seen and are seeing evolutionary history here especially because these animals have had to live in such a different habitat. They can't be eating the same stuff that was available in the lush green habitat of Guadeloupe because Barbuda is dry with very little vegetation. Anyway, something interesting to think about isn't it. Hey this pic is of a message we found in a bottle mixed up with all the flotsam and jetsam on the beach in Barbuda. I have found dozens and dozens over the years but this one had all it's ink erased by water. People rarely seal the bottles well enough. Another good trick is to put rice inside to soak up condensation. Use pencil too and you can even sink the top into some wax to be sure the top is sealed well. I have learned these tricks from the good messages I have found. Anyway enjoy your day.....its glass calm and I am on charter. Love it. The message by the way was from 1999 and was found very close to the water's edge...i have walked that same bit of beach several times over the past year. We think that it missed the caribbean and all other land masses and went around the currents more than one time which is why it took so long to get to a beach. What do you think?
Posted by 365 at 11:46 am

Living inland, I never thought about anyone finding a real "message in a bottle," much less, multiple times.

So, when you do find them, and you can read the ink, do you reply to them?

ha ha...sure i do. my sister once was sent all kinds of cute prezzies from a former QE 2 passenger who was soo happy to get a reply to their message. it's all fun.

Gee, we aren't allowed to throw stuff overboard anymore - could getted disembarked for doing it. I had to look a at the picture a couple of times before I noticed the 1999 date on that note - it would be fun to see who picked it up!