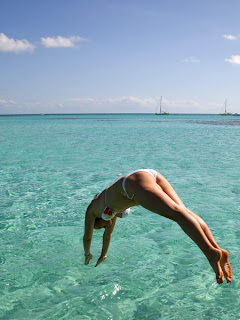 Well on Monday we all awoke knowing we had to pack up and get back to "work" in Antigua which wasn't the best feeling when you have just had the most relaxing and fun filled little holiday. Anyway, there are worse places to return to I guess so I’ll shut up about that.
The eco boat needed a little maintenance before we left and after changing the air filter and fuel filters, both of the Adventure Antigua boats set off carefully through the reef into the Atlantic on the east side of the island. We decided to go the shorter but rougher way towards Spanish Point which is the most Southerly spot on the island. The waters there are out of this world and it’s a nice place to stop off at before the trip back to Antigua. On the way up the coast we saw birds diving and couldn't resist putting over a few lines. On Xtreme it was just Mykl and I, so when we did actually hook onto a huge Mahi Mahi it was quite a challenge getting it to the boat. As the fish tore off line from the reel I stopped the boat and got Mykl set up with a belt to fight the fish. I gave her a few points on the technique too but within a short time she was too tired to bring that strong mahi the rest of the way in. I took over and finally got the big mahi into the boat about 15 minutes after she swallowed our little lure. We were using very light spinning tackle which is why it took so long, but I always prefer to use light tackle when out fishing. My dad doesn't approve and my uncle thinks giving the fish a chance isn't what it’s about. Old timers! haha
Once we had the fish I noticed all that rocking and rolling out there had turned Mykl a bit paler and I realized that we needed to get going quickly. That is always easy with Xtreme, and within another 20 minutes we were coming around the windward side of Spanish Point where my dad and uncle had been chilling with their crews. I filleted the mahi and got the meat all cut up into nice chunks ready to be seasoned and cooked. While I was bagging the fish Ali and his crew arrived in time for lunch which all the boats and their crews enjoyed with the amazing waters as our backdrop. Lovely! Having the quickest boat, Mykl and I were last to head back home and while setting the boat up we had a call from the others to say that they had just seen a lovely pod of dolphins surfing in the channel. On the way back we strained our eyes in vain to see whales or dolphins.
This photo is of the two whales we saw over the weekend. Big John had taken the photo. 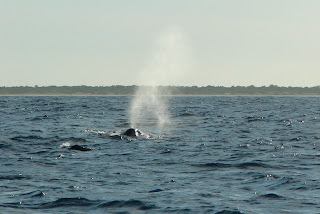 The seas were fairly calm and the trip back was easy. Big John also took this photo of me and mykl on Xtreme passing them on the way home. 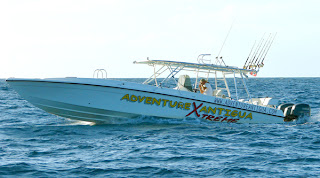 After plenty of help from all the crew washing and unloading the boats a bunch of us decided to go and have a meal at Castaways. They had gotten some of our mahi mahi too which the chef prepared in a lovely appetizer for us all to try. Yum the food was good and we all sat there after the meal satisfied in a way that you only can feel after a good island vacation.
Posted by 365 at 2:01 pm