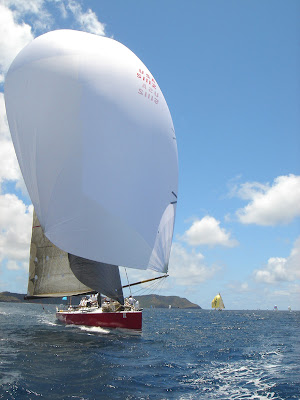 First I would just like to thank people for the concern, suggestions and thoughtful comments about the situation spoken about in my last post. Let’s move on:

The 40th annual Antigua Sailing Week starts this weekend with all the excitement that one of the world’s biggest sailing events is expected to bring. So far there have been several massive pre race parties and I have been to two of them.
The racing action starts on Sunday and you can check the race and official party schedule on http://www.sailingweek.com 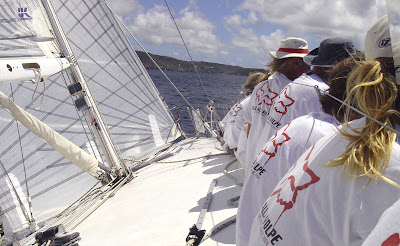 I have actually raced a few times and can tell you that being out there racing each day and then expecting to keep up with the hard core party schedule isn’t easy. Sailors will be sailors though and as you would expect the amount of alcohol consumed in Antigua this week will be staggering just like the sailors.
The first official party was the Antigua Distillery free rum party which was held inside the Nelsons Dockyard on Thursday evening. Cavalier Rum which is what I call the Antigua distillery has been a big sponsor of sailing week for some time and has been throwing a free rum party for years now. The free rum party has been going on for much longer though and was originally started by Mount Gay. When the Barbadian rum was dropped as a sponsor Cavalier took up the position and started having the “official” free rum party over at Pigeon Beach. From the start the party was massive and everyone was there each year early. If you want to see Antiguans on time just give them the hour when u will start serving free rum. I was there at the front of the line each year. The party on the beach was wonderful and the atmosphere set the tone and standard for the rest of Antigua Sailing Week. For some completely crazy reason Cavalier decided to move the party from the beach into the controlled environment that is Nelsons Dockyard. I think the problem as they saw it was the fact that it was more difficult to ultimately control the party down on the beach whereas is was totally controllable at Dockyard. Well not only was it controllable but it was also not as good. This year the numbers for the party were tiny compared to the old free rum beach parties and even the atmosphere was tamed down. That didn’t stop me from making sure that they off loaded their free rum. It was fun but I think that it needs to be sent back to pigeon beach next year. After the last drop of free rum was consumed people still stuck around for a few more hours until the massive Soul2Soul Back 2 Life party at Abras got started with the famous UK DJs.
The next day was an early tour so lifting my head off to shut up the alarm at 6:15 was not too cool. Yesterday was the second free rum party organized by the original free rum bad boy Mount Gay Rum from Barbados. As usual they put on a massive free rum and free hat party at Galleon Beach where almost all the racers as well as half the island turned up to get wasted. Woooo hoooo!!! What a party…the setting and mood was perfect as usual and I think everyone had a great time……The crazy thing is that even though this party is not an official one…it is always the best and most organized of all Antigua Sailing Week events. The organizers need to stop trying to change things and just use some common sense. Anyway, long before the party ended I got a water taxi back into Nelson’s Dockyard where my ride was. (I didn’t drive.)
The sailing action begins on Sunday where over 215 yachts race half way around the island to Dickenson Bay where a massive party will be set up. 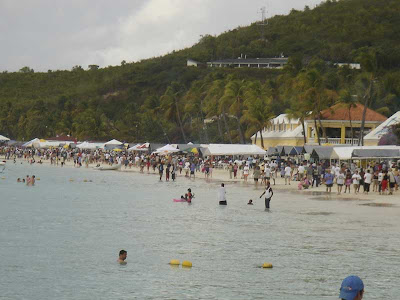 My two boats are chartered by long time local customers who want to follow some of the racing and end up at Dickenson to party. Everyone on the island who has a boat will be there and as is usual there will be way too much alcohol consumed once again. I am off to the Tobago Jazz Festival and will be missing the action here. Will try to stay in touch as I will be taking my laptop too.
Posted by 365 at 11:40 am