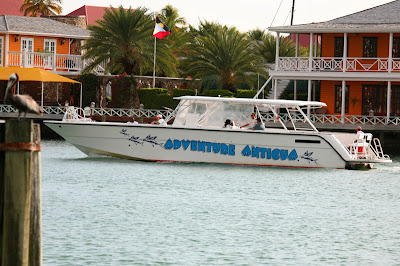 From: Michael Breen [mailto:xxxxxxx@comcast.net]
Sent: Friday, April 27, 2007 10:02 AM
To: Antigua Adventures
Subject: So sorry to hear about the theft

I read Eli's blog and it is obvious how upset Eli is about the situation. I tried to post this reply on his blog, but I couldn't get it on there for some reason:

As a frequent visitor to Antigua and frequent guests on your tour boats, I am SHOCKED by what happened on the boat. First off, never ever for even a fraction of a second would I consider that it was "theft by crew". I have never met a more professional bunch of people in my life, not only in Antiuga, but any other Caribbean island we have been to. I hate to say it, I really don't know the person "victim", but it sounds to me like they just had no intention of paying for the trip from the beginning. It's also very suspious to me that they didn't want to file a police report, you guys are TOO nice sometimes. I would have insisted on it as a business owner, but hindsight is 20/20. I just wonder how many other tour operators this "victim" stole from in Antigua. If he had filed a police report, he wouldn't have an oportunity to rip off another tour operator. I guess he doesn't know how small Antigua is and that, I'm sure, you will be hearing that he did this to other operators as well. As a business owner, we have always felt the benefit of doubt goes toward our clients, but times have changed in the last few years. We don't require payment until peoples taxes are done, we have standard rates, and I can't tell you how many people try to tell us that we quoted them a cheaper rate on the phone. This has become a "give me" society and it seems everyone wants something for nothing. It has probably reached the point where you will need to collect from everyone when they get on the boat, as a tourist I EXPECT to pay upfront. Many times I have seen people get on your boat and immediately get their $ out for payment, I really don't think people would be offended if you asked guests to pay when they board the boat.

I'd be curious to know what nationality this guy is? I wonder if he would have the balls to post it on the newgroup? Eli, your family and friends, know the truth and I'm sure there are many out there like Michael and I who will come to your defense if you need it. I think your long term reputation will sustain you just fine. I don't believe it happened, I believe it was a big mouthed bottom feeder who wanted something for nothing.

I agree...I don't think the "victim" had any intention of paying, especially because he made a big scene. When someone makes a scene, the first reaction is to calm them down and move them along and the real issue is lost. I am assuming he is American (as am I), and I am embarassed at the way I have seen Americans act in Europe, the Caribbean, and Mexico. Although I have been to Antigua, I have not been on one of your tours but enjoy your blog and hope to return to Antigua again. You are clearly a good person and care very much. My input is that you should see this as an isolate unfortunate event and just keep doing things as you have been.

All smells a bit fishy (sorry) to me. Why did he choose that moment to announce he'd been robbed? Why only the exact amount of money? Did he not take some for emergencies or tips?
If he was that paranoid about his stuff, which seems likely given his apparent need to cling onto it all day, surely he would have taken greater security steps than leaving it up top when he went below? You can explain some of this stuff I suppose but a lot still seems too convenient...

It's a shame but I think in a business like this you're always going to get some wa**ers who negatively exploit the way you treat your customers, but there isn't much you can do.

It was unlucky that Wanluv was so new; with the greatest respect to the guy it seems Frances and perhaps you entertained, if briefly, the suspicion that he might not be entirely beyond reproach.

You could alternatively take valuables, including cash (which you would count in), and store them somewhere secure at the start of the day.

Other than that I'm not sure there's much to be done. Guests having cash on board is good for the crew tipswise, and like you say it's never really happened before.

He must have been American. No Englishman would be so frightfully gauche as to announce anything like that in public. A discreet word to the captain would have been appropriate, had the story been true.

My husband and I were on your boat in June, 2006. In fact, our wedding party was 14 out of 16 on your boat that day so I cannot speak of ever feeling uncomfortable with leaving our bags out, nor would I with your staff. As far as a solution to your problem, it would almost seem better to have people mandatorily store their bags underneath and lock it. I dont think it is any of your staff so this would allow the rest of the guests to feel safe if their items are stored away. I know that is what we did, not because of feeling unsafe, but for the sheer space saver of having your things underneath.

On a side note, we stayed at Sandals for our June trip which was again, our wedding and honeymoon. On the night of our wedding, my husband and I were dancing in the court yard and our guests were invited to join us. Also feeling safe on the resort, my mother in law, left her camera with our wedding pictures sitting on a table in order to dance with us. With a quick turn on the dance floor, the camera was stolen. As far as we know, someone walked into the resort from the beach, sat down at the table (we did notice someone sitting there) and then quickly walked out and caught a cab out of the resort. I dont know if this is something that would be possible when a crew member might be underneath that someone could stop by the docks or whatever, but even in a private resort, we were deprived of our wedding pictures.

I dont know if this helps or not, but my point being that please do not take this too much to heart as we truly enjoyed your hospitality and trip and plan on taking it again in December when we hopefully return to Antigua. I would not blame you though for collecting the money and storing all items underneath for precautionary reasons. As someone who has had things stolen, I would certainly ablige to any protections that the event coordinator requests. Hope to see you soon, Cheers!

guys thanks for your time and comments.

As a American, I take offense at the posters who suggest that an American did this henious act. That being said, I think whoever did this and if they did is a lowlife even more so if the guy lied. I am not really proud of being an American but to judge us all on a single incident is just as bad as the person committing the alleged crime.

Hi, I was on the tour last week when that happened, and first of all I have to say I loved the tour-it was the highlight of my entire trip. The crew did a great job. I felt I had to post after reading Eli's account.. Yes the man was American (so am I, yes we can be a bit crude, but that has nothing to do with what happened) but I was standing there most of the time when it happened and from what I saw he was fairly discrete, NEVER yelled, and was not rude at all, if he was rude, it was not in front of any guests. Anyways, I never once thought it was the crew, or anybody on board, but then who? I watched the guy for a bit trying to judge if he was trying to pull one on the staff, but I just couldn’t imagine that he would have the “balls” to come up with that story. He just seemed like a normal guy, so I really don’t know what could have happened. My hope is that he misplaced his money and never brought it to begin with, regardless Francis handled the situation professionally.
Anyways, I just wanted to add my 2 cents, and again I had a fantastic time on the tour, and when I come back to Antigua, I will definitely do it again.

As a frequent flier on the tour, I wouldn't be at all bothered if we had to pay up front. In fact in would be good to get the business out of the way so we can all get on with enjoying ourselves.

I guess the truth will never be known. All we can do is learn from the experience.

Hi Francis, Tony and Wan Lovv!
My family (Darlene,Jody,Chris and Shana) took your tour the 23rd or 24th(not sure,vacation!@#$%^&*()) and we had a wonderful time. It was very educational, beautiful and fun.It was a gorgeous day with great people.We learned alot about fragile ecosystems. My kids thought it was awesome and its something they will never forget. You all are very professional. The food you served for lunch was great, the most I had eaten at one meal, on vacation.It was my first time snorkeling(thank you Tony)and I loved it. I got a great picture of Wan Lovv. Should have got one of Francis, my daughter thought he was very handsome and she wants his job!
The trouble you had that day was very sad.I don't think for a seconed that any of you would steal from anyone! Unfortunately there are good and bad people everywhere, all nationalitys. You should definately have people pay before you leave.People should also be smarter about keeping their money on them or hiding it well and don;t bring an excesive amount as there is no shopping on the tour. I wish I had booked directly, $140US for two was cheaper and I would have had more tip money as I didn't bring enough.I feel bad about that.
Just wanted to tellyou what a great time we had and hope to see you all again someday(coming home to snow was depressing). I'll try your website to purchase two large t-shirts as you were out when we were there. Take Care, Darlene
cybergro@sover.net

I never went on your tours yet (but I tryed many times) and I do not know how many people get in the boats, but maybe you can put some small lockers with keys just for valuable things. The key holders could be with the ones to strap in the wrist.
I think it still is a great idea to pay after the tour.

Eli, If you think he was trying to pull a fast one keep his name/details on file in case he tries to book again another time.

Eli, I know how hard your work to promote and produce a safe and fun product for the consumer. What I would suggest is that your recommend no tourist bring cash or valuables on board and the crew have a no cash policy. Let the guests bring cameras etc..and that you are not responsible for any lost, theft or damage.