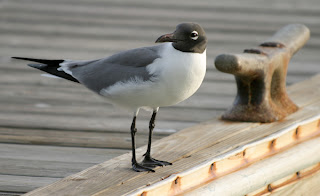 Several weeks ago I wrote saying that spring had arrived and each day more and more signs of spring show up around Antigua. It’s such a lovely time all over the world depending on when it actually happens, and Antigua is no different. When we were in Barbuda for the Easter holiday one of the biggest tell tale signs that show that winter is over was the arrival of Laughing Gulls. These gulls arrive each year around this time having flown down from the South East Coast of the USA where they scavenge in the winter. They arrive here as huge schools of pilchards and other tiny fish are hatching out. You will see them feeding all around the coastline in big flocks trying to catch little fish. They will also feed on anything else they can get their beaks on and if you are here in the summer you will have to guard your lunch carefully if you are picnicking on the beach. I have seen them clean someone’s plate as they walked off for coffee leaving their full English breakfast unguarded. Watch out!! These laughing gulls start laying eggs some time around the end of May on many of the off-shore islands around Antigua. Just this morning I was on Dickenson bay beach meeting the eco tour when I heard one of the beach vendors complaining about “these dam birds……they make so much noise and harass the tourists when dem ah eat.” I thought that was pretty funny.
There are more funny things about them though. When they are making their nests you will see many of them jockeying for a good position on one of the islands and they look and sound like they are arguing. I have sat there and had a good laugh myself as they appear to scream and shout at each other. 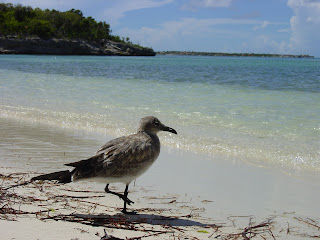 Once they have nested and the little grey chicks begin to leave their nests something amazing happens up around Bird, Exchange and Rabbit Islands. We often see a single adult sitting on the water with about 12-20 little grey juveniles screaming instructions…or so it appears. I am not kidding either. If you come here in August or September you will see this for sure. Just ask Tony to show you the laughing gull school and he will know what you are talking about. These birds are also very aggressive with other birds and we have seen them actually eat other small birds like finches and hummingbirds. I have seen a large flock of adults almost work together to push a small bird over the water in order to kill it and eat it. The crazy thing is that only one gull gets to eat it. Spanish point in barbuda is where we have seen that. These birds will also steal and eat other bird’s eggs. They are nesting the same time as the tiny least terns unfortunately for the terns. They also will eat little hawksbill turtles if they get the chance and you will hear about that problem on the eco tour if you come. All in all these laughing gulls are hard core survivors and although they are pests to many they are interesting in their methods and do signal spring’s arrival. Don’t get too annoyed with their laugh!
Posted by 365 at 12:32 pm