First, let me just thank the thousands of people who have viewed my blog entries over the past week. It's been a crazy time for LA (little Antigua) and I wish i could have spent more time keeping you up to date. Anyway, the good news is that the "run" on Bank of Antigua (owned by Allen Stanford) seemed to slow down before the weekend close, and with word that the ECCB is taking over control of the Bank starting today we can further be assured that some needed control will be gained out of this move. Stanford International Bank is another story though. The Prime Minister Baldwin Spencer says he will cooperate fully with the SEC on their probe into the Antiguan registered off shore bank. His attorney general didn't sound so optimistic echoing some of the issues mentioned in my last blog entry.
Found in this damning New York Times piece, AG Justin Simon, said "I’m sure various other offshore companies are going to worry exactly how far S.E.C. control will go.” YUP!
Anyway, while all of this tangled web of organized chaos continues there can be no doubt that people all over the world will be touched in some way. There are depositors at SIB from over 100 countries according to Allen Stanford who boasted about that sort of thing in the past, and there are about as many countries involved with off shore banking who are as worried with the new SEC as the depositors at SIB. According to Melford Nicholas (leader of the OND political party here in Antigua) writing about this story on my facebook page, "I think we are at Act 1 Scene 1". In related news, my company got a private charter from a journalist who wanted to do a private version of the Eco Tour. As we usually do on the Eco Tour, i took them into the North Sound to teach them about the history (ancient and modern) as well as the ecology of the area. Of course, like all of our Eco Tour guests this week, he was extremely interested in what we had to say Allen Stanford's interests in the area and especially about Maiden Island and Guiana Islands. While we were up there he asked me about the big white building to our south. I told him that it was Mr. Stanford's boat house and his new EC $67 million dollar (US $26 mil) boat yard which is just being finished up. As it was a private charter I went where he asked me to go and over we went. The marina is like all of Mr. Stanfords buildings.... top notch. Unlike most of his colonial type architecture here on the island this marina was an ultra modern (James Bond) sort of thing, and I assume that his huge boat was inside the NASA style hanger or boathouse. The last bit of dredging was taking place and there was a huge cloud of dredged up silt in front of us. I didn't get too close, but what caught my eye was something that had nothing to do with Stanford. Crabs Peninsular is a key commercial port in Antigua with the Antigua Brewery, the desalination plant, Antigua Power Company, Stanfords Marina, a cement loading and off loading facility and other commercial type operations. What caught my eye was a huge sand barge filled to the brim with well over 200 truck loads of pure white Barbuda sand. I know they had over 200 truck loads because for the past 15 years Barbuda sand has been coming from Barbuda to the condemned High Point jetty where i grew up. This jetty was built by the US government in the 1930s i think. Anyway sometime in the mid 1990s sand from Barbuda started arriving there. Up until that point Barbuda sand has been shipped all over the Caribbean and was always imported into Antigua at other commercial ports. Back in the 1990s the opposition accused many within the ALP ruling party of profiting from the mining of sand calling it just another corrupt way for the ALP leaders to get rich. The Lord Nelson Beach Hotel which was owned by my grandparents tried to get the new landing place for sand into Antigua moved complaining that it was damaging their business. Sand trucks raced up and down past the hotel after collecting sand from the massive barges and guests checked out time after time complaining about the noise and dust. Petitions from guests and residents nearby was ignored. With the UPP opposition complaining about corruption and the residents and hotel complaining about noise, dust, and speeding heavy machinery nothing changed. All this time poor little Barbuda was getting scraped clean of it's land. There can be no place on our nation where "Land is sold off" in a more barbaric way than in Barbuda. 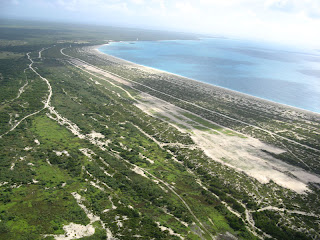 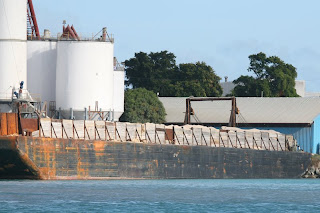 From this photo I took late last week at Crabs Peninsular, you can imagine how much sand is packed on. I imagine you could make a pretty nice beach with this sand alone, but as i said earlier sand isn't used for making beaches here in Antigua although many other areas around the Caribbean have used Barbuda sand to help their beaches. The sand here is used primarily for construction just like the sand that has been dug up from Pinchin Beach, Farley Bay, McKinnons Swamp, Darkwood Swamp and recenlty Ffryes (a.k.a Fry's). While many have gotten rich the beaches and their fragile and related ecosystems have suffered. Biodiversity in Barbuda has been hit as well and little is known about how badly the island's ecology is being effected. No one involved in any of the mentioned atrocities have ever been punished in any way. According to several people i have spoken with close to the Barbuda sand mining operation, it is alleged that sand from Barbuda is often traded instead of being sold. These people say that persons or companies in Antigua sometimes do business in Barbuda for the Barbuda Council in exchange for sand or barge loads of sand.
According to John Mussington, the 103 acres of land offered that were set aside in the recommendations from the Ministry of Environment has long ago been mined. He says that according to his GPS calculations on the ground, the borders of that 103 acres of land were long ago passed and dug up. John agrees with me that since 2006 there has been a dramatic increase in mining in Barbuda. The more things change in Antigua and Barbuda the more they seem to stay the same. I know that Mr. Maginley will be reading my blog later today so I will ask him once again to consider something:
John, if you say you have no control at all over what happens with the sand mining operation over in Barbuda where between 10 and 15 people are employed then so be it, but don't tell me that there is no other place for sand to come into our country. Notice i didn't mention anything about the even larger barges of gravel that since 2006 have been arriving at High Point almost as regularly as the sand. 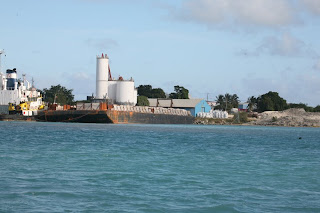 My photos show sand arriving at the Crabs industrial port. Please tell the people you are asking to vote for you that you will work harder to get all the sand and gravel barges to go there. The restaurants, hotels and residents who exist right next to the condemned high point jetty and along the path of the speeding trucks want you to do something about that at least if nothing about sand mining.
If anyone thinks that something i have written here is untrue or if you feel you would like to add more that i missed please email me at elifuller @ hotmail . com and let me know. You are all free to comment here as well.
Posted by 365 at 9:37 am

i have given up counting the number of sleepless nights i have had because of nocturnal heavy duty machinery activity up at the 'big jetty'! - but my disturbed sleep is nothing in the general scheme of things, unlike the devastation caused to our environment by the sand trade..
i would vote for anyone who would give this issue the serious consideration it merits.

From my perspective, there is an alternative source of sand, but of course will need the political will to stop the supply of sand from Barbuda. the source is Montserrat. Tons of sand and gravel are washing down from the denuded slopes of the volcano in the Soufriere Hills. There is a company there excavating it and shipping it off island on barges. And its coming from an area that is already essentially a wasteland, so the environmental impact is minimal.
The alternative sources are there, we just might have to pay a little more for them. Which also means we will have to guard our beaches even better from unscrupulous persons who have no care about anything except their own good.
Greg Scott

Eli, you are showing up everywhere!

keep up the good work.

A very good account of the facts, the new Council in Barbuda proposed having an agent to monitor and regualte the sale and distribtion of this resource whilst alternative's were explored to underpin the island finances. Sadly the local Company that has controlled this activity swayed this responsible decision in favour of continuing this rape and pillage of Barbuda!