A week after the fantastic Antigua Classic Yacht Regatta finishes the Antigua Sailing Week gets going. ASW is one of the world's most famous sailing regattas with boats from around the globe sailing and partying around the island for a week. There used to be a fun filled stop in the middle of the regatta which i think made the regatta even more famous and for sure more fun. Lay Day was probably the most memorable part for most of the people taking part in the regatta. In recent years the organizers seem to have lost touch with what the regatta was all about and the numbers of entrants has fallen. Personally I think there needs to be a dramatic change in the way the event is now run. To me it needs to go back to how it was run in the past when it was most popular. It's too disorganized at the moment in my opinion with entrants and people who fly in pretty much left on their own to decide what to do. It's not uncommon to see five different hifi systems playing different music at the same venue. Much could be said about the regatta organization and especially their lack of interest in the entertainment side of the event, but I will just say that the regatta used to be way way way better than it is now. It's still loads of fun for people who haven't been to it before and nearly as much fun for those who have done it in the recent past. Today there are two short races held off the south coast. Division A which looks like it is the faster more professional racers will do a "windward leeward" race like this one: 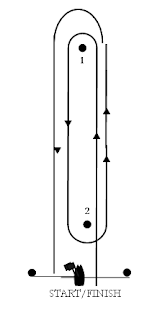 Division B which generally are the slower boats will do this one: 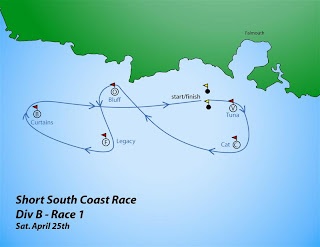 Tomorrow is the race where local people will turn out in numbers. Last year the organizers decided for some crazy reason to change the final destination from Dickenson Bay to Ft. James beach. I say it's crazy not because i think they should have stayed at the ever more cramped Dickenson Bay, but because they moved to a shallow unprotected area that doesn't have much going for it. Most boats didn't even attempt to come to that bay last year and the beach party was made dangerous by some swell that was crashing on the shore. Several smaller power boats sank on the shore after dropping off people. This year they have decided to back and try it again with Division B stopping there and Div A going all the way back up to Falmouth. Great idea to separate the after sailing destinations. NOT!
This is the race that Div B will be doing ending up at Ft. James: 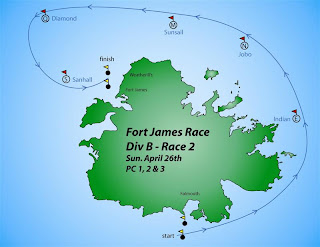 Here's division A's race below. This one won't be such a big deal for some of the ultra fast boats in the division but for some of the smaller slower racing boats this one is going to be a killer. With the tacking I estimate this race could be as long as 70 miles and could take some of them 10 hours. I hope the forecast stays windy otherwise it could be 12 hours for some of them. Ouch! 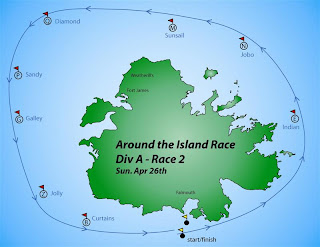 Anyway, we are going to go out on Xtreme. Like many people who have power boats we are just going to have a look at some of the sailing and generally enjoy the Sunday. Forecast is windy but the swell on the lee side should be smaller. Last night was the Mount Gay Red Hat Party which is not an official party but is usually the best party of the entire regatta. It was yet again an excellent party. For more info the regatta (if you can navigate through the site) go to http://www.sailingweek.com/
Posted by 365 at 11:17 am