For as long as i remember the famous Antigua Sailing Week started with a bang with it's first race finishing at Dickenson Bay where a huge party would follow. People from all over the island would come down to take part in the party action or to cater for the revellers and tired sailors. Everyone loved it except the hoteliers on the beach. In fact, there was usually a week's cleanup after each visit by sailing week with bottles and plastic cups turning up for months afterwards. Because of the lack of promotion, most hotel guests had no idea that the even was happening and would turn up and find their idyllic beach covered in people and their beautiful sunset obscured by yachts. Of course this was a once a year event that put money into our economy and joy into the hearts of many. I would venture to say that there have been many people who came back to stay in hotels after coming to Antigua for the first time to sail in "race week". Anyway, with the new bunch of people running the Antigua Hotel and Tourist Association (website) we have a new idea of how Antigua Sailing Week should be run. The AHTA after all owns Antigua Sailing Week and runs it. In the old days we had people in the AHTA who knew sailing and knew the history behind sailing week. It seems to me that this has changed and that the people running the event just don't get it. We have heard this sort of sentiment for the past few years as the event has gotten worse and worse. Of course the people directly involved in running it say this is totally untrue and that the event is better than ever. I guess "The Event" has to be clarified as the overall week of sailing and festivities surrounding the Antigua Sailing Week. I am sure that you will have a hard time finding a vendor that took part 10 years ago who is happy with how the event is run now.
To me, this is where the guys running the event miss the point. Don't ask a sunburned sailor if he/she thinks the event is fantastic. Ask people who took part in the racing, or vended, or just partied, or ran a guest house, or operated a water taxi, or ran a land taxi 8 years ago. Compared to how it was back then, the ASW of the past few years has been nothing close to as good. Local people don't nearly make as much money. The parties are totally disorganized with the organizers acting like they are not interested and would rather have sponsors and others organize their own events. Even the lay day was left to die. Over the past five years it seemed as though the organizers were not interested in the "Lay Day" which for almost 40 years was the day off in the middle of the week where boats could do repairs, rest up and take part in a huge afternoon organized party with all sorts of team competitions culminating in an infamous "wet t-shirt party". That kind of thing wasn't for everyone, but there were a huge number of people who felt that Lay Day was a major part of what made Antigua Sailing Week the event that was. In fact, the model that ASW showed was copied by sailing events all over the world, many of them rapidly growing to almost look like ASW.
For whatever reason a few years ago the ASW and the Antigua Yacht Club couldn't come to an agreement on the Lay Day celebration and ASW moved the event to Pigeon Beach. The move upset many and the it wasn't a success. There were few people there. Two years ago ASW decided they were not doing a lay day and didn't have it on their schedule. At the last minute with all sorts of people complaining they had it again at Pigeon with even worse results. It sucked and not many people turned up.
Last year the ASW decided to have the official Lay Day party at Shirley Heights of all places. This move proved that they had no idea whatsoever about what this part of the event was for. Does anyone have a good video of the old Lay Day that they can lend to the organizers of the ASW to show them an integral part of what made the ASW unique? Shirley Heights? Cummon, get real! The result was so bad that this year Lay Day was officially killed by the organizers.
While this was going on the organizers killed another integral part of Antigua Sailing Week. Dickenson Bay day was murdered. Instead of moving the vendors down to the West side of the beach past Buccaneer Cove where there is plenty of space and no hotels at the moment they just moved the entire even to Ft. James showing once again that the ASW organizers knew nothing of the history of ASW and what made it special. The move also showed that they knew nothing about the waters there either. For one it was not nearly as protected there and when there is ground swell which happens quite regularly at this time of year, the place can be dangerous. Another thing that they somehow missed was how shallow it was. Of course the one road in and one road out seemed to miss them as well. Overall the move to Ft. James last year was the biggest mistake made in Antigua Sailing Week history. 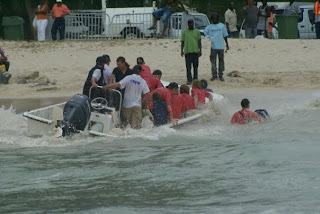 It was extremely dangerous getting to the shore for a bite to eat after the racing with many of the water taxis getting "swamped" as seen here, and some sinking. 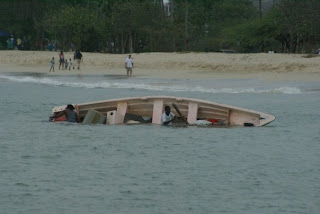 Many sailors were tossed out of the water taxis as they were thrown on to the beach and nobody went swimming at all. 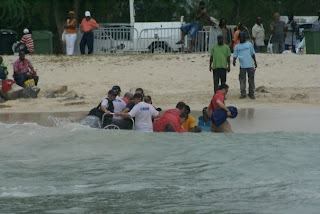 The event was almost as bad of a flop as some of the flops that were seen while getting ejected from the water taxis. Letters in the local paper were written and complaints were heard island wide. For sure they would never have it there again right?
Wrong! They went right back there.
But to make something that was bad even worse the organizers decided to send some of the yachts back to English Harbour on the round the island race instead of having that race on a day when all the yachts would be in Falmouth. Maybe i missed that last year and didn't notice but with yachts anchored in Dickenson Bay, Ft. James, and in Falmouth the after party was bound to be another flop. Thankfully there was considerably less swell, but it was still too dangerous for us to get close to the beach at Ft. James. We were out on Xtreme and parked up at the very murky dirty water between Millers and Russels for about 30 minutes and then decided to move back to Dickenson Bay.
I have to admit that i was pleasantly surprised that even though the AHTA and the organizers of ASW did their best to kill the Dickenson Bay day this year, we can only call it "attempted murder". Yachts, powerboats, water taxis, party animals, swimmers and spectators of all of the above turned up at Dickenson Bay in huge numbers despite the attempted murder of the days event there. The party was a great one and i am sure that the owners of The Beach Restaurant who had planned for the revolt were extremely happy. It just goes to show that Antigua Sailing Week isn't just about sailors. As you can see from this little video:


the turnout was good even though the venue was not an official stop on the ASW schedule.
As the sun started to set the yachts finally decided to leave the nice swimming and relaxing of Dickenson Bay and pulled anchor to make the move down to the rolly shallow anchorage off Ft. James. I understand that the two live bands playing later in the evening had a hard time getting people to dance and the mood was more one of hanging out that partying. Either way, local people and sailors turned up to support the vendors after the sun set. It was not a raging party by any means though. The sailing seemed to be much better than the days party action with perfect winds and good sunshine. We motored alongside some of the fastest boats in the fleet outside Diamond Reef. A Yachting World reporter was on the boat we followed for a while. In his article here, he said it was doing 18 knots but we clocked it at speeds of up to 20 knots as she screamed down on broad reaches. After we left them to go and see the first finishes of B fleet we noticed that the finish boat hadn't had a chance to anchor up before the first boat crossed "the finish line". These new boats are either too fast or the race committee was a little too slow. Anyway, the rest of the fleet crossed properly and came in to Dickenson afterwards. Tropical Studios has some fantastic videos of the old Antigua Sailing Week events and i wish that the AHTA would sit together and look at them. The modern ASW could learn quite a bit from those vids. This event is getting smaller and smaller while many other events seemed to have grown in recent years. This year The St. Barts Bucket and the Antigua Classic Regatta grew and put on excellent regattas with the after sailing events as carefully organized as the racing was. Sailing Regattas in the Caribbean are about racing as much as they are about partying and I personally don't think that ASW understands this. There are many other things wrong with the management that I could go on and on about, but instead will just mention a few things.
While there are excellent world class photo and video professionals involved in yachting here in Antigua ASW uses people from abroad. This is strange and unfair. While there are excellent professional powerboat charter companies here registered, licensed and insured to do charter work, ASW charters boats to set marks and carry press that are not.
The trickle down effect of the old ASW put plenty of money into everyday Antiguan's pockets and I think this is also something that has changed.
I am sure that one or two of the AHTA people will read this. This message is to you: Go and look at an old ASW video. Call Tropical Studios and buy a copy if you don't have one. It was way way way better than this.
Posted by 365 at 7:49 am

A LITTLE BIT OF PARADISE said...

ELI, I AGREE WITH EVERYTHING YOU HAD TO SAY. JUST DIDN'T LIKE THE KILL AND MURDER REFERENCES. TOO SENSITIVE A TOPIC AT THE MOMENT. MAYBE YOU CAN GO BACK AND CHANGE THEM.

I too MISS Dickenson Bay. My family and I went to Fort James last year for 40 min and left to head down to Shirley Heights to see David Rodigan. Fort James was a sham compared to the good ole days of Dickeson Bay.

Eli......Very well said!!!!!!
I agree with you on every topic.
There are some great pics in "A little bit of paradise" book of the old sailing week events including lay day..
Gilbert Boustany