Our trip to The West Indies Regatta part 1

Alexis Andrews of Antigua, the owner of the beautiful and fast Carriacou Sloop Gensis got together with LouLou Magras of St. Barts and came up with the idea of having a regatta dedicated to boats built in the West Indies. 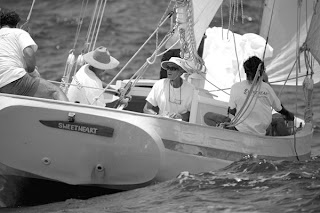 The West Indies Regatta was born. Some day they could have boats from the Bahamas in the North all the way down to Trinidad coming to this event. We know that all of the islands built wooden sailing vessels historically which were used to quickly transport cargo from one island to the other, and recently we have seen a resurgence of the passion involved in the idea of sailing these magnificent boats. It was that kind of passion that Alexis and Loulou shared in coming up with the plan for this regatta. 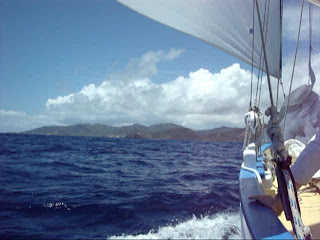 Antigua already had a bunch of boats built on the Grenadian island of Carriacou and almost all of us decided to take our boats to the inaugural event in St. Barts. 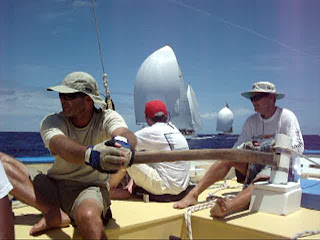 Our boat, the Ocean Nomad, still glowing from it's win at the Antigua Classic Yacht Regatta a few weeks before was ready for battle once again. 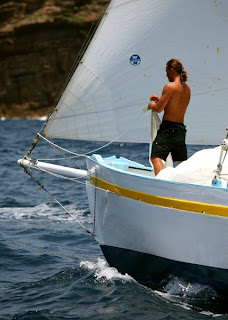 Genesis and Sweetheart who we had narrowly edged out to win the event were as eager to finish on top this time too. Martin on the newest boat in Antigua "Good Expectations" had learned plenty about his boat and was ready to get some better results too. The event was scheduled to officially start on Friday May 1st so we got some of our core crew together and set sail from Jolly Harbour on Thursday night after dinner. The winds had dropped down to almost nothing and in order to get there in time to register, clear into immigration and have b'fast we decided to motor sail down. I hadn't done motor sailing down wind on Ocean Nomad before and although it wasn't as quiet as I had liked it to have been, the constant noise from the engine somehow helped me to sleep in between my watches. In fact, it was the best sleep I had had while at sea on the sloop since we had left Carriacou a year before. Our crew for the ride to St. Barts was Iain of http://www.acquafilms.com/ who was going to be shooting the event, Nik my former partner in http://www.kiteantigua.com/ and our "rock star" crew member, Jason the Ocean Nomad "first mate", and Guilliano our dedicated Adventure Antigua fishing and sailing adventurer. The sky wasn't always clear with some upper level clouds streaming above us for much of the time, but when there was a break in the clouds the stars were overwhelming. Sailing down wind from Antigua is always extremely enjoyable and coupled with the phosphorescence, the shooting stars and flashes of fleeing flying fish we all enjoyed the ride immensely. About eleven hours later we were dropping sails in the lee of Gustavia and dodging the huge green turtles that seem to live there without fear of all the boats that also share the beautifully clear waters. To be honest, although the waters were clear, there was a tinge of green that managed to find it's way into the harbour from outside. Mykl was telling me about a huge "bloom" of algae which had found it's way up here from the South American coast and I doubted the facts surrounding the article she read to me. Now i was seeing it first hand. Anyway, thankfully it was gone by the next morning. Here is info about it from the Virgin Islands.
After clearing in and getting some food in us we decided to take the tender over to the famous "Shell Beach" where we could have a long swim and cool off. With almost no wind we were overheating quickly. Shell Beach didn't disappoint and Guilli and Jason who hadn't been to St. Barts were blown away by the new beauty of it all. It wasn't just the pretty shells that caught their attention. Later that afternoon we hung out on the pier where all of the boats were docked stern to and watched slide shows which presented old photos of the traditional boats sailing and carrying cargo to and from St. Barts as well as the Carriaco Sloops presentation done by Alexis. One of the sponsors was The Grenada Chocolate Company which also showed a video of their excellent "green" company. The chocolate was very good too. I think i would like to get some to offer on my tours in the future. After a BBQ right there on the dock we migrated over to Baz Bar for some "ti punch" and some great NYC live jazz. It had been a long night and day and with all the excitement it didn't take long for us all to be tired and ready for bed. There was racing to be done the next day...
Posted by 365 at 10:41 am

Sign me up for some of that Grenada Chocolate! I just checked to see if we'd be in Grenada before or after we see you next January - it's after - I'll definitely be looking for chocolate!