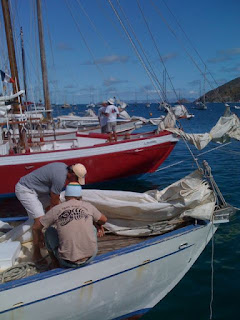 So in my last blog entry i spoke about our sailing trip down to the West Indies Regatta and our arrival on the beautiful island of St. Barts. The next morning we woke up super early and took the little tender over to the north side of harbour where we could have a short walk to the boulangerie (bakery) which is owned by my fishing friend "Eric" seen in the pic below. I have to admit that until you have been to a french bakery you haven't been to a good one. There were what looked like hundreds of different items to pick from and we kinda just guessed and took a huge variety of things. B'fast in St. Barts every morning was fantastic because of this place and we usually were there before 7 am each morning. Everything was excellent and if you ever go there ask for Eric's boulangerie. I can't remember the name at the moment tho. In the photo above of "Wa'appen" you have Christian (the owner of the boat) on the far right, then LouLou next to him, a friend who i can't remember in the middle and then Eric on the far left. I had spoken to Christian about the regatta and it happened that he was going to Antigua the same weekend. He told me to give LouLou a call. LouLou wanted to come sailing too. The night before I had seen another former fishing tournament friend, Gaston, who also said he would come out with us. We had a good crew and with the local fishing boys with us I knew we would give the rest of the fleet a hard time. Gaston and LouLou had been sailing many times before and were a huge help. There was only going to be one race on Saturday, and all the boats got ready just outside the harbour sailing back and forth near the start line. 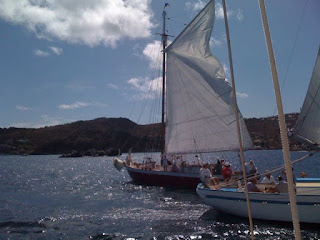 We had a great start and were leading off the line. There was a quick reaching leg with a gybe leading to a very broad reaching leg. We took a very long time to get our big down wind sail up and Alexis who had his up very early managed to catch up and pass us slightly. The winds were very shifty and light and we managed to catch up once we got our big "jenny" up. At the mark Alexis on Genesis gybed slightly wide trying to keep his spinnaker up. We had dumped our "jenny" and gybed tight passing him quickly. It was then some upwind work to a tiny mark of the north west end of Gustavia and then a long reach up to the south end of the island to tack around a mark and tight reach back to the finish. Our lead was never properly threatened again and we crossed the line very happy indeed. We were back on the dock by about noon and ready for some lunch and a swim once again at Shell Beach. Gaston insisted that we all come to his lovely home for some food and relaxing. The hospitality from the locals was fantastic and after far too much food and some great red wine we decided to hit the beach once again. 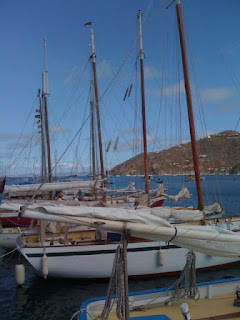 Shell Beach was close to the boat and this time we walked. Nik and I chilled in the water while Guilli and Jason drank beer and relaxed in the Brazil beach bar or whatever it's called. LAter that night we hit Le Select where Tuey and some friends were playing. They had flown in especially for this regatta being family and friends of one of the boat's owners. The jam session was excellent and at the end of the night some of the crew from the boats joined in the last song. "You can't always get want you wan't" was the chant that even Jason managed to join in with. What fun! Race number two and three the next day were going to be a little tougher with Alexis on Genesis and all of the other boats determined to better.
All of the photos seen here except the one of my fishing friends were taken by Bruno De Benedicts from St. Barts who raced on Genesis.
www.adventureantigua.com
Posted by 365 at 8:47 am