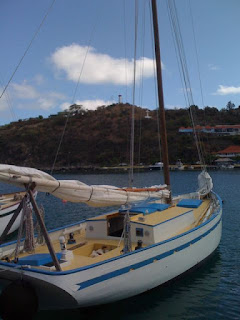 The second day of racing in the West Indies Regatta started out with the usual pre race jostling. The night before Georgio had looked at the weather forecast for Monday and decided that he wouldn't stick around. Before we left the dock we said our farewells to him and his crew. Now the race for top honors was more focused on our boat, Ocean Nomad and Alexis Andrew's Genesis. The other boats even with their new ratings would have a hard time beating us overall, but anything was possible. We all took on extra crew as interest among both St. Barts visitors and locals had peaked. We had one more local friend of Loulou and Gaston come with us. "Gi" hadn't done much sailing but was up for some fun. We also took on two tourists who were very much in awe of the beautiful Caribbean boats. Alexis had a big crew of mostly the same makeup as did Frank on Tradition, and the Nevis boat "Alexander Hamilton". The plan was to race around one of the off shore islands and finish at a lovely beach called Colombier where we would all have lunch together. I was eagerly awaiting that but we had to first win the race!! All the photos here were taken by Bruno De Benedicts who runs the lovely shop KOKON in St. Barts. He raced with Alexis on Genesis and loved it. Here you see their crew getting ready before the start of the morning's race. 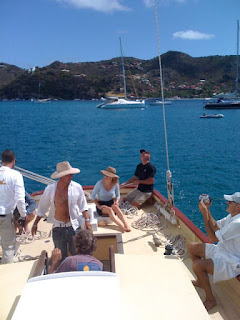 We didn't have the best start this time after being caught up in some traffic on the tight start line. Charles Hambleton on Summer Cloud killed me at the start and covered me very well up to the first mark. 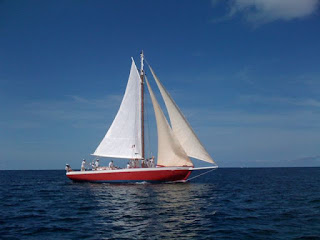 Tradition seen above with Frank Pierce shot off the line like a bullet and Alexis on Genesis was right next to him. We were in trouble and hadn't been in fourth place in a race in some time. At the first mark we just managed to pass Charles before putting our big down wind sail up. We had good winds and I was seeing speeds of up to 8.5 knots on the GPS very quickly. There was no doubt that the angle was perfect for us and we were reeling in the two boats ahead. By this time Genesis had pulled away from Tradition, but Frank was still going very well. We tried to pass upwind of her but Tradition would have none of that. Reluctantly we kept a more straight line to the island and Genesis up ahead and very slowly pass below Frank in his wind shadow. Finally we pulled out into clear air having passed Tradition and set our aim on Genesis up ahead. We were gaining on them which made all on board excited. Behind us we could see Martin Dudley on "Good Expectation" giving some good battle to Charles on "Summer Cloud" with "Alexander Hamilton" and "Plumbelly" a little further back. "Plumbelly" seen below is an amazing story in itself. The little 24 foot wooden boat was built ages ago in the Grenadines on a beach in Bequia and had sailed right around the world two times! It had also sailed across the Atlantic 26 times. The current owner, a 30 year old American guy sails normally by himself and was sailing through the Caribbean his brother at the moment after coming over from Africa. Talk about adventure!!!! The boat was tiny, but obviously designed and built very well. 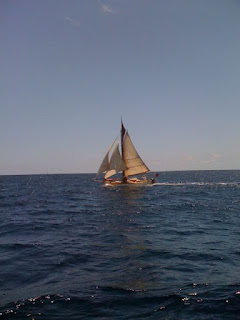 After rounding the island we had to sail upwind to Colombier, and the wind was blowing at about 12-14 knots which is ideal for Ocean Nomad. We were catching Genesis and they knew it. We could see them carefully monitoring us trying to figure what to do. I have been in that position hundreds of times during windsurfing regattas, and you are always unsure of how to stop that boat behind you. The winds up under St. Barts started to get light and shifty and Genesis decided to tack away from the land into better air outside. I think they thought that I would tack to avoid getting his bad air, but I saw that the boats anchored up on shore above us were pointing in a way that would suggest a good wind direction change for us. We ducked his stern as he had right of way and kept going up in search of the magic lift. Sure enough we got it and got it good while looking back at Genesis sailing away from us. Finally when we had drank as much of that wind shift as possible we tacked to get us closer to the finish line. We were no very much safely in the lead and waited until we couldn't miss the finish even with a big wind shift before we tacked on our way to our second win in the regatta so far. It was time for lunch and a swim!
Genesis took a mooring and we pulled alongside him so we could share our beer and food with each other. The awening was a must as it was pretty sunny and hot. You can see us starting to put it up here. 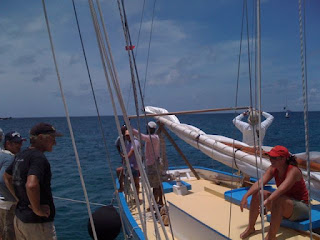 LouLou the commercial fisherman from St. Barts who was sailing with us had brought along some lovely mahi mahi steaks which we had grilling on the back of our boat in no time. With all the food and drinks we all brought along it was going to be tough to race home in the afternoon.
In fact, by the time the start line for the final race was set, both "Tradition" and "Alexander Hamilton" hadn't set their sails. I think they were more set on enjoying the wine and relaxation than racing. Summer Cloud had also opted for the delicious attraction of rosé back at the beach. That didn't mean it wasn't going to be a battle between the racers left and as you can see from these photos taken just before the start, it was tight. 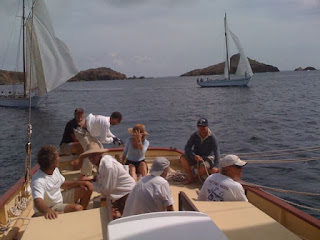 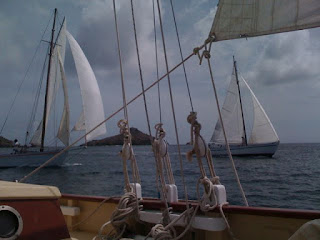 We knew that we would be able to just about use our big down wind sails but it was going to be tight. Since we started just below Genesis we waited until he had put his up before we did anything and then pushed him up in order to get above him. We then put our sail up and managed to stay in front on the way down to the island we had to round. It was close action and plenty of fun. 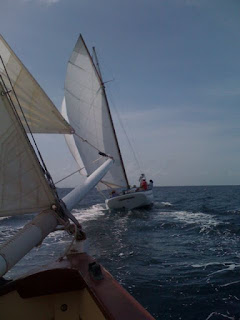 When we rounded the island Genesis got a huge lift and managed to pull alongside of us. 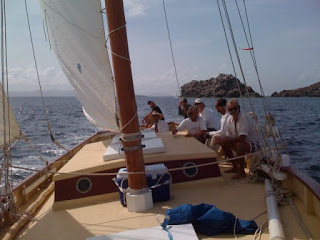 For the next few miles we sailed neck and neck until the winds picked up a bit allowing us to point slightly higher than them. 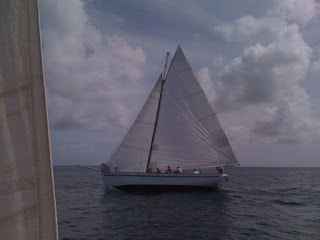 I pushed them up for a while until finally cracking off to reach towards the next island we had to round in the lee of Gustavia. From there it would be a beat up to the finish. Once again we got to the island in front of them with them right behind us. The winds died for us as we expected in the lee of the island but then when they kicked back in we were pushed off or "headed" by a huge wind shift. Only about three boat lengths behind us Genesis was in good wind and managed to get a huge lift sailing about 90 degrees higher than us. Within about 10 seconds she was a good distance above us and we would have to work to catch her. The winds had gone much lighter and far more shifty and we managed to catch them again half way up to the finish before almost getting becalmed. We decided that the north side of the course had more wind and Genesis decided to sail on the south side. Unfortunatly we picked the wrong side and had to watch Genesis find some good air while we sat almost motionless. 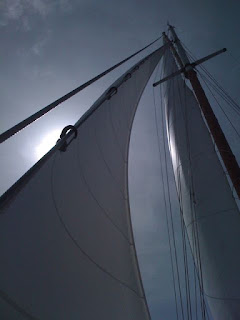 She finished ahead of us in the end which actually wasn't a bad thing. A win is a win and although she and her crew could be happy that they won the final race we could uplift this loss with the joy of the overall win. Two firsts and a second got us the trophy and what a lovely one it was. If you ever get to St. Barts make sure you look for the fantastic artist David Wegman who did our trophy. Guilli and Jason came up on stage to collect it with me and we were all very happy. The regatta was such an awesome time all in all with the most amazing hospitality from all the local people on the island who remembered these lovely sailing vessels coming into Gustavia to trade in the old days. The West Indies Regatta had now been born and was there to stay.
Posted by 365 at 11:13 am

Congratulations to Ocean Nomad and her crew!