With every single computer model from the international weather departments saying Tropical Storm Bill is going to pass far to our north we are feeling much better in Antigua once again. Tropical Storm Ana which was forecast to hit us at just under hurricane strength has now weakened to a very weak tropical storm and has continued on it's westerly track keeping it far enough south from Antigua that we won't be hit by any of the tropical storm winds and very little of it's rain. Ana is a small tropical storm and a hurricane hunter plane is supposed to be on its way into the storm to see if it is still strong enough to be called a tropical storm. Looking at the actual rainfall amounts at this hour below from the Guadeloupe Radar you can see that there simply isn't much out there. 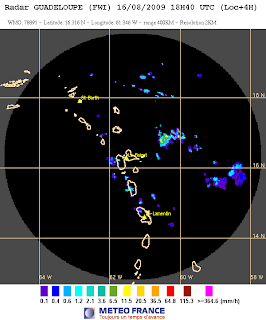 The IR satellite map below shows very little cloud cover associated with Ana either, but I think Dominica and Guadeloupe will get some squally weather later tonight and tomorrow. We here in Antigua may or may not get much at all. We will have to see. That being said you are wise to prepare for some 40 - 50 mph squalls just in case. 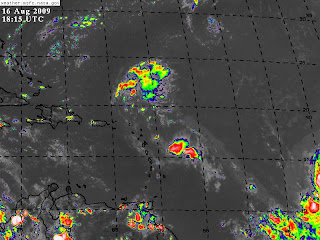 The forecast track for ana is here and for bill is here. Currently the weather is mostly sunny here in Antigua with a very light north wind. Some boaters are securing their boats and the others are out enjoying the use of them on this sunday. The rest of the week now looks fairly normal according to all forecasts but we will have to keep an eye on Bill as he's still east of us and you can never 100% trust the forecasts.
Posted by 365 at 2:43 pm