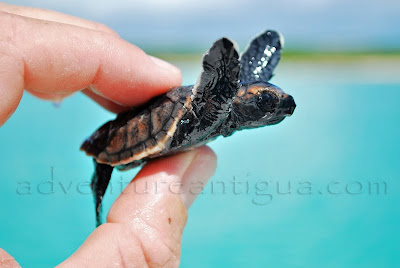 Hi there, on tuesday afternoon I joined my dad and uncle on another Barbuda adventure. This time it was a little fishing and some turtle watching. We didn't find Suzie but did save some little turtle hatchlings that had been left behind deep inside the nest. Turtle scientists usually dig out a nest the day after it hatches out to see if any little ones were left behind. This nest had four little buggers that would have surely perished. This is pretty normal i guess if only one in 10,000 eggs will produce a mature turtle in the end. We let them go to give them a second chance. Anyway, this blog isn't about our adventure over there. IT's about the EAG's plan to change the AGM once again. Their website first said October 17th and then the 24th and now TBA. They have to vote to move the AGM and the election of a new board, so they are asking people to still come to this saturday's meeting at 7pm. I will be there early.


We regret to inform you that Saturday’s AGM will have to be postponed for a few weeks. The Board felt the postponement necessary for 2 reasons:


- Nominations for new Board members have not been pouring in as we would have hoped and,

- Our auditors have recommended a bit more work on our financial systems before we present our financial picture to you and the world.

Nevertheless, we still need you there on Saturday! We will need your assistance to pass a resolution at a Special General Meeting authorising the Board to postpone the AGM until after the end of October, as we anticipate with Independence happenings taking place very soon that we are looking at mid-November at the earliest for the rescheduled AGM.

Also we want to say a special “Thank You” to our volunteers who worked so hard at the SCSCB meeting in July, and to make them some presentations. And we also have a Video to show you!

The Agenda items will include:

- A resolution to postpone our AGM , until a date we are currently deciding on with our auditors.
- A special thank you to our SCSCB volunteers.
- A special pre-view of an EAG video, produced by HAMA , on landscape degradation in the Nelson’s Dockyard National Park , which is currently under production. We look forward to your feedback on this effort.
Light refreshments will be served. We hope you'll make every effort to attend.

I think they may be a little afraid of YOU if they read your blog. Eli you have influence that they may not want to have to contend with, so good for you, I think that is great. Watch, they will schedule the meeting during the time you are getting married just to keep you away.
Donna Breen