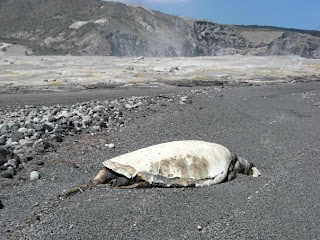 Caribbean Helicopter Pilot Greg Scott, took this photo recently as he made a stop with scientists to an area that had recently been covered by an ultra hot pyroclastic flow. The area is along the North East side of the Caribbean island of Montserrat and as they inspected the shoreline there days after the eruption, temperatures just below the surface were still above 200c. This unfortunate green turtle washed up on the shore after being killed by the massive eruption which happened on Feb 11th 2010. According to reports there was quite a wave of superheated ash in the massive pyroclastic flow that came down over the water and into the sea. Of course among many species of wildlife that would have been in the area would have been turtles like this one which feed and live in the area. On the island there were many other animals and plants that were killed this time as well. There was no human lives lost because of the evacuation ordered by government and careful work done by the scientists there. The 6 satellite photos below (click on the image for bigger version) show the huge plume of ash as it explodes from Montserrat. Photo 1 shows the start of the eruption on the 11th. Here in Antigua we were very lucky not to have had more ash particles landing on us than we received. As the sat images show, most of the ash moved east between Guadeloupe and Antigua. My boats still had a thin layer of ash all over them. What a mess!

This photo taken from 6000 feet by Greg shows the area hardest hit by this recent eruption. This was where the old abandoned airport was up up until the 11th. It is now totally covered by as and rocks. In the photo you can see new coastline that was created by the new flow as well. 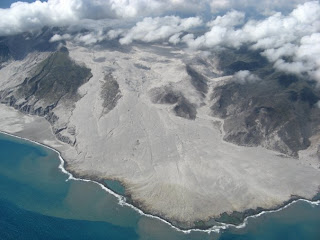 This photo was taken a day or two after the eruption and shows water boiling around the newly formed coastline. You can even see geysers spouting over the top of what was once ocean. 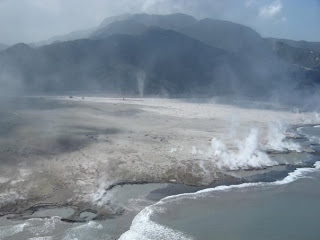 According to greg and the international scientists there, this volcano is far from being done! Caribbean Helicopters takes guests there on trips most week days.
Posted by 365 at 10:23 am

Some additional comments on the wildlife and animals that were affected by the partial collapse of the Volcano lava dome in Montserrat.
There was a "colony" of Iguanas, which may have numbered over a hundred, that lived on the rocks next to the old runway. Some of these lizards were quite large, almost four feet in length. They could be seen basking on the rocks just above the beach, and would go up into the vegetation next to the rocks to graze and browse, and then return to the rocks to bask to help digest their dinner. I'm afraid that all of them would have been killed by the hot lava rock and ash that swept over the old airport area.
As well, there was a large flock of sheep, many goats and many donkeys that frequented that area and I have seen no evidence of them since the eruption. I have seen a few donkeys that seemed trapped under a few surviving trees and their hoof prints can be seen where they have attempted to find a way to greener areas but they turn back to the trees that they are taking refuge under. I am not sure how long they will be able to survive before they can move out across what is now hot ash to greener pastures. The green areas are a long way south or north from where they are.
It is sad that these animals may suffer, and that many have already, but there is no way to get in and rescue them at this time.
Many people on my trips ask about the effect the ash will have had on coral reefs on that side and I can only surmise that the reefs have not done well. But we have to remember that this is what has been happening for thousands, if not hundreds of thousands, of years to wildlife, fish and other sea life around Montserrat every time there is volcanic activity. Hopefully the reefs will recover again, and the indigenous animals and birds will thrive again on Montserrat. This volcanic activity is how many of these islands have been formed, and many of them will go through these stages of paradise to volcanic destruction and back to paradise time and time again. Life will go on, on Montserrat and the other volcanic islands as well.

amazing, but you are totally correct. it's all quite natural.

this is beyond sad..and part of the reality of this incredible natural event...hopefully the livestock are being cared for...