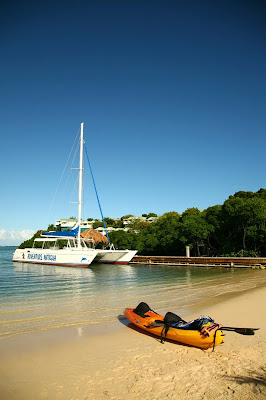 On average we do about 5 private tours or charters a month. This month we have had more than usual with childrens birthday parties as well as big birthday parites. We have taken out the skipper and crew off on one of the huge mega yachts from English Harbour and have even taken out incentive groups from Welch's Fruit company! It's been a busy one. Yesterday using the dolphin catamaran I had a very enjoyabe private charter coming from the Mill Reef Club. We have only done a small handfull of tours from there and it was nice to actually collect our group from their house right on the beach.
The tour was an eco tour kind of day where we sailed through the narrow channel near Devils Bridge and down wind towards Great Bird Island. The winds in the morning were fairly light and the sailing was slow but peaceful on the way down. Bird Island was very nice with the waters being very clear and the island not too busy. Our regular Eco Tour came up to the island while we were there and moved off to see Hells Gate before we left. Even though i have been there about a million times, I still love being out there and seeing all the cool stuff. While we were anchored up off the beach we spotted a huge spotted eagle ray, a little hawksbill turtle, red billed tropic birds as well as the magnificent frigate birds. 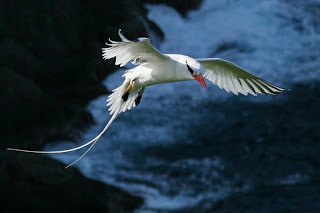 The small hike up to the top of the island was great, and it was the first time i had been to the top in ages. The view from there is probably one of the best in Antigua. The wind had come up and the birds glided happily above us along the ridge.
The sail back was a bit more choppy until we were inside the reef once again as the winds were up to about 18 knots. The kitesurfers and windsurfers up at Green Island were enjoying the wind. There must have been 25 yachts anchored up behind the reef there including Genesis, the sister to our Ocean Nomad.
Private Charters are often a less expensive way for a large group to see the islands, and one of the the only ways for a small group to be on their own. I enjoyed the trip yesterday. Thanks!
Posted by 365 at 9:50 am