Wow, I think that the past four weeks has been a terrible record for blog negligence. I have been very very busy though with work. Will blog about that next. First I gotta tell you what happened on board Xtreme on the second day of the fishing tournament.
On this day our Junior Angler decided to rest and instead we were joined by David "Choppa" Mendes, one of our old regulars, who had just arrived back from his med school on a short holiday. We all met up at the boat in Nelson's Dockyard when it was still dark and set off before most of the other crews had even arrived. Also going out at the same time was Captain Mike on the charter boat "Vitamin B", a Bertram 31.
Many boats were fishing in various different places some going very far indeed, but our plan was to generally fish in the same area we had done the day before North-East of Antigua. It's a place where we have hooked many large marlin and lost our big one the day before too.
We arrived at the fishing grounds just after we were permitted to start fishing and the spirits were very high on board. We fished towards a French FAD we had recently found in our favorite marlin area. With them putting a FAD in that area we knew there had to be action since there was plenty of it before the FAD was set. Shortly after we arrived one of the rods burst to life in the early morning sunlight with a hard marlin strike. We looked back as we started clearing the other rods quickly and saw a marlin jump right out of the water shaking its entire body trying to "spit" the hook. It was like a movie scene set in slow motion. The marlin, probably about 200 lbs in the air shaking back and forth for a second or two and before it landed back in the water the lure and hook getting tossed aside. As quick as this one attacked the line we had lost the fish again. Again, we lost this fish due to no fault of our own. The hook was fixed in the recommended position on the lure and all was done according to predominant rule of thumb. Yet the fish was gone once again. Two minutes later after we had let the lines back out we were still trying to figure out what we could have done differently and with a beautiful scream one of our starboard side rods burst to life with a marlin on the end.

This one didn't jump so we couldn't tell how big it was. I knew blue marlin often travel in pairs and wondered if this was the big wife of our last fish. Within no time Guili was hooked up in the harness and all the other lines were cleared. We were slowly following the fish and were fighting! "Xtreme hooked up and fighting", is what i called in on the radio to Fish Control. We were not near any other boats and I don't think our VHF radio is that powerful. We hadn't heard Fish Control for the weekend and so far for the morning we hadn't been able to reach any other boats on the radio. I called in again in the hope that someone would hear me and pass on the info as required in the rules. 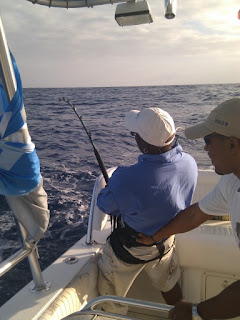 The fish took a long second run so we knew we were not on a small fish. Usually marlin under 250 lbs don't have the power to take two huge runs pulling line that has 27 lbs of drag. Guilli worked the fish and kept the pressure on the fish bringing line back in. We fish shimano 50 wides mostly filled with spectra braided line and a top shot of 80 nylon. Often we bring marlin to the boat that never managed to take all the top shot out of the reel. This one was well into the braid so we could tell there was a considerable amount of line out. Then the fish went deep. The line was straight up and down at thirty minutes into the fight and we were not gaining much on the fish at all. It was a standoff for a few minutes before the fish took another short run and the line went slack. I quickly sped up as we have seen crazy marlin do U turns before shooting up to the surface fooling us to think that they had burst the line or gotten off. Just in case I sped up to try to put pressure on the line. Slack line is the enemy, but the line remained slack and we knew this fish was no longer ours. For the third time in just over 12 hours we had lost another good fish. The mood wasn't good at all on the boat, but we all still quickly put lines back over the side. We knew there had to be more out there and it didn't take long to realize that. About thirty minutes later we hooked up once again. This time it was Garvin on the line and the marlin was a jumper. 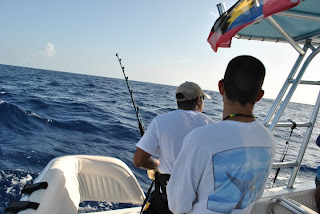 It took off a considerable length of line before we had a chance to slow it down, but we didn't want to rush anything on this try. I could tell the fish wasn't a small one by the splashes in the distance. We knew that we may have a fish that could be taken back to the scales. Within 20 minutes the fish was getting close and there was talk about killing the fish. Unfortunately this tournament is still a kill tournament with enough money being offered in prizes that you wouldn't turn your back on if given the chance. The gaff was set up and our simple measuring line was also readied. The line was set to the length that would make a blue marlin 300 lbs if placed between the tip of the lower jaw and the fork in the tail. Our line had a lure on the end and was attached to a rod. All we had to do was bring the fish close to the boat with and put the tip of the rod next to it's lower jaw and see where the lure ended up. Sounds easy huh?
Anyway, as the dark outline of the fish came into view on our port side the crew yelled and screamed that this fish was a keeper. I wasn't convinced. One of the crew told me that we didn't need the measure for this one as it was way big enough. They all reminded me that I was not a good judge of marlin size. We have caught and released many marlin but had only killed one before in a tournament. That time I was also worried that the fish wasn't big enough, and it turned out that it was 589 lbs. That was the early days of my marlin fishing and I had released many marlin since then. I wasn't convinced about this fish and told the crew that I didn't think it was big enough to make the 300lb limit, telling them that we had to measure this fish properly. We got the fish close enough to wire, but we had got it here quickly and the fish was very much alive and not wanting to be close to the boat. It would have been easy to just gaff it, but we had to measure it. As John finally was able to bring it to the side of the boat close enough to check the measurement, I put the line in the water. This photo was taken by Guilli exactly at this point. If you look very carefully up in the right side of the frame you can see the rod tip that had the measuring line in the water near the front of the fish : 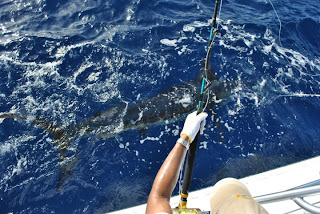 Before we could see the measurement, the fish started to go wild again and pulled free from john and going under the starboard bow. I had to reverse hard to port to clear the line and it took us another 5 minutes to get the fish close once again. It still wasn't sedate and as we put the measure alongside the fish we argued and second guessed and discussed. This was the first fish we had brought alongside today after loosing two others and a huge one the afternoon before. No marlin had been caught yet and if this one made 300 lbs we would be getting a nice big check. The fish started to struggle again and we decided to bring it on board. We gaffed it and after quite a struggle we brought it aboard.
Only then could we properly measure it and the line showed that the fish was an inch shorter than our measuring line. A dark mood set across the boat for a while as we all sat there thinking about the possibility of it being under weight. The day went on and we actually had another two strikes I think but they didn't hook up or take much line. Towards the end of the day we heard that the fishing had been very bad this year and our fish was the only marlin caught with one other boat releasing two blue marlin and a white. 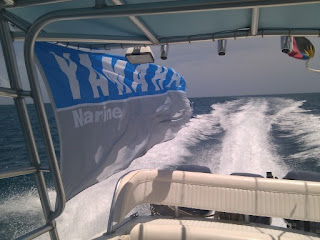 We were among the first boats back in and after dropping off the fish close to the scales we left John and Garvin there to check the process while we moved over to our mooring to start cleaning up. We really had a feeling that it was underweight even though we had all taken bets on it's size all guessing it was just over 300. Within 20 minutes we heard the bad news. It was 283 lbs and just 17 lbs short of the minimum weight.
Team Xtreme was in the dog house! Environmentally it wasn't really a huge deal. Sport fishermen in Antigua kill less than five marlin a year if not considerably less. French commercial fishermen have dozens if not hundreds of FADs in our waters stretching from North of Barbuda all the way to our economic border with Guadeloupe and each one aggregates fish including marlin that the fishermen harvest. I have spoken to many fishermen in islands from St. Barths south to Grenada and it is common for small commercial boats to catch up to three marlin in a day while fishing for tuna on FADs. I fished once on a commercial long line boat where tuna and sword fish were our target species. We had a short line (ten miles) and managed to catch five blue marlin in one night.
While everyone on Team Xtreme, and mostly the skipper, seriously regrets killing an undersized fish (which was chopped up and eaten), we know that this kind of thing happens in kill tournaments like ours. We have been asking for observers to be stationed on each boat and our tournament be changed to a no kill one. I know that this can happen and hopefully will happen because we will never kill a marlin again on purpose. I say on purpose because it's possible that even in "no kill" tournaments fish get that get hooked up are killed.
Anyway, I am considering ending our marlin fishing, but for now still think that the impact of us going fishing for marlin a few times a year is sustainable.
I think that there is enough support to make our tournament a no kill one and will let you know when this happens. All in all, we had fun out there fishing for the two days but would have had way more fun if we had been able to bring 50% of our strikes to the boat. If we had done that and released them we would have won very easily on points alone. That's why they call it fishing and not catching......
Posted by 365 at 11:04 am