Just back from a trip to see Zemi in Carriacou.

Last week I took on a quick delivery job which entailed me taking a powerboat down to the Grenadines. The boat belonged to Elite Island Resorts which has Galley Bay, St. James Club, and Verandah here in Antigua. They run a magnificent island resort in the heart of the Grenadines called Palm Island which is in fact where my wife and I spend the second half of our honeymoon last year. We had to deliver the boat to Palm, but part of the deal was that I would use the boat to deliver a few small items to our new Carriacou Sloop "Zemi". Eventually we will add this boat to our fleet.
Back in the early part of this year the new boat was launched with the usual traditions and ceremony. Here is a movie which contains a collection of images several of us took along the way as well as on launch day:

She has now had most of her ballast added, and just before we arrived there last week, she had her mast put in.
Our job while there was to get the mast properly rigged with the forestay, shrouds and running backstays. We also had to attach both jib and main halyards. Imagine trying to attach blocks and halyards to a mast that had none in it before. It's a good thing one of the builder's sons has ice running through his veins. It was a scary thing to watch as he climbed up the mast and balanced on the spreaders while attaching the blocks. Crazy. Don't ask me why they couldn't find a single shackle on windward to put on the top of the mast. That would have made it easier to get him up there safely. Anyway, by the end of a day and a half of work, we were almost ready to sail. Unfortunately we had to return to Antigua and left them trying to fit the rudder and boom. I think they will be sailing by the start of next week.
This shot taken with my phone shows Calistus up high on the mast fixing the rigging in place. 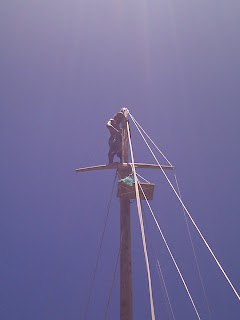 He was up there for ages as it was very hard work and not the safest. Imagine if this boat was being built in the UK where health and safety regulations are the strongest on the planet!
Anyway, the boss was his dad, and it seemed like this was something Cal had done many times. He showed no fear at all and got the job done.
Alexis Andrew's Genesis is almost in Carriacou and another Carriacou sloop will be on its way down from Antigua this weekend. They are both on their way to the Carriacou Regatta which is held over a few days starting on the 30th. We went last year and I was toying with the idea of going down to race Zemi this year, but I think I may end up missing it. That being said, the Zemi may end up sailing it's maiden voyage in the regatta if the builders get her ready in time. I will go down again some time this summer to sail her out of Carriacou.
Posted by 365 at 11:16 am