The title above is just so true. I have written many articles pointing out how exactly our nations marine eco systems are in severe decline while at the same time our government has received tens of millions in grants from Japan in a "quid pro quo" arrangement. We vote with them on any fisheries related issues at the various international conventions. Each country has one vote and ours is worth quite a sum.

This is simple politics and its the same world wide. I won't change it and will have to live with it. That being said, it is unacceptable that all of this money and support we are receiving form Japan isn't actually helping our marine eco systems in a way that will benefit future generations of fishermen or any other group.

Several days ago a large foreign flagged boat ran aground in the North East Marine Management Area (NEMMA) causing some damage to an area of shallow sea grass beds teaming with marine life. Remember, this area has been legally made into a Marine Protected Area (MPA). Our boat tours passed it early in the morning while the ship tried fruitlessly to get itself off the shallows. There was a huge cloud of silt all around the boat as its prop wash pushed and pulled the boat in the shallow waters. Here is a photo of the boat taken later on when they had stopped trying to move themselves: 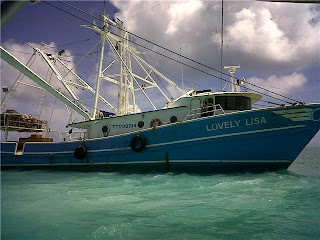 If you look above the L in "Lovely Lisa" there is a guy at the wheel house, and this gives you an idea of how big the boat is. A little further back yo can see the boat's registration number. "TT" shows that this fishing boat is from Trinidad & Tobago which doesn't actually have anything to do with the point I am trying to make, but opens up another huge can or worms which I will tackle when i get more info. Everyone involved is being very tight lipped, so I don't know why a huge TT registered commercial fishing boat was stuck on a grass flat in our waters.
Back to my point...... We called the coast guard so that some help to the situation could be afforded. They didn't seem to know about it. A call was made to the Fisheries Division who also didn't know about it. The person on the phone seemed concerned and surprised and obviously wanted to do something about it, BUT they said something like they didn't have access to transportation. Later it was alleged that the budget for fuel in the Fisheries Division had been cut to almost nothing which meant that they were essentially grounded. All those millions of dollars in Japanese aid to build fisheries buildings and not a dime permitted to be used in protection of Marine Protected Areas or anything else for that matter. What a joke. It's all politics and you have to feel for the workers in the Fisheries Department. A call was also made to the Environment Division because they always seem to have transportation in the form of cars and trucks. They said they would speak with the Coast Guard.
In the end the boat was pulled off the shallows by a tug after considerable effort and it was towed to the tug's base nearby at Crabs industrial area.
Finally the Coast Guard and Fisheries inspected the boat and the decision was made to take the boat to the Coast Guard Base. I have seen nothing in the news about this boat but as far as I am aware, no charges or considerations were made in association with the damage to NEMMA's Marine Protected Area.
Anywhere else, the boat would have been heavily fined and impounded until the fines were paid.
Here is an article taken from the Amandala by Aaron Humes. It speaks of a more serious situation that happened recently in Belize. It shows that the financial side of these accidents are something that a broke government may want to take not of!


In what Chief Justice Abdulai Conteh called one of the most “technical” cases he has ever decided in his time in the Belize Supreme Court, the Government of Belize won its claim against the owners of Dutch cargo ship Westerhaven, which plowed into Belize’s Barrier Reef on the night of January 13, 2009, allegedly because of negligence on the part of its captain, Fritz Schroeder.

The MS Westerhaven Schiffahrb GMBH& Co. KG must now pay BZ$11.5 million in damages for running over an acre of pristine coral while on its way out of Belize, headed for Santo Tomas in Guatemala. The Company was represented by Michael Young and Darrell Bradley of Youngs Law Firm, while the case for the Attorney General was argued by the mother-daughter team of Lois Young and Deanne Barrow.
Estimates of the damage were as high as BZ$52 million at one point, but when the case went to court in November the defendants conceded liability and pressed for a judgment of US$2.5 million – the amount they estimated it would cost to rebuild the reef with artificial coral. They also argued that a 1976 Convention of Limitation of Liability on Maritime Liens, to which Belize is a party, would limit the amount the C.J. could grant to the Government.
The Government on the other hand requested as much as $31 million, based on an estimate of value of some $5,000 per square meter of coral.
In the judgment, according to Barrow, the C.J. stated that the 1976 Convention does not apply to injury to coral reefs, and therefore he was unlimited in what he could award in damages.
At the same time, the C.J. thought that $11.5 million was “fair” based on a reduced measure of value, at about BZ$2,000 per square meter. (The amount of coral damaged is estimated at a little over an acre, or between 5,500 and 6,500 square meters.)
Deanne Barrow told us that on the matter of rebuilding the reef, the idea was considered “not practical” because of the state of devastation the Westerhaven left in its wake; there was quite literally “nothing to build on,” she told us.
The area damaged is located about 32 miles southeast of Belize City, and is according to Barrow located within a prime protected area for Nassau Grouper spawning.
Expecting a possible appeal, the Government is seeking to enforce the BZ$13 million bond on the ship signed last February, weeks after the grounding.
In court this morning, we are told, the Chief Justice read a poem celebrating the value and beauty of the Belize Barrier Reef, long recognized as the second-longest unbroken chain of coral reef in the world behind its more illustrious cousin in Australia, and which demands Belize’s protection.

Recently back in Feb, another yacht ran aground on a lovely reef inside the NEMMA. Huge efforts were made by nearby residents and others to get this boat moved. All the government departments kicked the problem between them like a world cup football while the boat caused more and more environmental damage. The boat is still high and dry up there off Green Island. There is aslo another ship causing environmental damage in Seatons also in the NEMMA. Nothing has been done there either. A massive fuel leak from the West Indies Oil platform happened a few months back. NADA done bout that either. There are many more similar cases. There are environmental accidents all the time here and nobody pays any attention to them. When will our leaders learn?

I called the local Coast Guard to find out more about this T&T registered fishing boat. They told me that they didn't really know why the boat was being kept and that i should speak with the Customs Department which i did next. They told me that the only reason the boat was being kept was that "it was found in an unofficial port of entry." JEEZ!!!! They were taken there by a tug boat that took several hours to get them off of a protected bit of marine eco system!!!!!!!!
Posted by 365 at 10:43 am