i've been missing in action 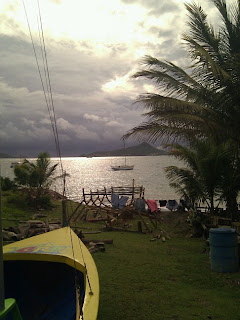 For the past week i have been once again down on the tiny island of Carriacou. We are told that "Carriacou" means island surrounded by reefs in the now extinct Arawak language. The Arawaks were one of two tribes of Indian people found in the Caribbean when the first Europeans arrived in the late fifteenth century.
Another Arawak name is Zemi which is a unique sculpture that housed the spirit(s). It was a very special piece in the Arawak village and I have found many of them here in Antigua with my dad who is the local expert on Zemis. Anyway, our new sailing vessel seen out at anchor above, which sailed for the first time recently was named Zemi by my wife. I was thinking of naming it Calalloo after the popular Caribbean dish and also the name of the hotel my grandfather built over next to Curtain Bluff. Anyway, Zemi sounded better and that was the name that she was launched under. Since her launch in the new year, she has had a mast put in, rigging set up, and sails built.
Last weekend was the Carriacou Regatta and Zemi's builders had said that they wanted to race her then. 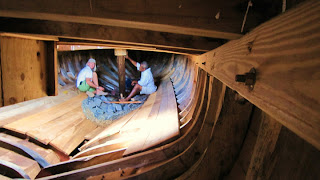 This forty two foot sloop with a massive genoa and main was going to be sailed for the first time the day before the race if all went well. Of course, as is usually the case down there, things didn't get done on a tight schedule and the first race ended up starting with us still on anchor scrubbing moss off the bottom and putting spinnaker blocks on the top of the mast. 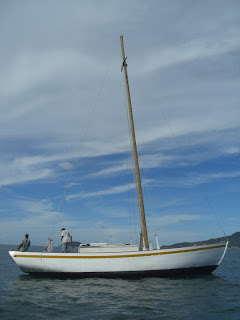 Somehow we managed to set sail and cross the line 20 minutes late. This boat is ready to sail..... sort of, because without any winches at all, it wasn't easy. We had to add extra sand bags to ballast the boat enough to race and we found out that in winds over 15 knots we simply didn't have enough down below. 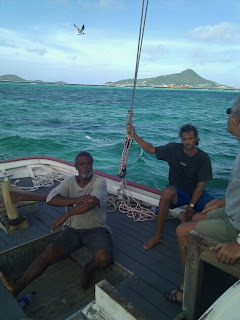 Anyway, we did fairly well an managed to improve in every race as we changed bits and pieces on the boat. 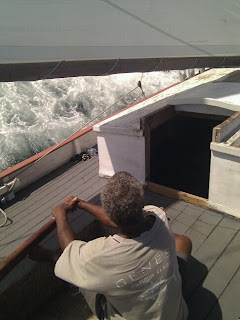 For me the regatta was the "sea trial" that every new boat needs before she can go off shore, and the plan was to sail back to Antigua after the regatta once we knew she was sea worthy. That plan also got changed when we realized that tropical storm Collin was going to be passing too close for comfort to Antigua. Without any modern navigational equipment and no engine the risk that something could go wrong in bad weather spinning off from a tropical storm was too great. We decided to slip the boat in Carriacou and get some fresh paint on her before we made the 350 mile trip up to Antigua. As it happened the storm fizzled out and we had beautiful weather in Antigua. Zemi will soon be sailing up from Carriacou to be properly painted and finished here in Antigua in a similar way to what we did with the Ocean Nomad which we use with http://www.sailingantigua.com/
Posted by 365 at 11:57 am

Hi, intersting bit about the Zemis, is there a chance you could post a few examples please Eli.
thanks - fran