A complete free for all when it comes to fishing in Antigua. 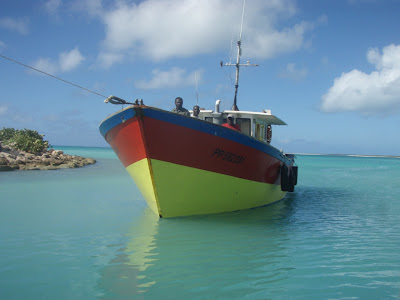 This past Sunday a Guadeloupean fishing boat was found drifting not too far from land. A locally registered fisherman came to their assistance and pulled them back to Antigua Slipway in Nelson's Dockyard. It turns out that this same boat was rescued three weeks earlier five miles east of Barbuda by ABSAR. Here is a report from their website:


ABSAR receives a call concerning a 406 EPIRB activation 5 miles east of Barbuda. ABSAR RESCUE 1 responds to the location and tows a 11m fishing vessel to safe harbour. A total of 10 hours and 103 NM were covered during this call out.

ABSAR towed them into Barbuda where repairs were done so that the fishing boat could return to Guadeloupe. The boat was not searched by the coast guard or by fisheries from what I can gather before it left Barbuda. When it was found five miles east of Barbuda they were 195 miles from the international fishing waters east of the island and some sixty miles north of the economic territorial line that stretches between Guadeloupe and Antigua. It doesn't take much to come to the conclusion that this boat was fishing in our waters.
I have not been fishing far east of Antigua or Barbuda within our economic zone without seeing Guadeloupean fishing boats for years. 100% of the time that Antiguan boats fish for tuna and Dolphin fish east of Antigua and Barbuda they either meet Guadelouplean FADs or their boats. Click here for more info on French FAD fishing for tuna and mahi mahi in our waters. See a short video of us passing one of these FADs less than 12 miles off Antigua's coast.

On the day we shot this little video we found 7 other FADs up to 25 miles East of Antigua. Fads have been found from the North side of Barbuda all the way across and east of our island to Guadeloupe.
Anyway, on Sunday when the boat arrived back in boat under tow, our Coast Guard inspected the boat and found hundreds of pounds of fresh fish on board. The ice was almost all melted. The coast guard asked the fishermen if they were fishing further than 12 miles off our coast and the fishermen said that answered that they were further than 12 miles. This was a simple but crucial mistake made by the Coast Guard who were more concerned to see if the boat was carrying drugs than if they were carrying fish. 12 miles is the territorial zone that goes around Antigua Redonda and Barbuda and is not the same as the ECONOMIC zone which unless it borders another nation is in fact 200 miles. This boat was surely not fishing 200 miles off Antigua when it broke down. Their GPS navigation system was mysteriously wiped clean so no proof about where they had been fishing could be gathered. According to someone on the scene, they did have hard copy charts on board which did have FAD coordinates marked within out economic zone.
With their ice melting and the boat needing fuel the captain was able to sell 165 lbs of fresh mahi mahi to one of the biggest fish wholesale companies here in Antigua, buy fuel filters, fuel and ice and leave the country without ever clearing in with immigration or customs, without speaking to customs about selling fish which was allegedly was caught in international waters, and without paying any taxes.
I spoke with Fisheries about this issue and they said that there was no way that they could prove that the fish had been caught in our waters and that the captain of the French boat claimed that he had been drifting for three days. This in my opinion was very weak in my opinion. I would like to see an Antiguan fishing boat try that one in French waters. Anyway, even if they were telling the truth about drifting out of international waters all the way down to the Antiguan coast, why were they permitted to sell their fish here in Antigua?
The boat left Antigua on Monday and is at this moment calling Pan-Pan out to sea adrift once again. I'd be interested to see if the Montserrat or St. Kitts coast guard and Fisheries departments are as friendly to foreign fishermen as ours are.
Two times in less than a month and this boat was only ever spotted by our authorities because they broke down. Every single day of the year boats from Guadeloupe and from St. Barts are fishing in our waters, and there is little wonder that our local fishermen refuse to call the coast guard or Fisheries to complain. Why should they waste their time?
While Antigua's fishermen fish inshore for meager pickings the Guadeloupean's are taking huge catches while fishing our waters. This all seems to smell less of fish and more of poor government planning and incompetence and one more time where this blog points missed financial opportunities for our Government.
Posted by 365 at 1:43 pm