The Sargasso Sea is an area in the Northern Atlantic Ocean in between the important Ocean currents as seen in the old map below. 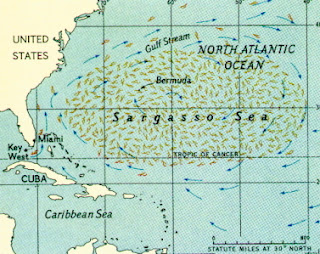 I explained these currents in detail in one of my most popular blogs on flotsam and jetsam. You can see that one by clicking here.  Read more about the weed here in this link and here in this interesting website. This very important sea of floating weed supports a massive habitat and at this time of the year the little turtle hatchlings are usually swimming out into the currents to try to find protection and food within the weeds. What is usually something that helps the turtles is now something that is hurting them. We had months of unusual south currents and many of us who were fishing in May and June complained about these currents. It seems as though they hit the Sargasso Sea at a strange angle possibly pushing some of the weed away from what is normally a current free area within the north Atlantic gyre. Its as if - in a swirl - masses of sargassum broke off and probably went north and east into the currents which now have brought the weeds back across from Africa into the Caribbean. People from Tobago to Hispaniola are complaining about masses of weeds. This photo below taken by a friend shows what is normally a nice little windward bay on the Eastern side of Antigua. As you can see, the dock is now surrounded by sargassum. 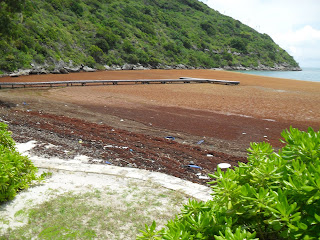 Here in another photo you can see a bay not too far from the one above. This is an areal shot taken by "bugpilot": 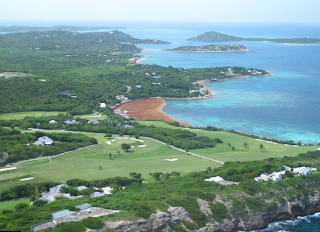 Here is photo taken from way above which shows two massive clumps of the weed just east of the islands. I estimate these two patches to be about the size of a football field. There would be so many fish, crabs, shrimp and birds feeding below. It would all come to an end as it washes up on a beach though. 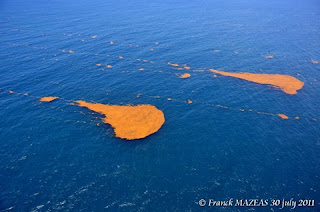 That wouldn't be the only problem either. As the weeds block out the sunlight on that bay above, many other life forms may perish. And then there is the decay. This is like nothing we have seen in my lifetime and it seems that there is still more weed floating across.
It's important to understand that this only effects the windward beaches of any of these islands.

EDIT Friday 12th. Here is more info that points to the direction that it's coming from and suggesting that we are to see more of it. Click here.

A week ago, I saw massive amounts off Shirley's Heights but to be honest I thought it was an oil slick from passing freighters.

Thanks for this. I have been wondering were all the weed has been coming from. The East coast of Grenada has been experiencing this for weeks now.Have seen great clumps drifting in to shore and the beaches and bays on the Atlantic side are as in your photographs.
Cheers Richard.

Thanks Eli, for your explanation! Here on St. Maarten, we have seen these weeds come in our bay for weeks now. I wondered where this came from as I have never seen it like this before! Looking at the ocean here on the east coast while I type this, I see many many patches of seaweed drifting this way..... Thanks again, best, Carolien

The governments, plus NGO's of the Caribbean must act now to investigate the catastrophic invasion of sea weeds. It should be treated as a regional emergency. While it may be taken lightly, the impact to both tourism and marine industry and its resources can be quite significant. already,persons who depends on the sea for livelihoods are complaining. when our waters are threatened our lives are likewise threatened. All efforts must be made to determine if there are toxic deposits and pathogens and uncommon marine life that may have drifted with it. To me, it's as serious as an oil-spill. Let's prevent bad spendings of millions of EC dollars later; when it might be too late for the Caribbean region to recover. I can't imagine loosing a beautiful beach like Grand-Anse in Grenada, to Sargassum. this is an appeal to the relevant authorities, please look into this event with all your might!

Thanks for the full information onn this blog. It is a problem on Virgin Gorda, British Virgin Islands and I agree...it can be a very dangerous siwtuation as we dont know what the after effects are. Here in Virgin Gorda..the smell is quite noxious..but nary a word from the environmentalists

Hi Eli and others on the blog. I first saw the brilliant yellow weeds while diving with the sperm whales way back in early February. At the time there was a brisk current and breeze coming FROM the south. As a result, I made the assumption that they were coming from the south. I have also watched it off the south coast of Dominica where i have an excellent view from my house. They are, at least at this stage, heading north.

On another note, it has been a bonanza for the fisherman here who are catching more mai mai (dolphin fish) than can be remembered. Although the mai mai are young the fisheries storage can accept no more due to space limitations.
Andrew Armour - Whale Whisperer

Thanks Andrew, yes the currents coming in from the south at the time were crazy strong and very unusual.
We have been catching some good dolphin fish too. I am grilling some tonight that we caught on tuesday. Thanks for stopping by. Hope the sperm whales are well. Say hi from us!