Killing sharks and eating their meat is more dangerous than swimming with them. 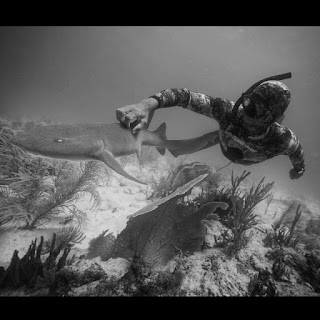 Recently the Daily Observer newspaper YET AGAIN published a photo of a large dead mother tiger shark. This one had just been landed in Jolly Harbour by some local fishers. I can't remember exactly but the caption was something like "this wonderful delicacy will be eaten by many lucky residents." Each year sharks come inshore to give birth to their live babies. The puppy sharks as many call them spend their early years close to shore where they are able to hide from predators and feed on other small marine creatures. This has been going on for millions of years before the first indigenous people travelled here from south America. Their numbers now are dwindling thanks to mankind. Shark conservation is extremely important and something taken seriously in many places around the world..just this week a video of people saving a stranded great white shark in the USA went viral.
I am writing this on behalf of the Antigua Conservation Society (ACS) in the hope that the Antigua Observer will stop printing such unfortunate pieces which ultimately cause damage to a species which is under pressure from over fishing and habitat change. What is even more important than that is the ACS hopes to educate The Observer Media Group and the people of Antigua and Barbuda on the very serious dangers of eating sharks and other large marine predators.
The Food and Drug Administration (FDA) in the USA has done extensive studies on shark meat and strongly advise the following people to avoid consuming it.
The reason for this food warning is mercury and methylmercury which are toxic to humans. According to the Environmental Protection Agency: "Mercury occurs naturally in the environment and can also be released into the air through industrial pollution. Mercury falls from the air and can accumulate in streams and oceans and is turned into methylmercury in the water. It is this type of mercury that can be harmful to your unborn baby and young child. Fish absorb the methylmercury as they feed in these waters and so it builds up in them. It builds up more in some types of fish and shellfish than others, depending on what the fish eat, which is why the levels vary. Nearly all fish and shellfish contain traces of methylmercury. However, larger fish that have lived longer have the highest levels of methylmercury because they've had more time to accumulate it. These large fish (swordfish, shark, king mackerel and tilefish) pose the greatest risk. Other types of fish and shellfish may be eaten in the amounts recommended by FDA and EPA."

Methylmercury causes central nervous system and spinal cord damage in humans. Symptoms of this damage can be:

The Antigua Conservation Society is very concerned with calling tiger shark meat a delicacy. Do more research. Even healthy adults are advised to eat small portions of shark meat once or twice a week at the most.
As I mentioned, tiger sharks face many pressures. According to Wikipedia: "The tiger shark is captured and killed for its fins, flesh, and liver. It is caught regularly in target and nontarget fisheries. Several populations have declined where they have been heavily fished. Continued demand for fins may result in further declines in the future. Tiger sharks are considered a near threatened species due to excessive finning and fishing by humans according to International Union for Conservation of Nature.[2]
While shark fin has very few nutrients, shark liver has a high concentration of vitamin A which is used in the production of vitamin oils. In addition, the tiger shark is captured and killed for its distinct skin, as well as by big-game fishers.[5]
In 2010, Greenpeace International added the tiger shark to its seafood red list, which is a list of fish commonly sold around the world, and which have a very high risk of being sourced from unsustainable fisheries."
Many Antiguans like watching whale wars on TV. What they don't know is that the Sea Shepherd gang have faught even harder for shark protection. To find out why click this quote from their website:
"Sharks keep our largest and most important ecosystem healthy. Our existence, in part, is dependent upon theirs. Sharks have sat atop the oceans’ food chain, keeping our seas healthy for 450 million years. They are a critical component in an ecosystem that provides 1/3 of our world with food, produces more oxygen than all the rainforests combined, removes half of the atmosphere’s manmade carbon dioxide (greenhouse gas), and controls our planet’s temperature and weather."

The Antigua Conservation Society thinks that the brave fishers that catch sharks should be encouraged to target other sustainably caught species that provide good safe protein for the people of Antigua and Barbuda.

EXCELLANT ARTICLE ELI … thanks for pointing this out.. it made my blood boil to see that PHOTO you mention and I am happy to see you tell it like it is here.. I hope people take heed.