Fish Aggregating Devices in Antigua and Barbuda - a can of worms.

Since 2006/7 I have been fishing on and writing about Fish Aggregating Devices or FADs here in Antigua. What is a FAD? If "fish aggregating device" doesn't explain it well enough, then just imagine a FAD as an artificial reef anchored out or in some instances floating in deep water where a massive food chain is attracted artificially for the purpose of exploitation. I suppose "exploitation" isn't a nice word for some and they would rather hear something else like FADs attract fish so that fishers can catch more fish. That too! 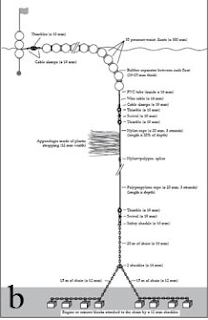 Anyway, at the end of the day a FAD aggregates fish which means it brings together fish that would have normally been spread out across a larger section of open ocean. FAD fishing in our exclusive economic zone (EEZ) has been primarlily done by fishers from the islands of Guadeloupe, La Désirade and from Saint-Barthélemy (St. Barts). In the French islands they call them DCPs. Do a youtube search for "Pêche sur DCP" and have a look at some of the vids. Some of them could very well be in our warters!
We don't know how many of their FADs are in our waters or how many fishers from these islands fish in our exclusive economic zone (EEZ) each week. Suffice to say that the very small number of our local fishers who fish offshore see many foreign FADs and their fishermen each week. Click here for an old blog post about illegal FAD fishing. In many cases the foreign fishers attempt to chase our local fishers away from these FADs. I wrote about that here back in 2011 when it happened to me. I know many local fishers who have been threatened. Some have had their equipment destroyed by these foreign fishers. I remember a boat called MiniBite reported that during an Antigua Sport Fishing Event a Guadeloupe boat deliberately ran over their lines cutting all. This past weekend a friend called Stevie was threatened by foreign fishers when he approached one of their FADs just 20 miles from shore. Fishing on FADs when you know what you are doing, gives you a better chance of catching certain fish like several species of tuna, marlin, mahi mahi, rainbow runner and even wahoo. Conservative estimates suggest that there are hundreds of thousands of pounds of these species being caught by foreign fishers within our EEZ each year. It very well may be over a million pounds a year depending on which local commercial fisher you speak with. I am convinced it's over a million pounds of fish a year. In those islands where fish sells for more than it does here, the dollar amount is probably close to twenty million EC dollars a year. And that number is probably growing while the amount of the same species being caught in the traditional fishing grounds by long time local fishers diminishes every year. After speaking with some of the French fishers about their FADs in our waters they argue that they are permitted to fish where they are because the waters are not Antigua and Barbuda "Territorial Waters". They are correct that most of their FADs are not within our Territorial Waters but they are wrong thinking that they are legal to fish there because they seem not to understand what the Exclusive Economic Zone is. For a good definition of all these things click on this link (especially if you are a fisherman from one of our neighboring islands).
Most commercial fishers blame FADs for the decline in stocks on the "edge" (continental drop off) and offshore banks (sea mounts) saying that historical migratory routes are being changed by all the offshore FADs which are being set as close as 5 miles off our shelf and as far as 70 miles off shore. Of course, FADs may be being set further but our local fishers are not venturing that far off yet. Recently I visited a FAD anchored in 15,000 feet of water. The amount of rope needed for that would probably be three times that!

This Video shows a bit more about Western Pacific Fads and one organization's controversial goal of banning FADs globally. Without thinking much about it I can agree with a ban on net fishing around FADs as clearly it's a bad idea.

The implications of turning our backs on a problem that exists are very serious for the people of Antigua and Barbuda. We need to be able to feed ourselves in the future. Food security is essential and while history repeats itself over and over the lessons are often ignored. This problem of illegal FAd fishing has decimated fish stocks of many underfunded and under organized third world nations. I have always felt that Japanese aid is horrifically immoral and this latest funding for FADs continues on their policy of throwing money at us without caring about our long term sustainability. They should be using their free cash gifts to fund studies which would help us understand our fisheries strengths, opportunities, weaknesses and threats. It is abundantly clear that they don't care and the sad part is that despite this being clear, we take the money that ultimately hurts us.

Since writing the section above, i have spoken with the Fisheries officer who's in charge of FAD construction and deployment here in Antigua and Barbuda.
I think he was unaware of some of the concerns that many commercial fishers have with FAD fishing. He says that the Japanese funding for FADs is a regional thing and that the reason he only decided to use a small number of fishers with the initial FAD program was that he felt it would be better to get the program started with a smaller group than with a larger one. I pointed out that the process of deciding who to invite clearly was unusual. Some of the fishers were not even nationalized! He agreed with my sentiment that a more inclusive approach was needed and that policy needed to be directed by a larger group than the small group of commercial fishers currently involved in the FAD program. In certain areas FAD fishing is heavily regulated to ensure food security and sustainable fishing. Take for example Hawaii where I am informed that the only FADs that are permitted are government set FADs. There are a finite number of FADs set and these FADs are carefully monitored. Any other FADs set are deemed illegal. A growing number of places don't permit FAD fishing at certain times of the year and some don't permit FAD fishing at all. These nations recognize the danger of FADs if fished without proper management. We here don't have the capability or interest in controlling FAD fishing which has been going on here mostly illegally for a decade already.
The government of Antigua and Barbuda spends very little of its budget on their Fisheries division, and seems to let the small department get steered or influenced by Japanese policy in many respects. The status quo seems to be centered more on catching more, rather than on the often touted concept of "sustainable use". Japan spends millions of dollars on Antigua and Barbuda fisheries so that they get their whaling/fisheries vote sorted out but none of that seems to be spent on figuring out how to fish sustainably. Antigua and Barbuda's fishers on the whole, are poor people who could be doing much better if the resources they targeted were managed more sensibly or in a sustainable manner. Policy and planning are crucial and I think Japan will ultimately benefit from their manipulation of our Government's Fisheries body. Very little proper study is done to see what species can and should be targeted and very little is spent on educating local fishers on sustainable practices. This FAD situation needs to be looked at, not just by Japanese influenced Government technicians or a small self serving group of fishers but by people and groups looking out for the country of Antigua and Barbuda and it's future.
Posted by 365 at 10:47 am

This along with the situation that the CRFM has no idea how healthy the pelagic stock are as there is no reporting on catch from fishers or fishery officers to record.

So perhaps we have a collapse of this resources in ......