French fishermen threaten us while we fished in our own waters.

Before I explain what happened yesterday I want to point the readers attention to several blogs I have written about the ongoing problem of French commercial fishing in our waters. Specifically on FADs. I have been speaking and writing about this for years and Antigua's deep sea fishermen have been complaining to the authorities for considerably longer.
Click here and click here for info on the problem of St. Barts and Guadeloupe's commercial fishing industry in our waters (includes video and photos).

Recently during an Antigua Sport Fishing Association tournament we met some commercial fishermen from St. Barts who owned FADS that we had found 12 miles off Barbuda's north coast. They explained to us that they were not doing anything illegal because they were permitted to fish in "International Waters" and that their DCP's, as they call FADs, were anchored 12 miles off. Their argument rested on what is known all around the world as Territorial vs. International Waters. Here is a very good definition of Territorial Waters and I think the problem is that the French Government is not telling their commerical fishermen the difference between Territorial Zones and Exclusive Economic Zones. It seems as though commercial fishermen from St. Barts and Guadeloupe either don't know about Exclusive Economic Zones or know that our Government doesn't care if they fish illegally in our waters. Here is a good definition of the Exclusive Economic Zone. Remember the zone is calculated around Antigua Barbuda and Redonda going out 200 miles unless it borders with another country's EEZ. This very crude drawing below done by me gives a very very very rough estimate of what our Exclusive Economic Zone could look like. 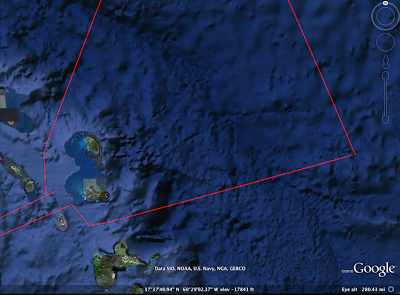 (edit: I just found an actual map of Antigua and Barbuda's EEZ which is very close to my guestimate: Click Here)
I am sure that our Fisheries Department has a proper map but generally this area which starts along the triangular borders of Antigua Barbuda and Redonda is quite unique in its size. We are blessed to have so much of it but we are permitting the French to use it for the betterment of their economy while ours declines.
Anyway, yesterday we went looking for tuna twenty five miles East North East of Antigua and found a French FAD. There are many up there and you just have to either look for big flocks of birds or find small French fishing boats and you will then find FADS. We found a FAD in our waters and started fishing. Shortly afterwards we spotted a boat on the horizon coming in from the North East (deeper into our Economic Zone). The boat was about 34 feet long and had twin 300hp Suzuki engines and two fishermen on board. The PP registration numbers told of a Guadeloupe registration. In a very threatening maneuver it raced full speed towards us as if on a collision course. We had our engines off and had three lines in the water and had to scramble to start engines and move just as the other boat slowed just feet from our windward port side. We believe they intended to run over our lines thinking we were fishing using a similar method that they use. We were not and our lines were not cut. Anyway, they started yelling and screaming at us. I maneuvered my boat so that I could better defend myself if need be and tried to explain that they were fishing illegally in our waters and that I was calling the coast guard. Of course, our VHF radio couldn't make contact with Antigua's coast guard probably because of the distance from shore. They kept on yelling and screaming at us out in the open ocean 25 miles from land where there was no one to witness what would happen if things got physical. One of our crew reminded us that many of these commercial guys carry guns and that guns are even more easy to find in GP than they are here in Antigua. We had one crew who understood some French and explained that they were saying that they were much further than 12 miles off Antigua and well within their rights to fish in these waters.
In the end I decided that this wasn't my battle to win or lose on this day and we retreated to another location taking these images as we left. 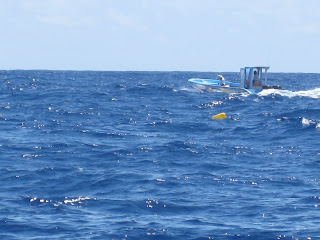 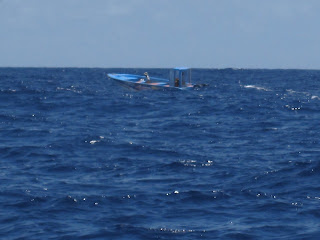 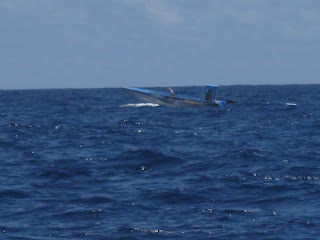 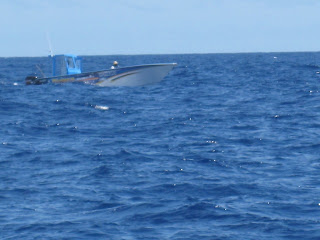 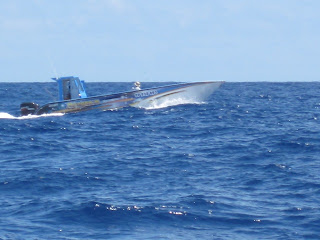 On the way to another fishing ground we spotted another even smaller Guadeloupean fishing boat drifting in the distance some 8 miles further east. We knew he would be fishing on a FAD and marked a course to intercept. As he spotted us coming he quickly moved away hoping we would not find his FAD. It was too late and we went over to it saving the GPS numbers to fish it at another time when they were not around. They didn't bother us as we didn't stop. We didn't want another fight out there at sea, so took some photos and moved on. 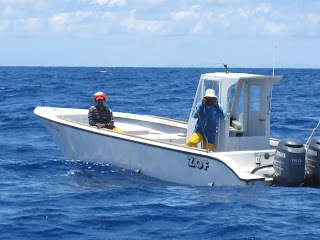 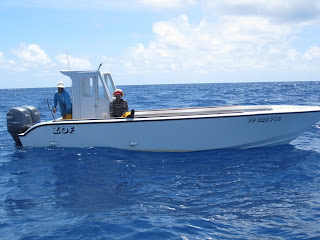 We continued another three miles to the north and found another FAD which we had seen a few months before. We fished there for a few hours and then passed the other two FADs on the way in. We spotted one other boat in the afternoon which to me was clearly was a different one than the other two.
By the end of the day we had caught over 300 lbs of fish using rods only. 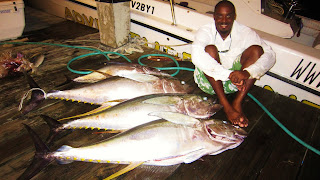 On the way back to Antigua we saw Antiguan boats of similar sizes. One which was bigger than any of the French boats was pulling fish traps not too far east of Bird Island. Another not too far away was "hand lining" for snapper and hinds in about 150 feet of water, and the third boat was setting a huge gill net just off bird island at an area where most of the excursion boats snorkel during the day.
We here in Antigua have got to wake up. We need some politicians with guts and the gumption to do something about Antigua's fishery. We are sucking our reef fish dry and letting foreign fishermen do the same to our off shore fishery. By the time our local fishermen figure out that they can make more money out to sea using the same boats they are using now, it will be fished out by Guadeloupean and St. Barts fishermen. I think if two or three of these boats are confiscated out there and their crews thrown in the slammer, the free for all mentality will change. One of these days an Antiguan boat is going to be sunk out there and we will never know what happened to it. When that happens I think the blood will be on the hands of the Antigua and Barbuda government who has been told about all of this and does nothing at all about it.

wow. get stills get video. it and your story
will get every antiguan riled up, and shame those in charge.

Eli, get a sat phone mate.... One day it may save your ass and then go find a friend at the coast guard and report these guys. Get it on record so if anything like that happens and they actually do hurt someone then there is a history of it. File a complaint and have the guys with you as witnesses. Hate to hear stories like that. Aloha Royce.

your story makes me angry...the coastguard should fix their boats and do their job !!! or they should leave you a couple of M16 for your Extreme-Fishing Tours...

totally agree with above.. record and report - and keep doing it till someone in power listens.. meantime keep blogging and using the Observer and Caribarena whenever possible to get your point across. the more people hear your stories, the more they may realise that it is not just your life at stake.. lobby the Govt to make an official complaint to fisheries in Guadeloupe.. and what about French Govt internet sites?

Boss - aim between the eyes. That will stop them damned French people from fishing our waters. As citizens of ANU and Barbuda, it's our duty to protect and defend our waters and its sea life within. If it takes something like the Sea Shepherd organization to do so, then so be it. Start getting volunteers to start it off and use whatever you capture to fund the operation.