Thousands of people have been trying to figure out why this weed is coming ashore and where it's coming from. New evidence spotted on Thursday here in Antigua provides the smoking gun scientists have been looking for.

As mentioned in my Sargasso blog from a few weeks ago (click here), huge amounts of Sargasso weed have been coming ashore from one end of the Caribbean to the other. My sister in law, Tanya Clovis-Howie, who runs the SOS turtle project in Tobago was quoted in a recent article about the unusual sargasso situation here: “It is common for a pile of it to wash up once a year for a relatively short period, but we have never in recent memory had so much of it for so long and seen such huge mats or lines of it from the air.”
Here in Antigua we have no historical mention of the weed coming ashore in these quantities either. Of course it could have happened before but we can't find any evidence of this sort of thing ever happening. As mentioned in the blog, Sargassum supports a massive eco system of wild life both under the water and above, and we have seen many of these species out on the water and along the windward coasts as the weed comes ashore. While out snorkeling recently, our Eco Tour spotted Sea Horses and the Sargasso Fish among other interesting things. One of the many species found in the Sargasso Sea's sargassum is the European Eel. The scientific name of this eel is Anguilla Anguilla and for hundreds of years Europeans tried to figure out where the eels reproduced. Aristotle was the first scientist who studied them making the incorrect hypothesis that they originated from the soil. You see, only adult species of the eel were observed in their fresh water habitats within the rivers of Europe, and it wasn't until 1922 when a Danish professor found tiny eel larvae in the Sargasso Sea off Bermuda. For more on the history of this eel check this wiki. And for a more recent study on the amazing life cycle of these eels click here to view a BBC report.
Ever since sargasso weed started coming ashore this summer scientists have been trying to find this eel so that they could figure out where this weed was coming from. Aparently this eel doesn't live in the sargassum that is found in the Gulf of Mexico or in the sargassum that is found off the North East coast of Brazil. Anguilla Anguilla is only found in the Sargasso Sea north of the Caribbean and East of Bermuda. On thursday a friend of mine observed quite a few of these eels being captured by birds as they slithered through a fresh batch of sargassum that had drifted into Mamora Bay. 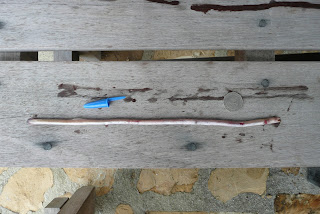 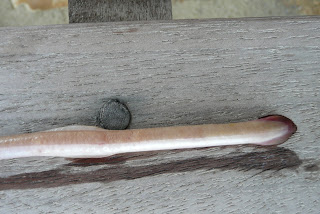 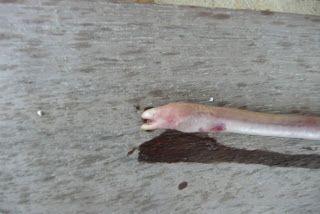 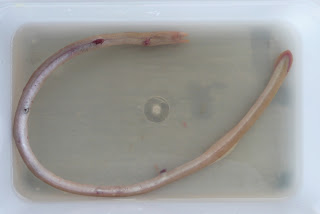 This was the "smoking gun" and many think proves where the weed originates. The Sargasso Sea is such an important and large eco system and we have no idea what all of this means for it. In fact, one of the many groups of marine animals that we worry about is turtles. We have had reports of young turtles being washed ashore within the weed too. Of course we know that after turtle hatchlings make it to the sea, they try to get into currents which will help to steer them North towards the Sargasso Sea which is where they live for a few years. This photo was taken by my friends Perri and Mark Nyquist way out to sea off Florida: 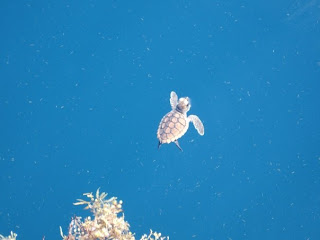 It sounds like instead of spending two years feeding and hiding in the Sargasso Sea, many are finding themselves off course back here in the Caribbean. We have no real clue about what all of this means for this habitat and all the life cycles that it supports.
I recently was lucky enough to speak with David Freestone who is one of the world's most famous environmental lawyers and now chairman of the Sargasso Sea Alliance. His organization is trying to get international support for the creation of The Sargassso Sea as Marine Protected Area. This is easier said than done as the area floats in the open ocean without "belonging" to any particular country.  Read more about the Alliance here. Mr. Freestone was here on holiday taking time off from his duties at the Alliance!! The irony is just amazing! Anyway, he felt as did many of the experts that this weed was originating from Brazil but said that if we found the European Eel then we would know for sure that the weed was from the Sargasso Sea. In a recent paper by Jim Gower, Erika Young and Stephanie King of Institute of Ocean Sciences (IOS) Canada, very good evidence was given suggesting that all of this weed originated off Brazil. Some of this evidence came in the form of various satellite images, but they did mention that they couldn't definitively prove it was from Brazil. I am interested to hear what they all say now that we have photos of the Anguilla Anguilla.

Whatever happens, the story is a dynamic one and this historical event is still developing. It will be some time before we know what it all means and why it happened. I am sure however, as i mentioned in my last blog on the issue, that what triggered the event we are now seeing here was the strange south currents we saw in May and June. What caused them is another story!
EDIT: Reports just relayed from the Sargasso Sea Alliance show massive amounts of weed floating up on the (West African) Sierra Leone coast too. This seems to be something totally usual too and people are also scratching their heads there too. Here is a photo that I received today: 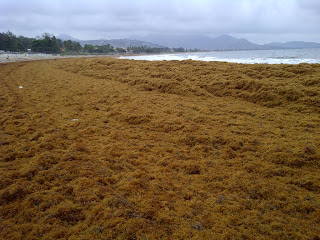 As a side note, the beautiful St. James Club resort made the terribly saddening decision to close the hotel for a month on the same day the eel was found. It wasn't because of the eel but because of the smell of the rotting weed. Hydrogen Sulphide is released when the weed rots in the water and the smell is terrible. Just by chance Hurricane Irene was passing Antigua before it became a hurricane and caused a change in wind direction. This made what was normally the protected harbour of Mamora Bay a on shore deposit spot for a massive amount of weed. These dramatic photos taken by my friend Max Freeling during the passage of Irene show what we are speaking about: 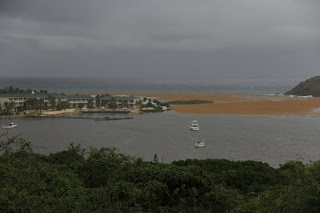 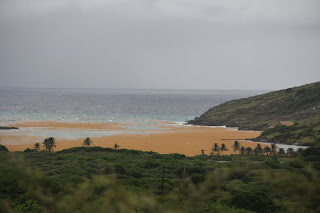 Max then took these photos a few days later: 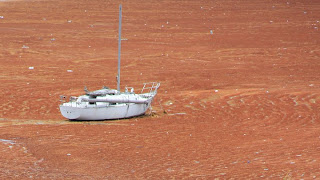 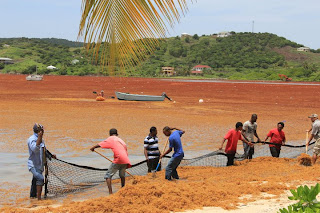 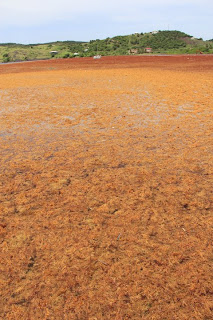 As you can see, this was nothing like any of us had seen before or could possibly prepare for. There was no warning and while it seems as though the weed arrivals are slowing down, the hotel will remain closed for a month while it is all cleared up and the smell goes away. All other resorts on Antigua seem to have been spared and it's business as usual. In fact, guests from St. James Club are being sent to Verandah Resort and Spa and Galley Bay which are other Elite Island Resorts.

Thanks for the great insight into this amazing phenomenon Eli

Wow that's unreal! I thought it was a boat sitting on sand! That's a lot of seaweed. So is there an ongoing effort to figure out why so much of this plant has died in the sargasso sea.

well there is plenty of study going on but the weed only dies when it washes up to the shore. It's alive when it's in open ocean, but usually sits between the Atlantic currents east of Bermuda.

What will become of the St James staff if the hotel closes for a month. For a majority of those people the hotel provides the only form of income for them and their families!

this morning, on turrtle-watch on Aruba, I saw, for the first time, this sargasso sea weed. In all my 29 years here I never saw this before...at least....not so much. But compared with your situation...ours is nothing.

Thanks for the information. Good reporting!

It's come to Belize. I put a link from my blog to yours...very interesting stuff. Is it better there?