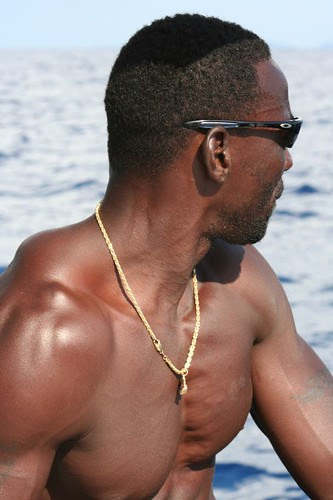 When i first got out of college i came back to Antigua to work for my mother who had a very successful leather company. LAND leather was and still is an amazing product and working for my mom told me that i couldn't be in retail. It was hard work and just not my cup of tea. After all, being away from the water couldn't work anyway.
I applied for a job with the biggest disco that Antigua had ever seen, when my mom got back from a holiday, thinking that i would have my days free to be on the water. This disco, The Ribbit Night Club, could take about 1100 people on a Saturday night. It had been run badly and its image was not that great. I was hired to try to make it safer and to try to attract a different and more mature clientele.
The first thing i did was to hire some no messing around security guards. Leslie was one of them. At the time he wasn't so big and filled with muscles, but i had heard he could hold his own with the worst of them if you know what i mean.
People would not mess with Leslie. He had a great way of speaking to people and helping them quickly understand that misbehaving wasn't a great idea. I lasted about 8 months there before the lack of sleep caught up with me. I remained friends with Leslie and when he found out that i had started Adventure Antigua, he wanted to help out. He had a pretty good job for a while there and when i finally got a second boat, XTREME, i was able to persuade him to come over. I wasn't sure how he would be on the boat but immediately i saw that his outgoing personality and extreme love of the sea would be a great asset. I think that many of the people who knew him found it hard to believe that he was now working on a "tour boat", but he was great. I have had soooooooo many emails from guests saying how well they were looked after. It seems like most of these emails came from older people and people with young kids. Anyone who needs a little more help seems to be the person that les is immediately gravitated towards. He is as strong as an ox and looks it. However he is soo calm and gentle. I tell people that he is stronger than he looks and he has proved this by winning many "strong man" competitions in Antigua. He also was in the Antigua and Barbuda defense force, and received much training by the US in Puerto Rico and Grenada. Like most of the crew, Leslie loves snorkeling and mixes his time between the Eco and Xtreme tours. You know when he first started working, he was not that great of a snorkeler, but he loved it so much than he now is one of the best around. Say hi to Leslie when you see him, but please don't ask him to show you his muscles. It goes to his head immediately. haha!
Posted by 365 at 6:30 pm 2 comments: