Back to turtles and fun stuff 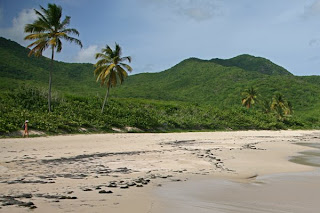 Of course when i started writing this blog I never thought I would be writing about issues other than sun sea and sand fun stuff, and the recent disaster at Cocos Hotel really has messed me up. I know that sounds silly, but I can tell you that my emotions have been all over the place. I guess i am not alone and most people i speak with here are borderline obsessed with the whole ordeal. This has shaken Antigua, and I hope with the arrest and charging of the two youth yesterday we may start to feel a bit better.
On sunday we went to check on a few turtle nests at Rendezvous Bay. According to the books these nests were due to hatch out last week, so we wanted to make sure that all was well there. This photo was taken on the road a few years ago after some rains. 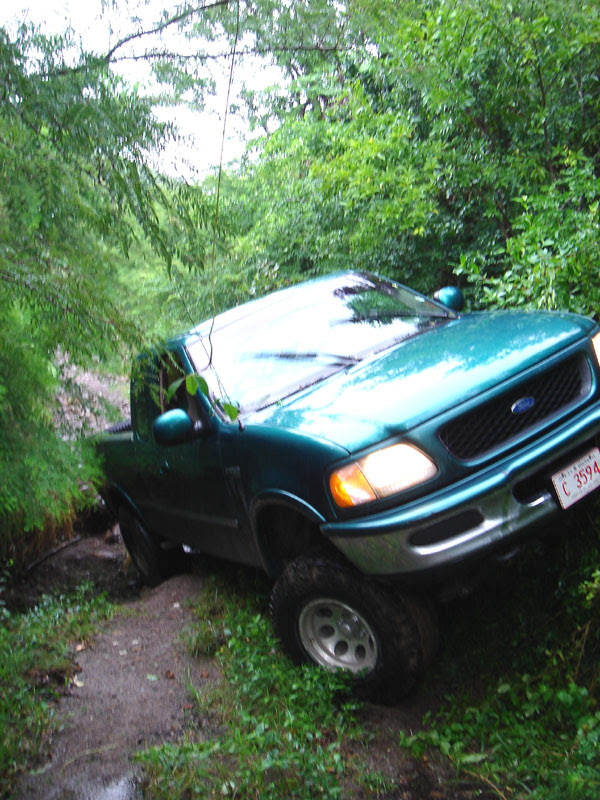 The road down to Rendezvous was terrible and worse than it has been for a while which was strange as there had been very little rain lately. Anyway, by the time we got to the beach we were feeling all shook up. Don't attempt it unless you don't care too much about your jeep/truck or if you have back or neck problems. This is the worst ride in Antigua for sure. There were some other people just leaving as we arrived and within minutes we had the beach to ourselves.
We walked down to where I had seen a turtle track some 65 days ago when I made a stop while running the Xtreme Tour. Our boats report nestings whenever we spot tracks. Sure enough the tell tale signs of a hatching were evident at the spot. 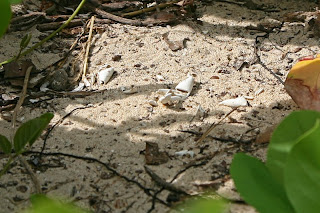 High up inside the sea grape vegetation we saw tiny broken shells which had been brought up from beneath the sand as the little hawksbill turtles scrambled out. I guess scrambled isn't the best word when talking about turtle eggs and nests, but these little guys made it all the way into the water. We dug up the nest to make sure that all had gotten out and it looked as if all were successful. Good news. What usually happens is after about 60 days of being cooped up inside little ping pong ball eggs a foot below the surface they know its time to get out. I would too. Anyway, inside those little eggs the little turtles feel the temperature drop and by instinct know its time to get out. The temp dropping indicates that it's night time and the right time for them to head to the water. You see, somehow this thing works so that they do it under the cover of darkness so as to avoid getting spotted by birds. Anyway, they wait until all the rest of their siblings have broken free of the little soft shells and they start digging for the surface. 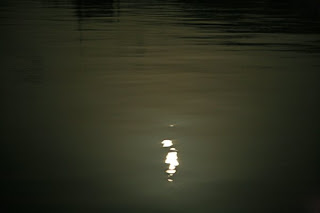 Once they come out of the nest they look for the brightest thing around and start moving towards it. Again, by instinct they know they need to move to the brightest thing which on a natural beach is always the water. On a beach with a hotel this isn't the case and many little buggers get killed by heading towards the bright shiny dining room or bar. Bright lights on beaches kill little turtles every year all over the world. 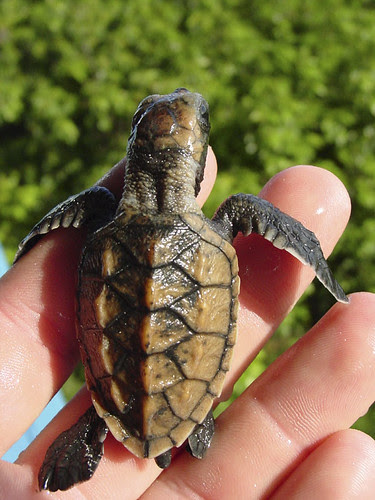 This beach I guess is an endangered species too then as it is one of few that still is dark at night leaving the glistening water with all the natural reflections form the night's sky for the little turtles to follow. Once they finally make it to the water they swim for about two weeks non stop trying to get far into the Atlantic currents. I guess we can talk about what happens next for the little guys on another blog.
Back to the beach. Many times big momma hawksbill turtles like to lay their eggs under the cover of natural beach vegetation, which is why i get so upset when hotels and others clear or ''beautify'' beaches that this vegetation. Why? Well one of the best reasons for having vegetation on a beach going up to the high water mark is that it helps to stop beach erosion during high winds, unusual waves or heavy rains. If you want the sand to stay on a beach leave the natural plant life! Another important thing is that it provides shelter to an interesting beach habitat. Due to studies carried out here in Antigua by the University of Georgia, scientists found out that turtles nesting in shaded areas produce a higher percentage of male turtle offspring. I always thought it was the other way around, but no i was wrong. Higher temperatures mean more females. Cooler more shady areas more females. There are so many things making it tough for female turtles out there that it's no wonder that they are endangered. One big reason is that they are more likely to be killed than the males who never come ashore and of course since they are the ones laying eggs we need plenty of them to help the species survive.
We found 8 hatched nests along the beach which was fairly good for this time of year. Last year several nest were damaged after huge waves unearthed them. This season is looking much better so far. fingers crossed.
As a side note. I just was emailed this by a friend.
Another excellent source of info on our island's turtles is the EAG Turtle Blog.
Posted by 365 at 9:09 am 1 comment: