Go learn how to windsurf 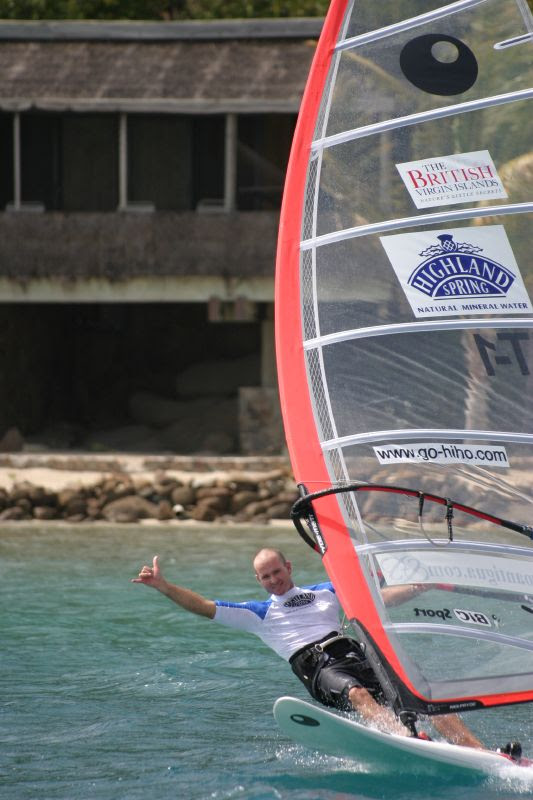 Much of my identity is associated with windsurfing so i will always have a soft spot for the sport. I think you should give it a try when u are here. Like i said in yesterday's post, i learned when i was 12 years old back in the old days when windsurfing was one of the fastest growing sports on the planet. IT was hot back then, but that wasn't the reason i got hooked. I think the thing that got me hooked was the fact that i was told that i wouldn't be any good at it. That got me determined to learn, and once i got started i realized how pure a sport it was for a person like me. All by yourself you can go out into the natural environment speeding with the wind and waves being your fuel. It’s a way to be independent and yet it can be a very social sport. I leaned very quickly back then as i lived just up the hill from Windsurfing Antigua which got started the same year. Before i turned 13 i was invited to join Windsurfing Antigua Week 1985 which was a windsurfing regatta sailing around Antigua. One of the big races was a huge marathon from Jolly Beach all the way across to the island of Montserrat. There was a practice race the day before and i did well and was encouraged to do the island crossing. Anyway, the next day after we got started the winds died down and we slowly made our way across the 31 miles of open ocean towards the "emerald isle". There were about 20 of is racing and probably about 6 or 7 chase boats hanging with us. I wanted to quit a few times but decided that i had to make it, and was delighted to reach the hot dark volcanic beach four hours after i started. From that day onwards i raced in every competition that i could join across the Caribbean. When i was 16 i was chosen to be the alternate representative in windsurfing for Antigua at the Korean Olympics . I ended up doing better than Inigo Ross (who later co founded Wadadli Cats) during the training and in the end replaced him and was sent over to race in Korea. It was as amazing an experience as you can imagine for a 16 year old island boy. Anyway for the next twelve years i raced all over the world eventually joining the Professional Windsurfing Associations World Tour. The sport really took me far and wide and helped me develop into the person that i am. It’s a difficult sport to learn on your own which is what i did back in 1984, but today with the excellent lessons and more modern gear it isn't that difficult. The rush from gliding along the water with winds in your sails that you can feel and tame....well it is totally addictive. There is no age that is too old or too young in my opinion. I have seen all ages out there enjoying the wind and the waves. Windsurfing Antigua is now mobile and is teaching most days except Mondays on jabbawock beach. That's on the north side about 3 miles from the airport, and Patrick Scales is doing the teaching there.

He will have you "bending your knees and feeling the breeze" in no time. Keep this number 461 WIND (9463) or mobile 773 9463 and give him a call when u are next here. I think his email is windsurfingantigua@hotmail.com. Anyway at the least go check it out because Jabbawock is such a beautiful beach, and the kite school is there as well. I will talk about the kite school sometime soon. The top shot is of me in my last race a couple of years ago in the BVI. The other pic is of the windsurfing school and was taken by Mark the photo guy. He's great!
Posted by 365 at 10:42 pm 1 comment: