Sailing to Barbuda for the weekend. 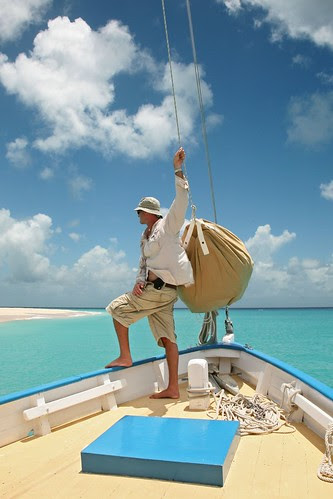 As has been the family tradition for years and years, a bunch of us went over to enjoy the Carnival holiday weekend in Barbuda. Instead of doing the powerboat thing this year, I sailed over with my girlfriend. We left a bit late and got into Barbuda long after dark. On the sail across the sounds of the wind and waves sounded pleasantly familiar. It had been some time since i had enjoyed listening to wake come off the side of a boat like this. Funny the things that one can take great pleasure from. The winds were not too strong but we still managed to keep the speed at around 6.5 knots towing the tender. Using GPS we got as far as we could go on the west coast tucked in close next to the shore and just inside some reef. The stars were amazing and even though it seemed to be a bit hazy the show above us was as lovely as ever. Since it was so late I just managed a quick pasta before falling asleep up in the foreword bunk. The gentle rocking and sounds of water against the wooden hull sent me into a deep sleep very quickly.
I was up early and was surprised to see that directly in front of the boat there had been three turtle crawls and probably nests. 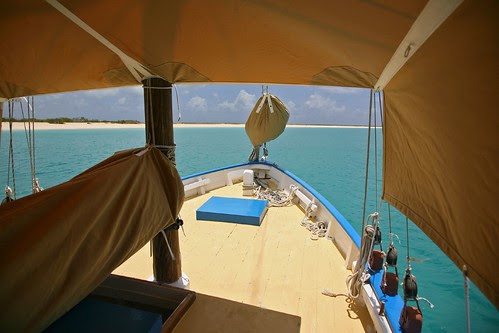 This is peak nesting season for the hawksbill turtles and the fresh tracks were not just in front of our boat. My Dad had counted over 80 tracks on the 14 mile beach along the coast a few days earlier. I hope this many nests will help them steer clear of extinction which is a very real possibility for the sea turtles. 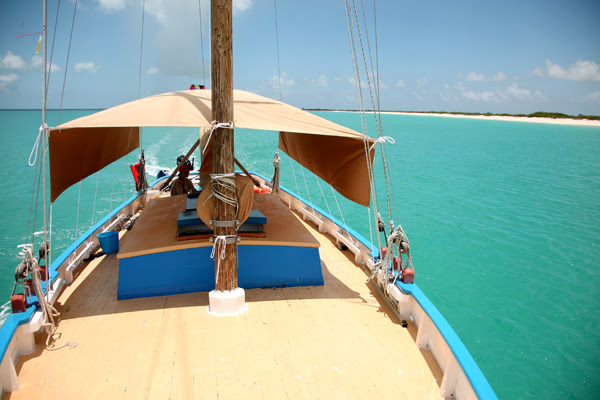 After some breakfast i put up the awnings and decided motor south to Palmetto Point where the Beach House hotel sits derelict in some sort of bankruptcy. 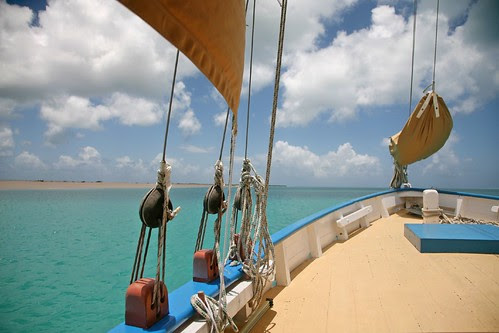 The point is such a beautiful area and the views are just as good as they get on this coast. While on the way there I let out a line and managed to get hooked into a big barracuda. 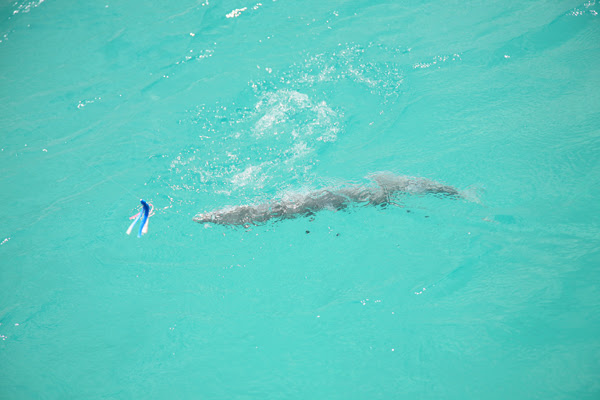 My girlfriend fought it for some time to get it close enough for me to handle it and release the fish. 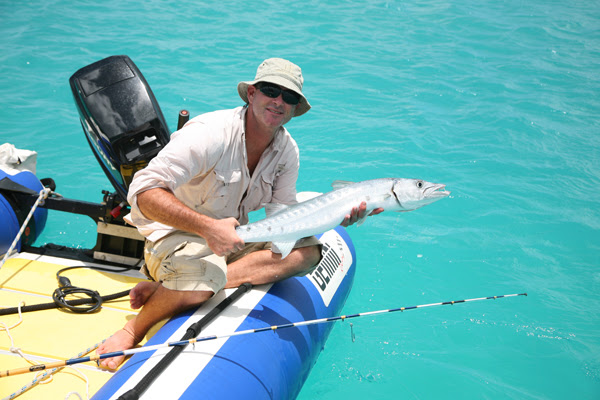 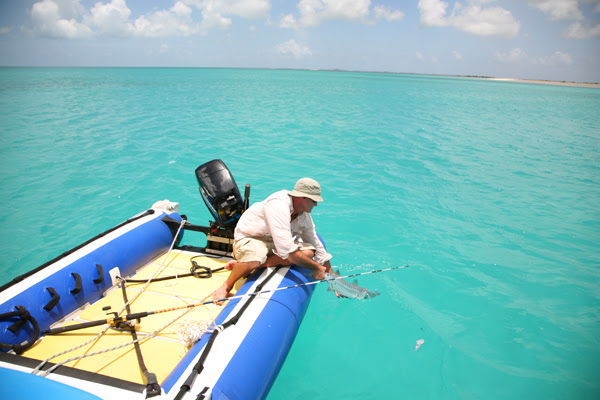 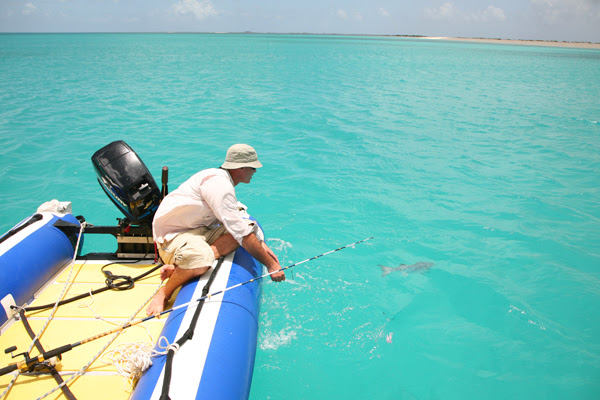 She said it was her first proper fish ever which surprised me. Hard core environmentalists don't do too much fishing i guess:) Too bad for them. hehe
From here we turned East moving into more choppy water as we cruised up past Coco Point miles up the coast, then through the reef and into Spanish Point where the water colours always amaze me. We dropped the hook in between two sets of powerboats which were rafted up inside the reef. One set was my Uncle Nick and a few of his friends and the other set was some family friends from Guadeloupe. I think Francis, the head of that group had been to high school with my Dad and uncles for a term during high school and occasionally comes to Antigua for fishing tournaments.
Uncle Nick and a few others came over to check out the boat and say hi. He said he liked how Ocean Nomad looked and spoke about getting a sailing vessel too. Afterwards we took the tender to the shore and went on a walk over the point and towards the East Coast. One of my favorite things to do in Barbuda is walking on the windward side collecting shells and interesting bits and pieces. It was late in the afternoon and we would only walk to Griffin Point which is where one of hundreds of ships were wrecked along the dangerous windward side of Barbuda. HMS Griffin hit the reef like many other boats during the colonial period and sank with all its cannons and ballast just off the shore. I found this after quite a bit of googling. Seems as though there was a more recent HMS Griffin.
"James Soaper : A Midshipman, on board HMS Griffin 1761, a 6th rate ship or frigate of 28 guns, she was lost shortly after 9 p.m., in the dark, on October 27, 1761. The ship had left Bermuda weeks earlier, had been on the high seas far away from land and, at the time she was lost on the reefs on the northeast coast of Barbuda, the captain believed (based on his reckoning)that he was more than 25 leagues off that island. "Morning : when closer to Barbuda than believed by its reckoning, Cpn. Taylor spots two suspect sails which he takes to be French privateers and starts chase. The chase goes until the night when two lights appear supposed to be the ones of the supposed French privateers. These are followed until the ship runs on the rocks, on northeastern point of Barbuda. Attempts are made to anchor, the cables part, the ship runs on the rocks and is evacuated. The captain remains alone apparently on his disintegrating ship until 4 pm on October 28. Nothing can be saved from the wreck. 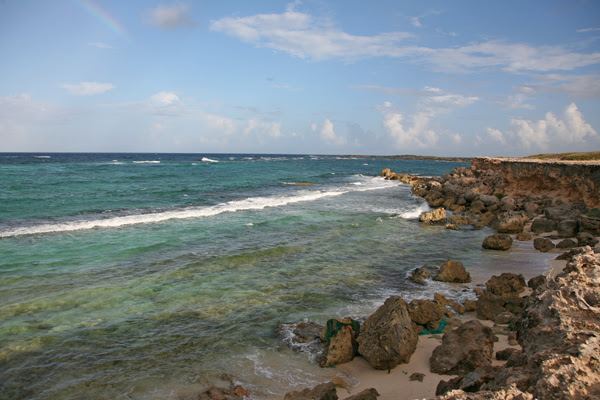 Three able seamen, William Cribb, Samuel Bond and Francis Amandis, have been drowned in the shipwreck"." From this site.
The point is such a lovely place as it's very close to the breakers and barrier reef which stretches all along the windward shore. 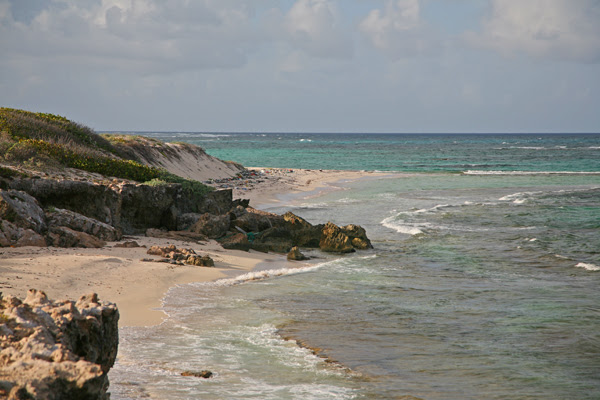 You can easily see how people could get killed in the waters there though. I have snorkeled there on the wreck several times and the currents and waves remind you of the danger constantly.
We were not snorkeling here today though as we didn't have much more time in the day. I spotted a large fishing float that had just washed up and thought that maybe i could make it into a sink for the yacht. It was pretty heavy but i knew it would be used back in Antigua. That night back on the boat we grilled up a lovely dinner and watched the stars including several of the shooting kind. It's such a nice thing to be in the Caribbean in a corner where there are no artificial lights spoiling the night's sky.
We had friends in town back in Antigua who would be leaving the island in two days, so we would set sail the next morning back to Jolly Harbour. We woke up to very light winds and knew that we would be motor sailing some of the way. In fact, by the time I had put everything away and pulled the anchor the winds were hovering somewhere around 5 knots. It was going to be a hot one. Thankfully we have a good engine on the Carriacou sloop and our slack sails were helped by some diesel power. We had a few good strikes on the fishing rod but nothing got hooked this time. The winds picked up as we got closer to Antigua and I managed to turn the engine off for a while. We were in port back in Jolly Harbour at about 6 PM and I was already missing Barbuda.
Posted by 365 at 8:14 am No comments: