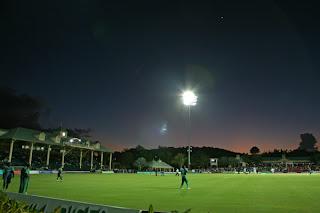 Wow, what a fantastic weekend of cricket! First Trinidad struggled to beat Barbados on Friday in what was a very close match. Then on Saturday Jamaica and Guyana was an incredibly important clash with massive numbers of both country folk living here in Antigua. Tony, originally from Guyana, watched the match hoping that his Country would pass on to the final again this time. IT was the closest battle you can imagine with it all coming down to the final ball thrown. 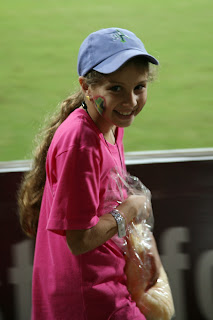 If the Guyana batsman had hit a boundary then it would have all be over and the Jamaicans would have been beaten again. 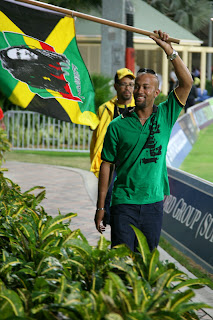 It wasn’t to be and the Jamaican fans went crazy. 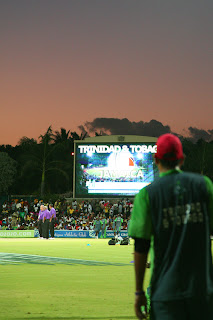 Their celebrations were short lived though because the blistering bowling of the Trinidad and Tobago team last night in the final changed their mood very quickly. Jamaica’s run rate was kept extremely low and it wasn’t long before all wickets were taken in dramatic style. When one of the Jamaican wickets were taken by Dave Mohammed, who ended up being man of the match, he pulled off his shoe and used it as if a telephone as his team mates ran around behind him celebrating like mad. When asked what he was doing…he said that there was a call for the wicket he was trying to answer. 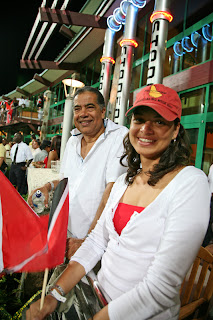 It was loads of fun for the huge number of Trinidad and Tobago fans who had flown in for the final. 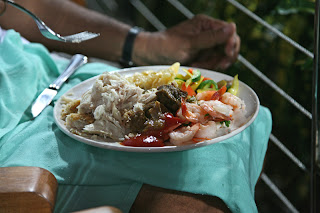 Food at the Sticky Wicket was exceptional and we enjoyed our front row seats. Not bad for less than US $50 per person. 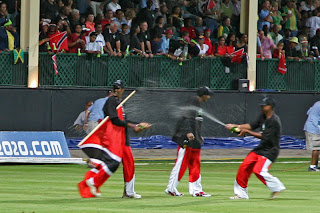 Afterwards when the checks totaling over US $1.5 million were handed out, the fireworks began. I used to like fireworks but I think after seeing hours of Stanford fireworks over the past few years I think I have lost interest. 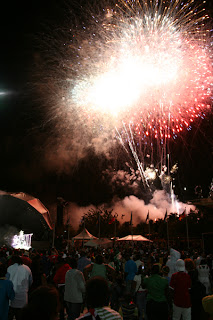 In fact, I hope he never uses them again. Mr. Stanford if you are listening…why not do something more original next time. 45 minutes of continuous fireworks every time you have an event is so 2006, and the environmental impact must be terrible. Why not parachute a bunch of people in, or have Cirque du Soleil come and perform or something else. You have soooo overdone fireworks. My poor dogs don’t like them either. Ok, apart from that the variety of entertainers was great and I am sure that the entire crowd had a wonderful time. 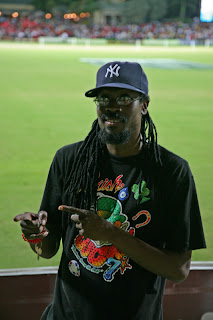 Despite many people being very against some of Stanford’s business practices and environmental impacts, its hard not to be impressed and excited about what the Stanford 20 20 has done for West Indian cricket. I wish him and the rest of the region all the luck and success in their effort to bring the region’s game back to the top of international cricket.
Posted by 365 at 11:29 am 2 comments: