Boat in Antigua for sale

Back in the autumn of 2006 I made a decision to get a replacement engine for Xtreme just in case we had problems. I looked around and couldn't find one that didn't cost the earth. I knew that using Xtreme to go fishing with a few friends just cost too much to realistically do it often. Even going snorkeling on Adventure Antigua days off was expensive with Xtreme so after searching and searching I found a boat that had two of the same engines that were on Xtreme. The boat was old and the engines were new. Together they were not that expensive and I thought that buying the boat would be a great idea. It was smaller and would burn far less fuel with just the two engines and if Xtreme had a problem we could just pull the one giving problem off and replace it with one from the smaller boat while the engine was fixed.
I made a trip up to Florida to check the boat out and paid a deposit. The boat arrived in my control in December and I wrote about it back then here. After a few runs fate sailed into town in the form of an engine problem on Xtreme. Back in January of 2007 the smaller boat became an organ donor as Xtreme's faulty engine was taken into the shop. I was told by the mechanic that they would quickly fix the engine, put it back on the Xtreme, and give the smaller back its engine too. Since then Xtreme has gotten that engine back two times and each time it broke down almost immediately. So since January 2007 I have been waiting for the mechanic who has on of Xtreme's engines to fix it and return it to me. In the meantime, the boat i had planned on going fishing with and also fixing up with the idea of doing inexpensive private charters has sat disabled.
I have finally come to the conclusion that that boat will never have two working engines for any consistent length of time and I'd be better off selling it and getting something even smaller that will run on one engine for those calm fishing days. So if you know of anyone who wants a fast sports fishing boat with all the fishing rod holders you could ever want with a nice trailer and no engines.... i have that boat for sale. Here is a pic of the boat for sale here in Antigua. Click on the link here for a bigger image of the ad. 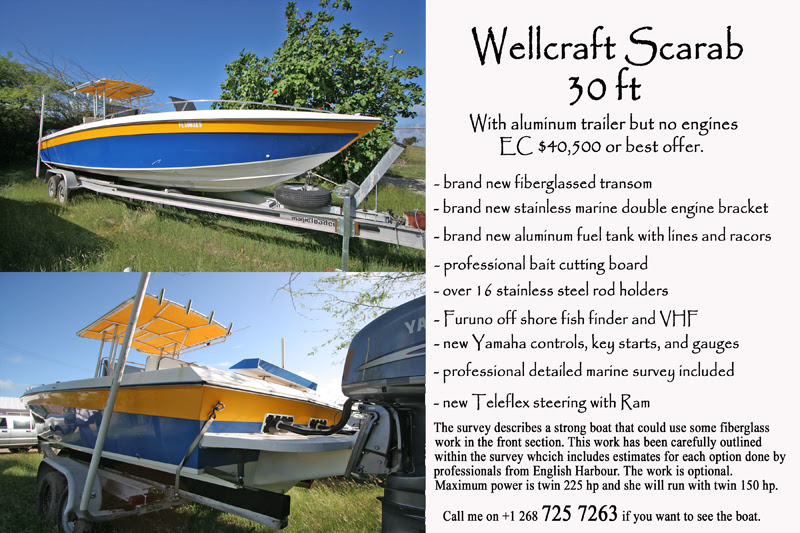