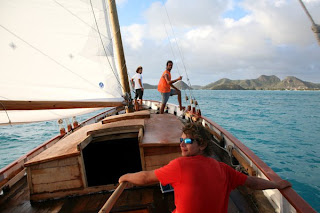 After arriving in Antigua with a boat that wouldn't dare to call itself "finished" we had to get her somewhat presentable for a special party at Antigua Yacht Club the night before Antigua Classic Yacht Regatta started. The special event was in aid of the launching of the two volume book "Carriacou Sloops" which detailed 10 years of photography focusing on the traditional boat building in and around the Grenadine island of Carriacou. World renowned photographer Alexis Andrews had helped me every step of the way to get us to Antigua with our own Carriacou sloop and I wanted to be one of the eight or nine other boats on the dock for the party. It was a book signing cocktail party with a slide show. What made it even more special was the fact that Alwyn Enoe and two of his sons would be there. These amazing boat builders were the guys building our two boats and trying to get us finished to be at the party and more importantly to them, to be at the race. Alwyns sons are some of the only young men building boats traditionally on Carriacou, an island that sustained itself on boat building for hundreds of years. 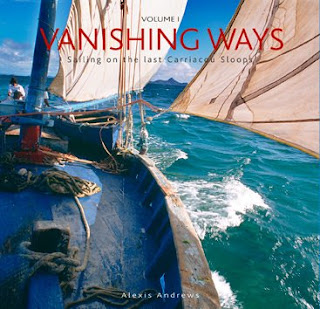 The day after we arrived in from our 300+ mile trip we were on the boat cleaning, sanding, and painting. More metal work had to be done at A1 Marine so that we could use the gaff rig racing sails in the regatta, and Carl Mitchell and his boys rushed to have us finished in time. What looked like a Haitian refugee boat the day before was starting to look beautiful. I think my sister Fran took this photo in between coats of paint. 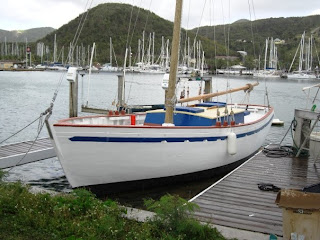 Stevie and Olly would be amazed when they saw her at the party. Wan Lovv, and Alwyn's sons painted until dark the first day as we had to be at Antigua Yacht Club by 5 PM the next afternoon. The next day it was much of the same.... painting, painting, painting. In fact when my dad and big John pulled Ocean Nomad out of Jolly Harbour and began towing her quickly up towards Falmouth, the paint wasn't even dry. I had a few frantic calls from Alexis and his gang trying to gauge if we'd be there on time. We arrived at minutes to 5 just in time for the party. Just like i figured, people were blown away with how beautiful Ocean Nomad was starting to look and even though paint wasn't dry properly and she still had another month of work to be done before charters could start, she sat there proud to be one of the Carriacou Sloops.....the newest one and soon to be the newest yacht in the Antigua Classic Yacht Regatta. I know that sounds funny: New and Classic, but as long as boats look like it and are built traditionally they can enter. In fact, the fleet during the regatta is broken down into different classes and ours was called "Traditional Class". 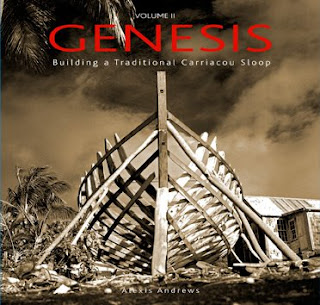 For all those interested in photography, wooden boats, the Caribbean and its traditions you should get the book. Go to http://www.indiancreekbooks.com/ and fire Alexis off an email. The books are beautiful as are the photos of the beautiful yachts inside. I tried not to celebrate too much as we had only one day left to get the yacht race ready. The next day we added some lead for ballast down below, fixed more blocks (pulleys) to the top of the mast and on deck, fixed up the gaff boom, put on the winches, and laced up the sails. We had our work cut out for us as usual and didn't have time to take her for a sail before the skippers briefing at the end of the day. I guess we would find out how well she performed in the race the next morning.
WWW.SAILING-ANTIGUA.COM
Posted by 365 at 9:41 am No comments: