41 years of fishing tournaments in Antigua 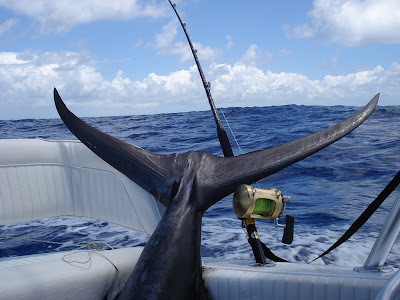 OK so I bashed the hell out of the 40th Antigua Sailing Week and now all kinds of people have taken it the wrong way and are upset with me. AS IF I AM THE ONLY ONE FEELING THIS WAY!!!!!!! Anyhows, I am gonna keep on a bloggin’

Today let’s talk about an event that has been going on even longer than Antigua Sailing Week which has never gotten as big but still manages to keep going and going. This year will be the 41st time The Antigua Sport Fishing Association is holding their annual big fishing tournament. 41 years!!!! 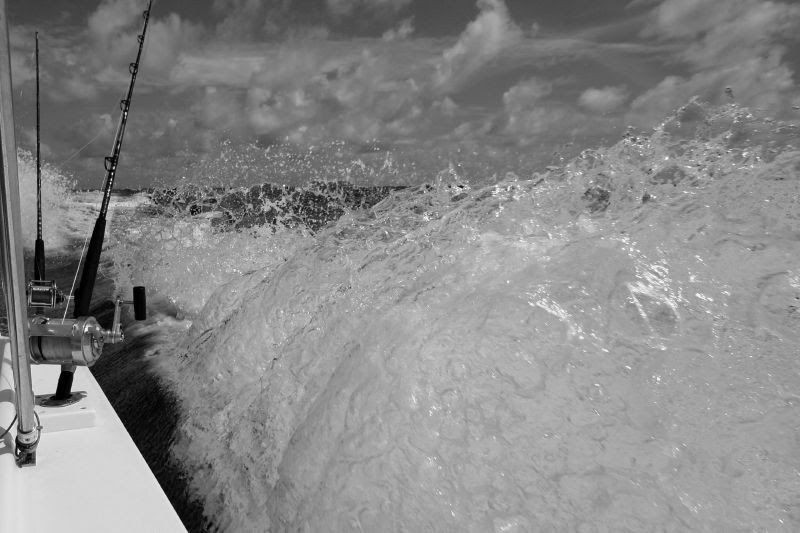 Not bad when u consider that unlike sailing week this even has always been a small association event. There are few comparisons to make but as many criticisms as there are for sailing week. The purpose of this blog isn’t to rant about it though as I don’t feel the same problems exist or even come close to those of ASW. 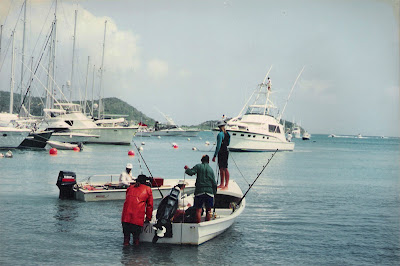 The pic above is of my boat coming in to the weigh in station after a days fishing many many years ago. I think I have competed in about 6 or 7 of them while skippering boats ranging from a 23 foot open pirogue style boat seen above to my 52 foot power catamaran where i am releasing a blue marlin below. 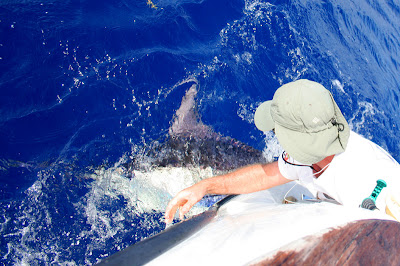 The fun seems always to be the same and I haven’t lost the excitement that the fishing tournament brings along with it. The first time registered a boat for the event the organizers thought that my boat was a little too small and after the winds picked up to 25 knots on the morning of the first day…I had to agree with them, and looking at the pic now i shake my head. 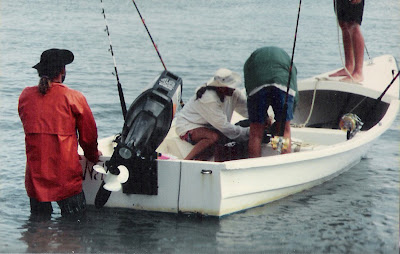 We were soaked from start to finish and beaten around quite a bit too. I think I was 18 years old and my crew including my brother Ali and former co-worker Adam felt quite a bit older after it was all finished up. We caught some good fish and ended up with several prizes. In fact, we have been quite lucky in almost all the tournaments that we have entered and the last few years we have done extremely well. Xtreme was the boat we were on last year and after catching the biggest marling seen in these waters in years the week before, we were being taken seriously. My crew including Big John and Tony had been out with me several weekends in a row before training for the tournament which sounded funny to many, but at the end of the weekend being prepared helped considerably. You see, we fish primarily for the massive Blue Marlin in this tournament hoping along with many other crews to be the first boat in Antigua to catch the elusive GRANDER. A grander is a Marlin over 1000 lbs and although they have been seen and hooked here, no boat has ever been able to bring one back to the scales. UNTIL NOW!!!!!
Xtreme is out to change those stats this year. Tony has been in the gym for 3 months preparing himself for a fight that could last 4 hours or longer. When he got his 590 lb one last year he didn’t skip a beat with that beast fighting him and trying to break him and his line for over two hours. As you can see here it was a pretty good size. I am 6'3'' to give you an idea of the length of the marlin. 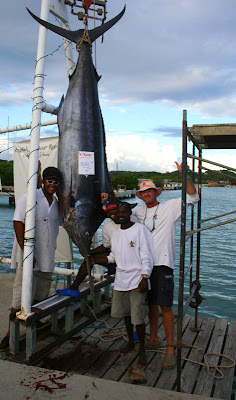 I think I sweat more than any boat skipper had done before as the marlin made me fight to keep the boat up with it. We traveled over 2.5 miles according to our GPS and did many circles while we fought it. Anyway, I could go on and on about that fight, but at no time did we feel that we were going to be beaten by the fish. I am sure that with our gear and preparation that veterans Tony, Big John, Chopper, me and the other crew…we will be ready for that grander this year. We finished 2nd behind Derrick Biel’s Obsession last year as he managed to catch one small white marlin more than we did. In fact of all the marlin that we both brought to the side of the boat, none were killed. All we had to do was bring them to the side of the boat, take photos of the fish and then carefully release them to fight another day. You are only allowed to bring one back to the scales if you want to and if it’s over 300 lbs. There is quite a bit of controversy about this and I won’t go into it here, but thanks to the pull out of the Japanese fishing boats last year from the area, we have more marlin than we have had in years. This year’s tournament will prove to be a contest like none seen here before. The largest marlin brought to the scale in this tournament over the past 41 years was a 772 lb Blue that was caught by some years ago by a foreign boat. I think this is a pic of that marlin. 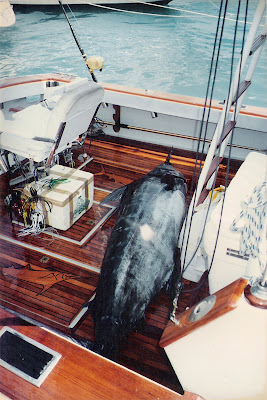 We want bigger this year!!!
Anyway to get people even more excited about this event they are having an opening party next Saturday night (the 19th) at Club Havana in English Harbour from 8pm. Things have gotten very quiet out there as is usually the case after sailing week and this party is usually the biggest thing going on. Come by if you are looking for something to do. There are prize giveaways and plenty of big fish stories and strategies. It’s always a good drinkup and party.
This year TEAM XTREME will be sponsored by Adventure Antigua as usual, but we are looking for another sponsor who can help us cover this costs. The thing about big game sport fishing is that it is extremely expensive. The entrance fees alone are about $500 us and then there is a hell of a lot more in fuel and gear. I will be blogging about our pre-fishing days as well as proper reports of the day by day action. This was a training day last year when we ended up releasing a fish of about 350 lbs. 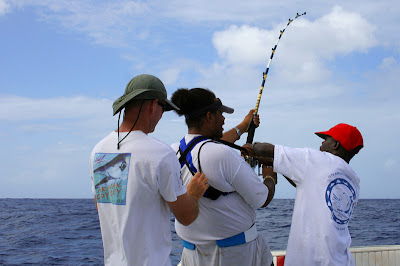 If you can think of a possible sponsor that would like to get some mileage out of this then please let me know J My poor uncle Jim is also determined to catch a grander and has spent considerable time and money trying to train and prepare his boat and crew for that event, but last week they hit a stumbling block after fighting a small fish for over two hours. Three of his (geriatric) crew had to take turns fighting the Blue Marlin which eventually freed itself close to the boat after several futile hours of punishment. I even here that a doctor was involved later that night, but can not corroborate this story 100%. Lucky for him there is a Sport Division where you target smaller fish like Mahi Mahi, tuna and the like. Here you see the stronger man on his team having a hard time with a mahi mahi..: 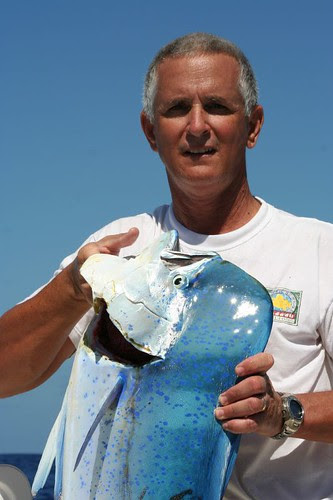 Big Blue Marlin are for younger stronger crews like the Adventure Antigua Xtreme…hahahahahahah We fish this weekend and will report then.