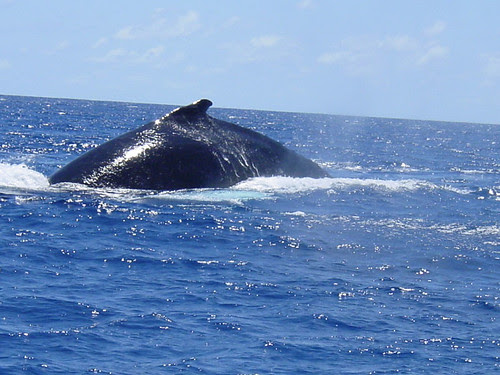 I always find it very funny when people say to me "I just couldn't live in Antigua because you don't have seasons". Although we don't get cold here we do have very specific and noticeable seasons.
Just yesterday, someone was saying that they couldn't wait until spring time when the Marlin come around in large numbers. I guess that's the biggest change you notice here with regard to seasonal changes....the change in species of migratory animals. Winter time sees many animals that are fleeing from the cold weather that is chilling out North America. When I got back from being away from Antigua for a month the first thing I noticed was the number of Osprey and other birds. I have also seen many kingfishers and Red billed Tropic Birds. There are so many species of birds that arrive here or pass through at this time of year. But its not just birds, the Humpback Whales will be here from about the end of January until April which is always something we boaters look foreword to. See these amazing creatures up close is something special indeed. Make sure that if you are here during that time you keep you eyes open because you may see them "breach" or spout out in the Atlantic. We tend to see more dolphins in the winter as well but they are here year round. Another species we get here in large numbers during the winter is the "tourist". Some fly all the way from Europe while others migrate by ships all the way from the US Mainland. Since we want to show them how cool our island is, we tend to get quite busy at this time of year. As the winter gets old and signs of spring show up we see other animals showing up. For me, it’s the time of year to get my fishing tackle set up. Mahi Mahi (the Hawaiian name for Dolphin FISH) school in large numbers here in the Caribbean at that time and apart from being great fish for sport fishermen, they are absolutely delicious. We often go camping in Barbuda for the Easter public holidays and will eat plenty of Mahi Mahi then. Yum I can't wait......then again there are some great things to eat coming up this month too...... Another funny thing that visitors to Antigua comment on is how surprised they are that we have Christmas Trees and eat turkey and ham for Christmas. Why not? I think i'd like to eat ham and turkey more often myself, but for sure at Christmas time. I know it's strange for people who are used to snow and freezing temps during the "holidays", but its still the same deal down here give or take 20 degrees. hehehe
Anyway, back to the seasons before my stomach makes too much noise with all the talk of ham and turkey.......
As spring turns into summer the big game fishing heats up with the massive Blue Marlin congregating off-shore in large numbers. They are very difficult to catch but can be a fisherman's dream "fight". Some of my crew and I am hooked on hooking marlin and you can read about it in the blog entry about Tony. 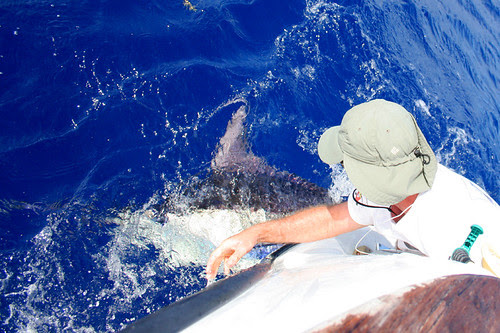 This is also the time of year when massive flocks of migratory birds show up in the islands to lay eggs and feed their chicks. To assure this all works out there are also even bigger schools of tiny pilchards and other small fish hatching out. These poor creatures almost at the bottom of the food chain are gobbled up by birds, dolphins and other fish. It’s a tough time of the year for them for sure.
For me these days, the summer is my favorite Season with all the cool things that started in spring reaching their full potential. It is also "hurricane season" but mostly the weather is best at that time of year. I just love the clear waters and calm seas of the summer and it is when we have the smallest number of migratory "tourist" species here, and because of the free time we end up playing more. Fishing, diving, camping, traveling to other islands, carnival,.....there is plenty to do with our freed up time in the summer and usually the weather makes it all worthwhile. The chicks are starting to leave their nests and are all getting fishing lessons from their parents. You should see the Laughing Gulls. I swear that they have designated teachers giving flying and fishing lessons. As we pass though Rabbit and Exchange islands in August we will see 20 little grey juvenile laughing gulls sitting in the water around one adult. I am not kidding either……it makes us laugh every year. Another bunch of animals that are nesting in the summer are the endangered Hawksbill Turtles. Do you know that one in 10,000 eggs will eventually become a mature adult. The rest just don’t make it. Anyway, these beautiful majestic reptiles nest between May and November and each female can lay over 400 eggs during that time. You will learn all about them on the Eco Tour.
Of course there is a chance that the weather will do the opposite and a destructive hurricane will cause trouble, but that just adds to the excitement of the summer. Remember that over the past 50 years we have been hit by 6 hurricanes, so the chances are pretty slim even though they are there.
As summer comes to an end, the winds calm down even more and the heat seems to slow you down a bit if you are one of the unlucky ones who has to work on land. For us, it means more swimming and snorkeling. The months of September and October can be very hot and still, and sailing can be tough. Powerboating is perfect then though, and it just happens to be the time of year when the Wahoo fish start showing up in large numbers. Wahoo are a delicious fish shaped very much like a muscle packed torpedo with stripes. They fight extremely hard and Tony, the self proclaimed “Wahoo King” longs for this time of year to catch and eat wahoo on all his days off. IT really is a beautiful thing to be out on the water with friends when the deep blue water is totally glass calm. We have been fishing many times where we caught so many fish that we had to come in early……so much fun and action. …..but there are other times as is the case with fishing when we have been out there all day and ended up with nothing. Those days are still fun because the people I go fishing with just love the sea. Late in the “Fall” the weather changes a bit with the sea chilling a bit down to the very low 80s and the air dropping a bit. American cold fronts can make it all the way down here too making it quite windy and for us…a bit chilly. Visitors laugh at us when we mention that we are getting cold (since for them 83 degrees is a dream come true), but you do feel and see the changes throughout the year. It’s just as interesting as anywhere else that you may call home.
I am sorry, but I know it sounds cheesy saying I love living here. I just can’t help it….......
The photo today is of a humpback whale we saw while doing the eco tour. The guests on board was awestruck....which always makes me happy. I added another of me releasing a blue marlin (most of the marlin caught here are released to figh again another day).
Posted by 365 at 10:20 am 2 comments: