Before 8 am the winds are very light hovering somewhere around 10 knots. Yesterday I motored our Carriacou sloop Ocean Nomad 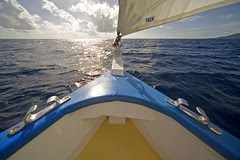 over to the brand new and very fancy B Dock in Jolly Harbour. Charles Kenlock came over to congratulate me for being the first boat to ever throw lines on to his new dock. Adventure Antigua's day sailing boat was looking fantastic! Later in the afternoon Genesis came alongside with her skipper Alexis Andrews and his family. It was good to see the two 40 foot Carriacou sloops together again and interesting to look at the slight differences too. Anyway, there should be 5 races today in Five Islands Harbour and outside Jolly Harbour and the two sloops will be match racing the whole time. We are in the Cruising Class with just three classics with all the other cruisers. The faster Racing Class boats will be starting behind us but doing the same course. Our crew will be sporting our new T-shirts. It should be fun. Party at foredeck and castaways later.
Posted by 365 at 7:46 am No comments: