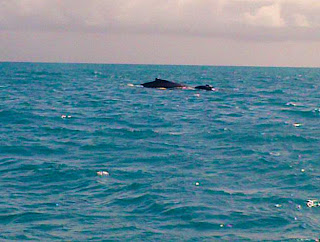 Our Humpback Whale season here is usually from Feb until May and this year we got off to a slow start mainly I think because of weather. Feb was pretty rough and with all the white caps out there it wasn't easy to spot whales spouting or breaching. People kept asking me when it was that they were going to see whales, and I kept on saying that March was the best month to see them. Anyway, march came and sure enough we started seeing whales. Nicola and I did a Observer Radio 91.1FM talk show interview with their Voice Of The People show to speak about whale watching and the best practices that should be used during whale watching. We also started a facebook group called The Antigua and Barbuda Whale and Dolphin Network. This facebook page had a goal of letting people know about whale and dolphin sightings as well as providing awareness about whales and dolphins. Check the page out this month if you can. 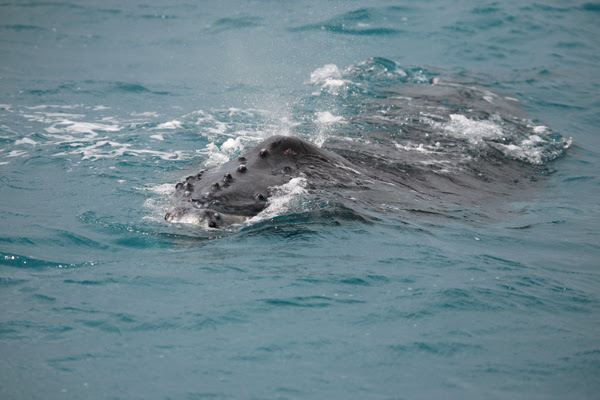 Anyway, our tours have been seeing whales and dolphins each week for the entire month and while all of my crew and many of our guests have been lucky enough to see them recently, the office team has been getting quite jealous especially during whale sightings.

Last week during a tandem Xtreme Circumnav tour both captans Ross and JD spotted a pod of whales just off The Grand Pineapple Resort up near Devil's Bridge. Forty of our guests were lucky enough to see these amazing creatures with their young ones swimming freely without fear in our waters. It was a great experience. Yesterday morning very early in the tour Ross called me and said that he and his tour were whale watching just outside Jabbawock beach. This was quite surprising to me as this is the area where I have spent most of my life and I have never seen one close into shore there. Anyway, I quickly called Nell and Mom in the office so that they could go have a look too from the shore. The mobile phone image which is featured at the title of the blog was taken by Natalie who was part of Team Xtreme with Ross and Nicola. Finally they got a glimpse of these amazing marine mammals and within less than 7 days this was the second time we have seen whales on our tours. We have been seeing dolphins more regularly though and overall these calmer sea conditions have been making all of the boaters happy. For more on whale watching in Antigua check this blog or visit the facebook page. You stand a good chance of seeing them up close if you come on one of our tours between now and the start of June.
Posted by 365 at 7:55 am No comments: