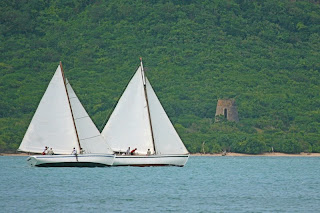 Yesterday was day two of the JHR Caribbean Regatta put on by the Jolly Harbour Yacht Club and from very early in the morning the winds sounded like they would be better for Ocean Nomad. The day before had been very frustrating with extremely light and shifty winds. When the crew and I left Jolly Harbour we could see the white caps coming down from Jolly Beach. It was blowing a good 14-18 knots before the start and we sailed around to get everyone on board ready for battle. There were going to be three races and we had to win all three in order to beat Alexis Andrew's "Genesis" which was the other 40 foot Carriacou sloop in the classic yacht class. 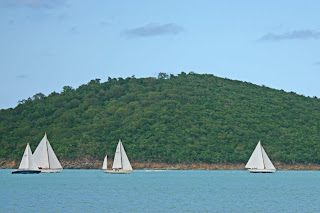 Race one started just after 11 am and we were out front from the start. Alexis managed to catch us on the down wind leg and the lead changed a few times during the race. We ended up getting some very good lifts upwind and managed to beat them convincingly. 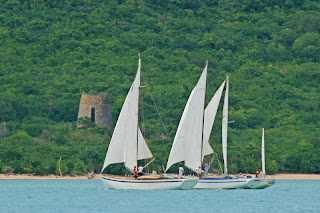 Race two was interesting with us almost getting an "over early" at the start just hitting the line exactly on time. Some of the crew thought we jumped the gun but the race committee called "all clear" on the VHF radio and on we went. The lead changed a few times, but we were ahead for most of the race and ended up winning.

We now had beaten Genesis three times to their two against us, and there was one more race to go. We started very well again but the winds had died considerably and our pointing ability was suffering. Genesis lead for most of the race, but it was neck and neck until the last leg when the winds got light again and they pulled away to win their third race matching our results. We were all extremely happy with a draw. It had been Jason's first race and he was delighted. 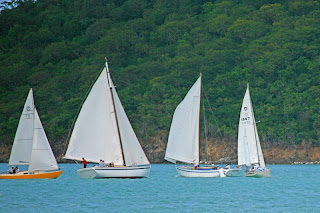 It had only been my second regatta as skipper on a Carriacou sloop and to finish tied with the veteran crew on Genesis was good enough for me to be happy as well. The photos were taken by my GF. Thanks babe!
Posted by 365 at 12:16 pm No comments: