200 miles from the BVI to Antigua

This Antigua Blog is sponsored by Caribbean Real Estate: 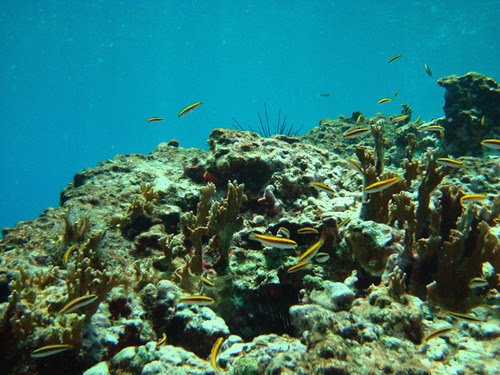 After the prize giving at the HIHO windsurfing adventure we went back to the boats for a few hours sleep. The plan was to get up and out very early the next morning. Coming back on the boat to St Martin was Jean-Marc and Ricardi, the two from St Barts and my crew, Tony and JD. We knew it wasn’t going to be easy because the winds were up again fairly strong. Our last stop in the BVI before we hit the Atlantic was at the very top of the Eustatia Sound on the North-East side of Virgin Gorda. It is lovely up there and a nice place to stop for a breakfast with the gang. Unfortunately most of the people on board managed to lose it somehow before we got back to St. Martin. It was rough and if you are not used to being in the open Atlantic on a rough day for 5 hours solid then it can be a challenge. The boat took a beating and I don’t think any of our trip could be described as being fun. IT was incredibly hazy as well and we didn’t see St. Martin until we got a few miles off. I guess this part was fun for the guys who had been sick as they all got very excited for the first time since we left the BVI hours before. We got in too late to clear customs and immigration, but released our residents from the boat anyway. (Not legal I guess) I held on to their passports to clear in early the next morning. St Martin can be a pretty relaxed port and many boats don’t ever bother to clear in or out when visiting the Dutch side. I did things almost by the book by clearing in and out the next morning. It got incredibly rough and we made the decision to wait an extra day before we did the last 90+ miles back to Jolly Harbour, and the home of Adventure Antigua. We had quite a few boat bits and pieces to buy there and spent the day shopping and of course having the obligatory stop at a fast food joint. We don’t have either McDonalds or Burger King in Antigua yet thank God and many Antiguans make a stop at one of these places when traveling abroad. After all the nice food we had in the BVI, Burger King just wasn’t as good as it usually was. After some more crazy St. Martin traffic and some more rushed shopping we were tired and ready for an easy dinner and some sleep. We went to the Green House bar where we could check the weather from my laptop and have a relaxed dinner. 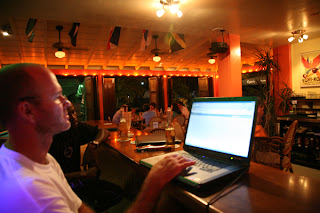 Yes this is me with +1 specs on! JD snapped this pic of me and tony checking the weather. I now have to use glasses to use my laptop. Tony and JD were drunk with tiredness. 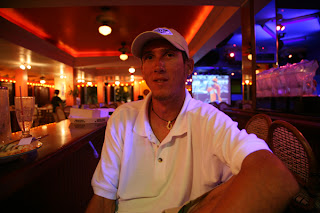 IT had been a great trip for us and it was very nice to just be chilling with the core crew on the last night. As you can see, Tony felt the same: 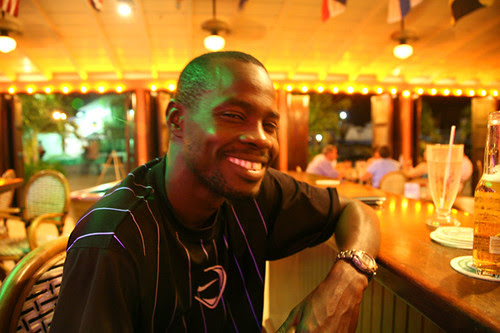 We managed to escape St Martin the next morning without having any more fast food, and the best thing about it was that the winds had gone down. We went straight up to St Barts to have some lunch that we had gotten before we left St Martin. We were not allowed to clear into St Barts so just held on to a mooring on the national park outside their main harbour. Antiguans can’t go to any of the French Islands without a European visa, but we still managed to have a nice lunch offshore there. I also jumped over to see how nice the snorkeling was at their park. Mom I didn’t wait 30 minutes after eating either……hehe 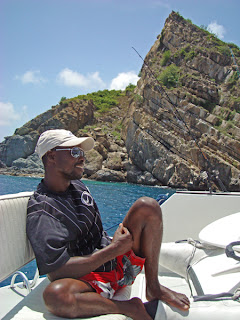 The snorkeling was nice, but had plenty of current. I think it was better suited for scuba too as it was mostly very deep. After getting a good sting on my face I stayed just a bit longer to see a cuda and some jacks and the type of jelly that stung me and I was out. IT was a strange jellyfish that I had never seen before and the sting was nasty although it only lasted for about 5 minutes. Once back on board we started cruising back to Jolly. It wasn’t too bad and JD and Tony went and stood up on the bow for most of the ride home. Half way there JD shouted “Dolphins” and I then saw about a dozen Atlantic Spotted Dolphins playing around the bow. I did this little video with our new small camera.

We did quick time to Antigua and got in well before Customs, Immigration and the Port Authority were due to close. They had told me when we were leaving that they now closed after 6 pm, but in true Antiguan style the only person at the office in Jolly Harbour was Customs. This was just after 5 pm and he stayed the whole hour doing nothing at all. I asked him if there were forms that I could fill in, but he insisted that I couldn’t do anything until the other offices opened up the next morning. The next morning we waited for them to open and as expected it was customs this time who was late……almost an hour. Anyway, the new shift was all very nice and got us cleared into Antigua and Barbuda without much trouble. Tony and JD had to leave me as they were working on the other boat. We had had enough play time and now had to be back at work. IT had been quite an adventure and we were almost immediately thinking about where our next one would be.
Posted by 365 at 8:56 am 3 comments: