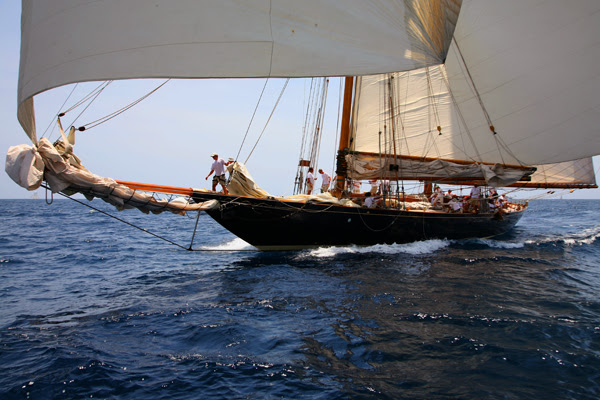 Some of my earliest memories as a child are of a time when my mom and dad were living in the Bucket of Blood Apartments on the other end of Dutchman’s Bay here in Antigua. Our neighbor was Eddie Barreto who my cousins and I called “Eddie spaghetti with the meatball eyes”. I loved Eddie for two reasons: the first was because he has lots of little tortoises which we would feed hibiscus leaves and flowers to. They just loved those flowers. The other reason I loved Eddie was that he had a yacht. I was 5 years old when I joined him with my Dad on a 90 mile sail down to St. Barth. It was my first big crossing, and I remember that it was so much fun being out in the big ocean swells. 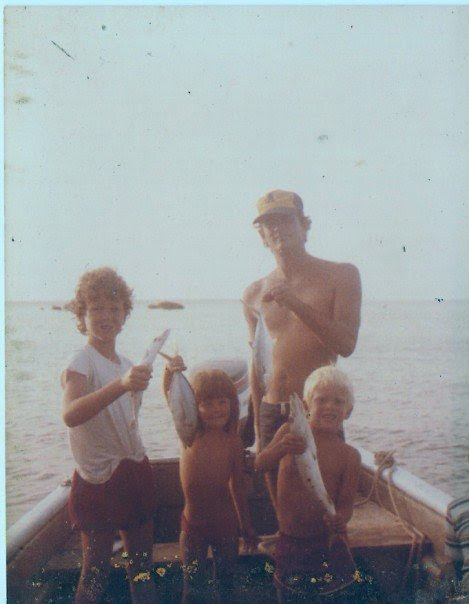 Although going out on powerboats with my dad (see family pic above) was what we did almost every week, I think I have been sailing fairly regularly since then. My grandfather (seen in the pic above with my grandmother and all 7 of their kids somewhere here in Antigua in the 60's) had several yachts when I was very young as did my uncle Jim. In fact I was just speaking with Jim about St. Martin’s Heineken Regatta which he won on “First Run” back in the early 80s. We can’t remember the year but I do remember that it was very windy and rough. We sailed around the island beating everyone easily on that super fast Beneteau racing machine. I also sailed with Jim in many of the Antigua Sailing Week regattas here as well. I think he sailed in almost every Antigua Sailing Week until a few years ago winning cruising class on the classic English yacht “Torridge” about 5 times. I also sailed a few sailing weeks with Carlo Falcone, owner of the Antigua Yacht Club Marina, on his Caccia Alla Volpe. 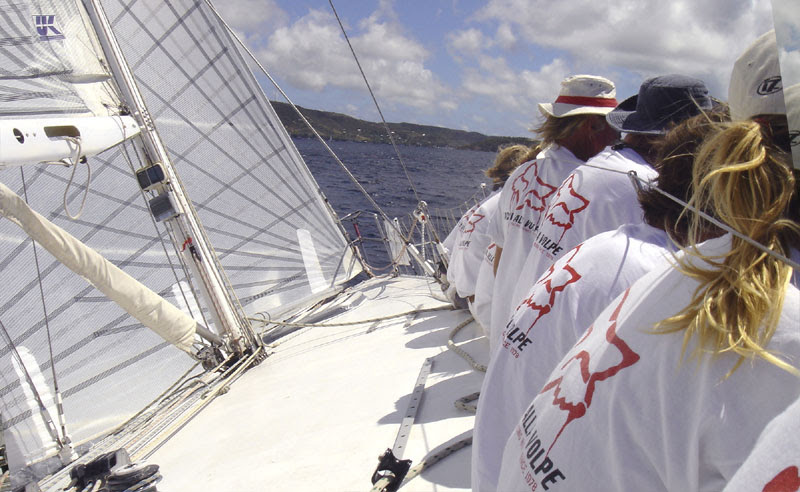 I would have raced more of these regattas as well as more of Antigua Classic Yacht Regattas held the week before, but ever since I started Adventure Antigua we have been driving boats for the press. Antigua Sailing Week hired me to drive the press boat for the first three years that I was in operation and we have done several private charters for press and others in the following years as well. I took this photo: 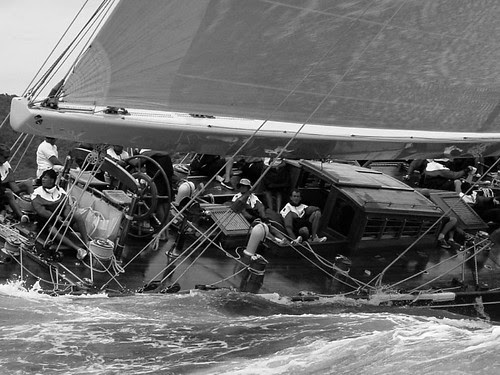 This helped educate me on the more traditional side of sailing as well as spark interest in the whole classic yacht movement which gets more and more popular every year. Of course, my grandfather (Nick Fuller Sr.), Uncle Jim and Eddie Barreto all have been into Classic Yachts since the years when they may have not been considered classic, but my interest and the interest of the general public in these traditional beauties has taken some time to catch on. 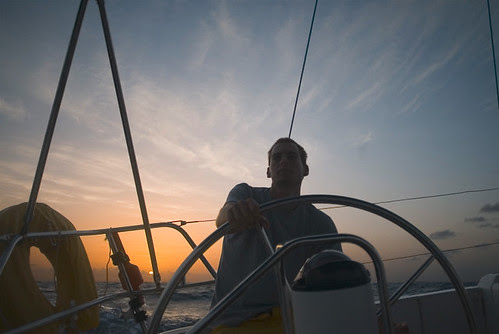 I would have never thought about hiring a classic yacht and sailing down the islands to windsurfing regattas that I attended for all those years, but the next time I sail down to the BVI will be on a classic for sure. I think I have chartered and skippered yachts back and forth to the BVI about 7 times and although most of my yachting experience has been here in the Caribbean on “plastic” (fiberglass) yachts I think those days are coming to an end. Here you see my bro Ali, after we arrived at the Bitter End in Virgin Gorda just before windsurfing the 100 mile week long HIHO regatta. 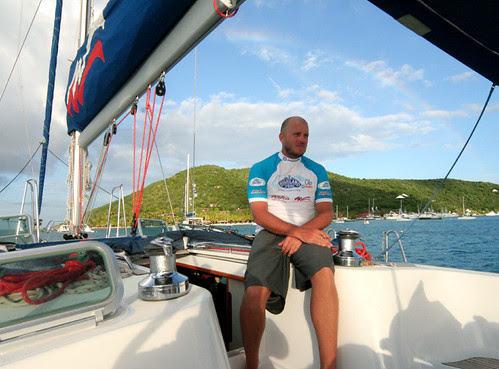 They were all nice and shiny but none had character or a soulful feeling of tradition. Sailing on a classic and just being next to one is a whole different feel. For me it’s even more interesting when the classic has been traditionally built right here in the Caribbean. Every single piece of wood has a story to tell and the process if filled with amazing history and tradition. 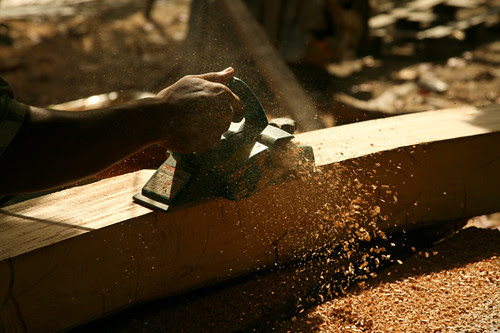 The Grenadines are a group of islands belonging to both St. Vincent and Grenada and are situated between the two larger islands. The history of boat building there is incredibly interesting and I will have to blog about it another time, but Eddie was the first person to get a boat from there that I remember. He and my uncle had raced there in the old days against boats from Bequia and Carriacou. Bob Dylan had a boat built from there and Uncle Jim raced against him there. Anyway, Eddie sold his boat to Alexis Andrews who I have spoken about in my blogs before. I would see Alexis on his Caribbean sloop racing against the other Carriacou, Bequia and Petit Martinique boats during classic yacht regatta each year. 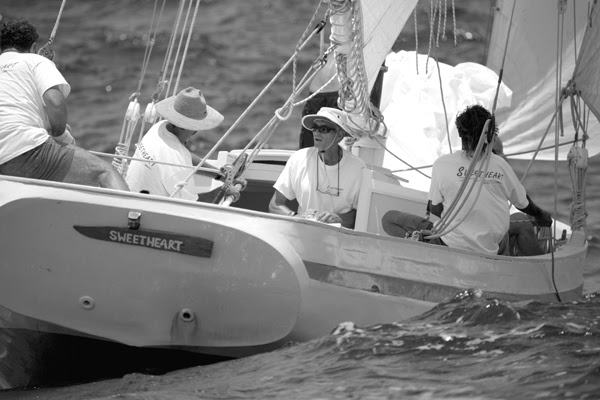 The yachts were so colourful and the crews all seemed to enjoy themselves so much. A few years ago Alexis turned up with a new yacht, Genesis and not only won his class in the regatta but won the title that year of most beautiful classic yacht. 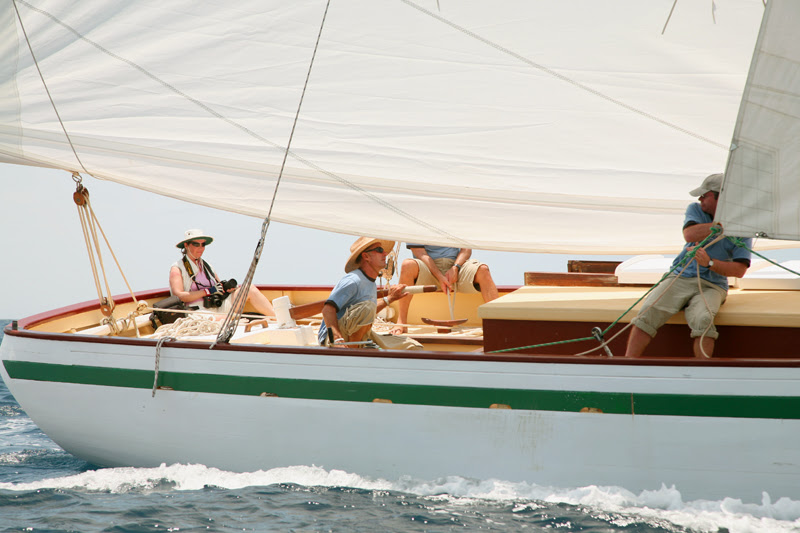 Genesis was build traditionally by Alwyn Enoe seen in this image below. 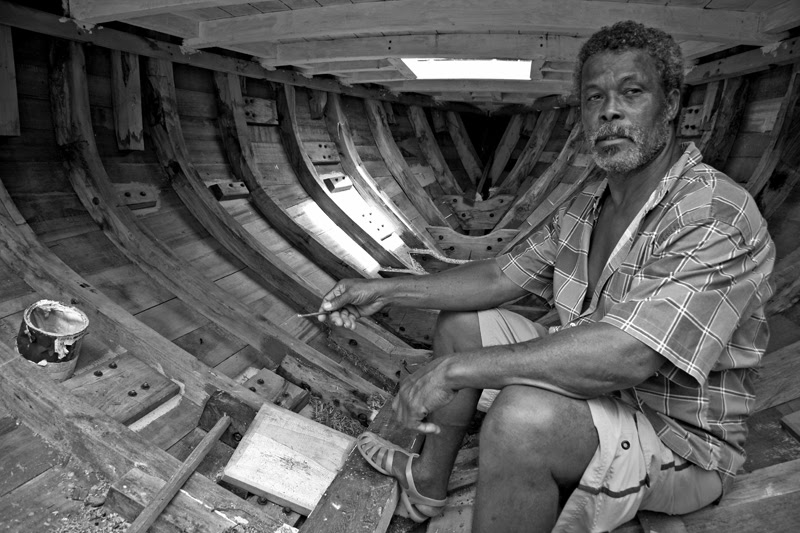 He and his sons had build several boats now calling Antigua their home, and Alexis had spend months each summer in the Grenadines with them and with other traditional boat building families taking photos and learning about this ancient trade. Alexis wanted a larger and faster boat than the one he got from Eddie and Alwyn built Genesis to be the fastest of them all. Back on dock having a drink at Skulldugery with all the Grenadine boats stern to, Alexis sat there glowing with pride after just winning the first race convincingly. Two of Alwyn’s sons who had built the boat were there racing as well. Alexis said “you should get one of these”. I am sure he has said that to about 5000 people so far, but I immediately took up the offer to have a closer look. Sitting on the floor down below while Alexis explained a bit about the process involved I dreamed about sailing around the Caribbean on one of these boats. I told the boys that I would get one but not for a few years. It took a few years before I saw them again down in Carriacou last November, but to my surprise they remembered me and it seemed as though they had been expecting me. As I said in my “Tide is changing” blog back then, I paid Alwyn and his family a deposit for my own Carriacou classic sloop, before Christmas they had already made the journey into the forest to find the perfect trees. 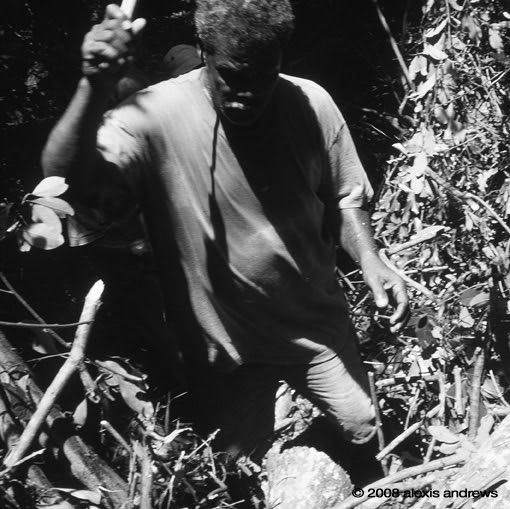 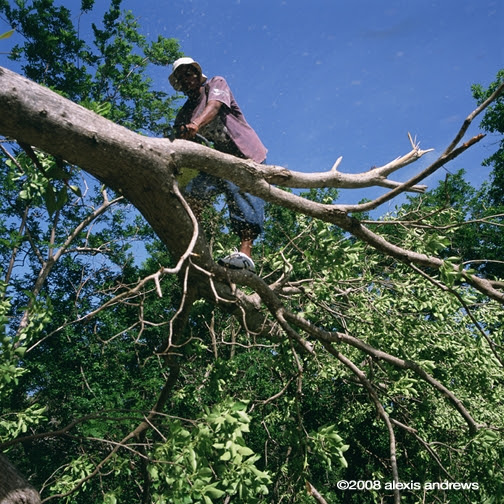 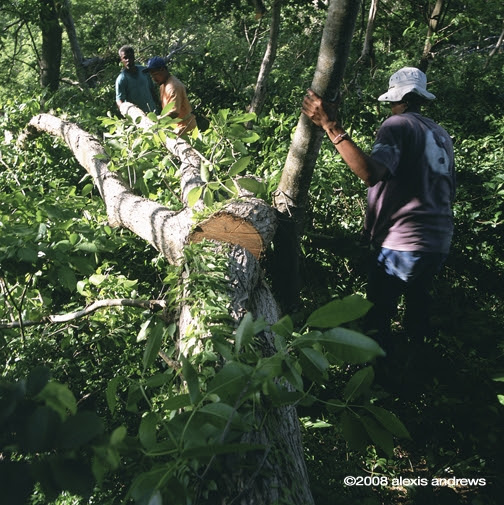 This first stage of the boat building process hasn’t changed in thousands of years here in the Caribbean and although the tradition has all but died out, I am as delighted to be part of it as were Bob Dylan, Eddie Barreto, and Alexis Andrews and many more before me. I am going to write a whole bunch more about it in the future, and I have to tell you that I haven’t been this excited in years. The photos taken in the jungle above were shot by Alexis Andrews who has two books coming out soon about the whole process including loads of photos and info on these lovely caribbean classic yachts. Check here for more info on that. We are collecting White Cedar saplings to replant in Carriacou which has never been done in this process before which i think will add another element to these boats built from a precious but renuable resource. On another note, I haven’t raced on my windsurfing board since I limped back to the beach after the 2007 HIHO regatta, but Sunsail is having a little regatta tonight and I think I may enter. Speak tomorrow if I make it back to the beach. Eli
sailing antigua
Posted by 365 at 12:59 pm 7 comments: