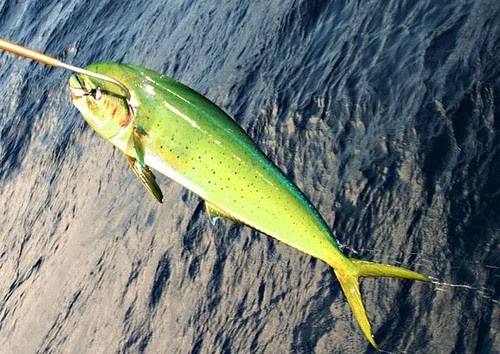 Friday’s registration was a fairly low key event with skippers and some of the crew taking part after drinking heavily at the free rum bars that were set up by Mount Gay on the dock. Who’s idea was that? Free rum drinks for fishermen? Wow…..i think I can remember some of the things that were said at the briefing, but it seems like a very long time ago at this point. Phillip Shoul, the chairman of the Antigua Sport Fishing Club welcomed all the boats before going through some of the rules, divisions and prizes. There seemed to be about 10 boats from other islands and about 25 from Antigua. After the skippers meeting I made sure that team Xtreme Caribbean Real Estate knew the plan and was all set to meet up in the morning. 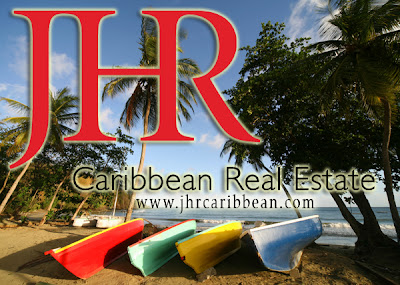 Big John had quite a bit of work to do in setting up the smaller baits and tony had to organize lunch. Francis and David (choppa) were staying near the boat and we were all going to meet up for 5:30 am the next morning. There was a bimini start the first morning where all the boats line up at the entrance of the harbour and race out together towards their secret fishing spots. There was two of three boats with similar power and size to Xtreme and it was setting up to be a fun start to the event. As we listened to the countdown on the VHF nerves rattled and choppa broke the silence with his “war call” which sounded more like a mix between a parrot and chimp call. Anyway, with smiles wide we hit the throttles all the way down at 0 seconds and flew out the entrance with 35 or so boats behind us. Going into 6 foot waves at 40 knots was a majour rush and we continuted at similar speeds for 16 miles straight out into the Atlantic where we had marked our FAD position the day before. Staying right next to us the whole way was Wa’apen, a boat from St. Barts, which had done the event several times in the past. They knew that being a local boat we would have a good spot and followed us for almost the entire day. We got to the FAD and fished it for about 45 mintes without a strike. We saw nothing and the action we had the day before didn’t materialize. Ms Ashley which is owned by Phillip Shoul came up and past us going even further east and we kept an eye on him even as he started disappearing below the horizon. You have to call in all of your fish on the VHF radio to the organizers and if I heard phillip calling in fish I would have gone up to him. We did anyway thinking that he may be fishing another FAD up there. Half way up to him we had a strike but very quickly could tell it wasn’t anything big. It was a small wahoo. These fish are only found out in the deep when there is a floating object around. Wa’apen was fairly close and when I called in the fish they made a turn to come closer. We were both looking for the floating object. Before we saw it we had another wahoo strike but the fish managed to get off. We quickly changed some of the lures from massive marlin lures to smaller ones which had Tobago flying fish beneath them. These lures are better for catching wahoo and mahi mahi which were sure to be around the floating object. Just then I spotted it and told the guys to stand by. As soon as I uttered the words we had fish on. Mahi mahi were jumping behind the boat. For another hour or so we had manic action catching and losing fish, bringing lines in, changing baits, pulling fish into the boat, cleaning, yelling….. This photo below was taken this Easter when we had three mahi on at the same time and gives you an idea of how it would have looked (minus the back row of seats.) 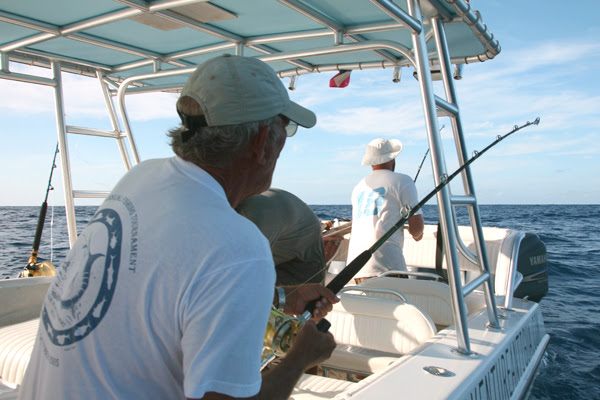 It was total madness as it always in when you find a big bit of flotsam that is supporting a massive school of fish. Wa’apan was catching them too and both of us had to keep track of where the flotsam was. It was a wooden shipping pallet covered with barnacles. There were probably hundreds and hundreds of wahoo spread up to a mile away from it feeding on flying fish and tiny bonito. We could see them jumping out of the water and the frenzy was in full swing with baby flying fish being close to the visual bottom of it and Wa’apan and Xtreme Caribbean Real Estate at the top. It was starting to be a slaughter and the crew had blood all over their nice new fishing tournament shirts provided by Caribbean Real Estate. John who is first mate on our team and I had a quiet discussion while the others faught a mahi mahi. We agreed that although this was fun and was winning us points in the overall sport division, it wasn’t what we were really here to do. We were here to catch big marlin we had no chance of doing that here. With some hesitation we all decided to move on in search of a big blue marlin. We left the bite as hot as we had found it and had about 150 lbs of wahoo and mahi mahi in the fish box. In fact it was so hot that one of our mahi mahi had actually swallowed both Tony’s and Francis’ baits at the same time. They both faught the big mahi to the boat and then argued for the next 20 minutes about who’s fish is actually was. With the big lures out we were back on track towards the famous “little bank” also known as the “east bank” where the little tuna congregate and the marlin gather to feed on them. Once again “Wa’apan” was following us. On the way there John and I spotted a big fishing crate floating and although there were some fish around it there were no wahoo or mahi so we kept on going to the bank. We passed a spot where last year we had landed a small marlin but nothing happened. We got to the bank and started working it with our buddies “Wa’apan” from St. Barts cloaking us. For an hour we saw nothing at all and the adrenalin packed action of earlier in the morning was taking its toll on the boys. Choppa was passed out cold and Big John was looking tired too. Marlin fishing can be very slow but we all knew this and were still ready for anything that would come our way. I had a nice text from Teddy D. up in the USA wishing us luck and telling me he was following the blog. We could hear the other boats calling in strikes. The Nightwing fishing charter boat “Vitamin B” owned and operated by Mike Piggot (spelling ouch) was having lots of action and we were happy for him. Jolly Harbour massive!!!
My dad had also been having some action and had released one blue already. They had lost a big one too due to equipment failure. I could tell he wasn’t happy which was expected. Follow Me 4 from St. Martin had landed a blue marlin which meant that it was probably over 300 lbs and local fishing charter Overdraft owned by Frank Hart was doing well too. We were trying not to get too frustrated but with nothing happening it wasn’t easy. We took a longer run than normal North-east from the bank towards the thousand fathom (6000 feet) drop off and then it happened. Read about “IT” tomorrow.
Posted by 365 at 11:07 am 1 comment: