From last weeks blog: "What happened next will never be forgotten and could have ended in a crew fatality. I will tell you about it in the next blog." 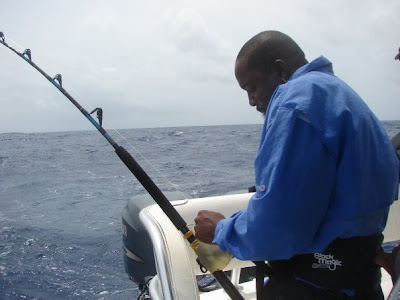 As the line came out of the water, Big John who always is Xtreme's wire man, grabbed the leader and took a wrap. The big marlin below didn't move any closer to the boat and its substantial weight was pulling john. As he felt the full power of the fish Guilli released the drag into free spool. John didn't know what was happening, but i knew that Guilli had just lost the fish. At the time i had no idea why he released drag on the reel, but as he did it the huge strain that was on the line now with no resistance caused the line to just burst free all at once. A "birds nest" (huge tangle) was a sure thing, and i screamed at Big John to hand line the fish to the boat with all his strength. The fish acted like he hadn't even started yet and slowly swam away from the boat pulling line out of John's hands and taking line from the tangled mess that was on the reel. I knew what was going to happen next. The line got caught on some part of the tangle and with the fish slowly going Guilli started being pulled over the side of the boat. Our fishing is done using a special stand up fighting belt called a Black Magic Belt and your reel is attached to the belt which is held alsmost like a harness behind your back. 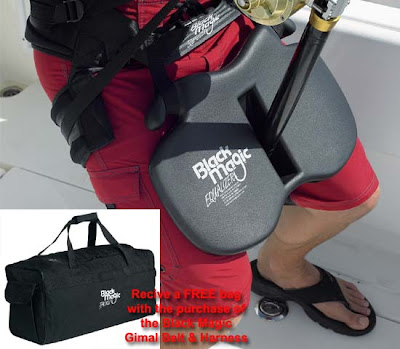 You and the reel are connected and you don't want to have a tangle when a 450+ blue marlin is swimming away from the boat. Luckily there is a strap on the back of the harness and we usually make one of the crew hold this to keep the angler stable in the rough seas. As the rod, reel and Guilli started getting pulled over the side by the marlin Tony held tight and with a snap, the 80lb line broke. Tony turned and slumped his body over the transom as if crying. John did the same on the port side... Kiesha looked scared and stared at me with a strange look on her face. Guilli looked at me expecting my reaction, so i gave it to him. "Why the $%*@ did you release the drag"!!!!!!! We were all devastated and couldn't believe what had just happened. The fish was big and we were sure it was over 400 lbs and maybe as much as 500lbs. We would have gotten biggest fish of the contest and would have taken our score above 1000 points. We just lost $20K in prize money, an amazing lure and amazing fish, but worst of all we just lost winning the competition by far. No other boat had caught a blue marlin that day and only white marlin had been released. My crew sat in silence as I reved up the engines for the ride home. It was now after the official lines in and time to go in. When we fight small fish on the boat that we are going to keep we gaff them when they are at the side of the boat. Once we have gaffed them we then have to take them up to the fish box and the angler has to release the drag to give us enough line to get to the box. The only thing i could think of is that with all the stress of the fight and the pressure that a big fish brings with it, Guilli just got confused when Big John grabbed the leader. The fish was not ready to be gaffed and hadn't been gaffed. I have faught marlin where we touched the leader only to have it swim off not to be seen again for an hour while the angler tried to bring it closer to the boat again. Big marlin fight hard and are very strong fish, so there was no way we would get that very much alive fish in the boat with just John holding the leader.
I could tell that all of the crew hated Guilli on the drive home. This was going to be hard to swallow. I know how serious Big John and Tony take tournaments and even moreso when they are Blue Marlin tournaments. All of a sudden 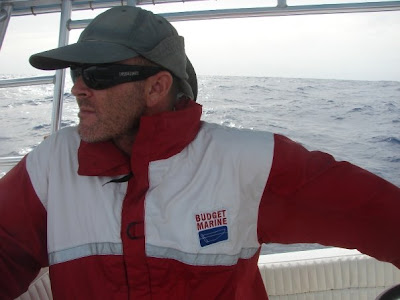 I stopped the boat and told everyone that my girlfriend gave me some good advice the other night which maybe we could use in this case. She said that buddhists believe that not accepting something painfull can only lead to suffering. I told them that it's happened and we can't change it.....Guilli "@#*$!& up" and he didn't mean any harm. He just made a mistake. We now had to think about making up for it the next day. We were leading the tournament still, but we didn't feel good. We would have to be ready the next day. 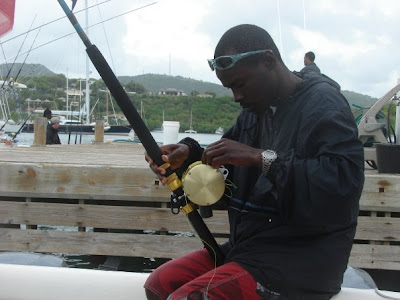 Back at the dock tony inspected the "bird's nest" and said that he regretted holding Guilli. ha ha ha
Posted by 365 at 6:09 pm 4 comments: