more clean up stories from the weekend..... 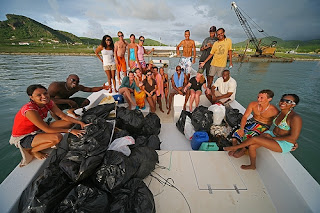 goto http://www.antiguabeachclean.blogspot.com/ for more of the mechanics of this effort too.
Anyway, as i mentioned in yesterday's "web log", a group of friends got together (however late Ms Kelly Gonsalves!!!!) and took off from Jolly Harbour towards Green Island. Twenty one of us took black bags for general garbage and white ones for recyclables and started scouring the shoreline and the vegetation alongside for any sort of garbage. It was hot and sunny with little winds. Barracuda and Permit fish watched and fed along the shore as we picked up plastic and glass bottles, nets, ropes, containers, cans, pipes, bulbs, floats and the list goes on. The crystal clear water and a cold beer were calling us when we had finished cleaning the two most northern beaches on the private island. Someone asked why the owners hadn't cleaned their own island and suggested that we take the trash to them. A great question! IMHO (in my humble opinion), The Mill Reef Club have owned Green Island for longer than i have been alive and have never built anything permanent there. They allow us all the free use of the island and have never stopped anyone from camping there or from using it commercially which is what i do on my Xtreme Tour. I think like several other private owners, they are doing a great service to our nation by keeping it free from development almost as if a reserve. The least we as a people can do is keep it clean after we use it and hope that it may remain as it is. Anyway, the beer and swim after cleanup made it even more enjoyable. 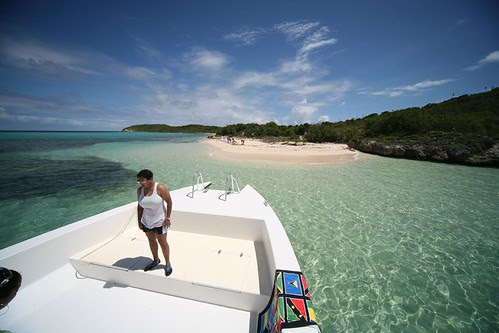 Afterwards we took off and went on to Rendezvous bay to spend an hour there. Twenty one people with bags can make quite a dent in coastal garbage in an hour and we did just that. We found more recently hatched out turtle nests too. One had just hatched out and we dug up the remains of the nest to find one little fella who didn't make it. 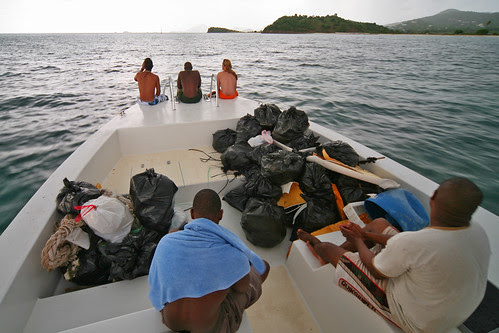 Anyway, there were 40 bags of garbage on the deck of the eco boat on the way home with some big nets and large debris as well. All involved thought it was more fun than "work" and I think we will do it again before the year is over. The rest of Green ISland's beaches could use some help.
At the start of last week we couldn't find anyone in The Solid Waste department who knew anything about the International Coastal Cleanup, but by the end of the week they were taking out ads in the local paper. They had workmen at several beaches and released a statement today to the press saying the event was a huge success. he he
Posted by 365 at 10:34 am 1 comment: