Thank goodness its monday.... i need a rest! 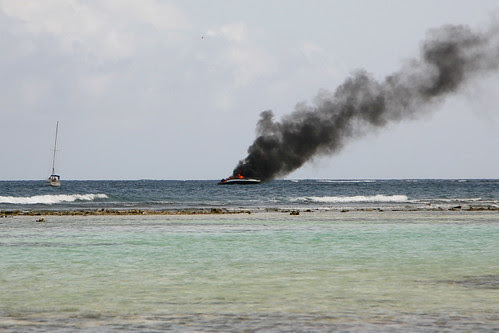 Wow, with active action packed weekends some people just are happy for Monday to roll around so that they can get some rest. This was one of those weekends. On Saturday a bunch of us continued work on Ocean Nomad putting in the last of the floor as well as doing the last bits of engine installation. In between doing that i would run over to help JD and Tony who were doing some engine maintenance on Xtreme. After calling it a day with the yacht i decided to take Xtreme out just to see if all the maintenance went well. My GF joined me for a quick sunset cruise over to Pinchin Bay. The sand there was softer than i expected and i realized that although i had been passing this beach all my life, i had never stood on it. The poor beach had been almost wiped out by the local family who owns the land there when they decided to mine sand from behind the beach. Now rocks that were once buried with sand form a barrier between the beach and the sea. It's not just a barrier for swimmers but for turtles also. This beach was one of the most popular nesting beaches on the west coast and it still has a high number of nestings. Anyway, the sunset was beautiful and the soft sand seemed to help me forget the horrid sand mining that had gone on just a few years before. Up the beach from us there were three American Oyster Catchers feeding on the rocks and in the sand. These beautiful birds are here in Antigua most of the time but in such small numbers that most people miss them. Usually I see them in pairs but today there was a third wheel.....maybe a relative. As the sun dipped under the very hazy sunset, bats from the hills began to do their aerial acrobatics in search of bugs to eat. The hills between Hawksbill and Pinchin must be a great home for all these insect eating bats. Long before it got dark stars began to jump out of the orange and purple sky. You cant keep them hidden for long even when there is haze in the sky.

We swam back to Xtreme and cruised slowly home as the moon rose over Five Islands Harbour. I thought that Friday was full moon or maybe is was that night.... either way i was exhausted from a long day and it was time to sleep. 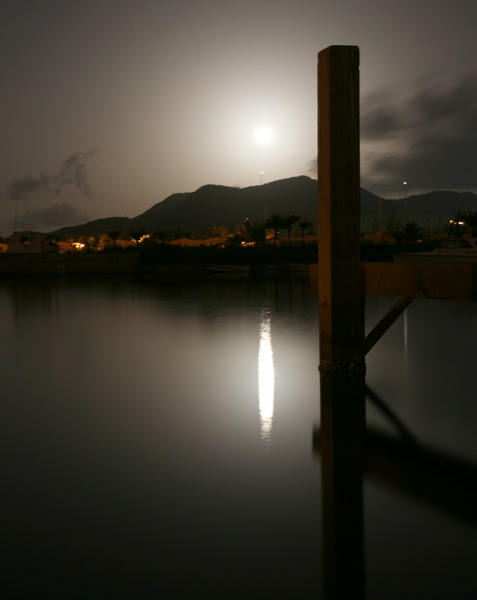 Sunday we decided to relax all morning with a late lunch at OJ's beach bar. I was going to break my ''fit for life'' regime and eat a burger and fries today! As i bit into the fantastic home made burger i watched my friend Paul Ryan zoom past on his big SeaRay powerboat. It looked like he had the family on board, and it would be a lovely day for them......or so i thought. The weather was better than anyone could want for boating, but Paul's perfect day of boating wasn't to be. My cousin Bel who works for the paper called me 15 minutes later asking me where is Morris Bay because there was a yacht on fire there. I reminded her that its where we spent most of our Sundays while growing up. We called it Callaloo as that was the name of our Grandfather's hotel there. Anyway, when i told her i was just paying my bill she asked me to go have a look for her. She knew i had my camera. At this time i didn't know it was Paul's boat, but when we got to Cades Bay i could see the black hull beneath the flames and billowing smoke. I called uncle Nick who as the owner of North Coast Salvage company, was always in tune with boat mishaps. He told me that Paul and his family had gotten safely off the boat after it caught fire. Just before jumping in he had called the coast guard. They arrived over two hours later after the boat had come to its resting place on the North-eastern side of Cades Reef.
We watched most of the ordeal wanting and waiting to see the ocean take over from the fire. It happened finally with a sharp burst of flames and then steam. Thank God nobody was hurt.
As we arrived back in Jolly Harbour I got a call from Alan Aflak telling me that there was an injured turtle inside of the harbour. This was strange as we never see big turtles in the harbour. We went down to see what was going on and Alan took us out on his boat to see it. The poor big green turtle had obviously been hit by a big boat and had huge prop scars along its shell. It seemed to be very tired and was only using its front flippers. The wounds look like they were not recent and the turtle had probably been suffering for some time. We dragged it to the entrance of the harbour where there was a beach we could pull it up on. It was here we could see the extent of the damage and it wasn't good at all. The big green was still alive but there was no doubt that death would be coming soon. A flipper was missing and the shell was cut right through and deep into tissue close to the bottom of its shell. We made the decision to call a vet as we didn't think it would make it. Unfortunately it didn't and finally succombed to it's injuries. 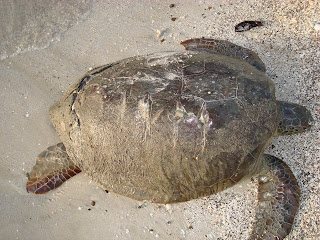 With the thousands and thousands of hours that i have spend on powerboats in the Caribbean i always am amazed that I have never hit a turtle. Keeping a sharp eye open for turtles and all the other things that can be out there in our path has paid off so far. I just hope our luck continues.
We got back home exhausted just in time to receive a phone call from someone at Darkwood beach. There was a whale close to the shore swimming slowly past. A whale! In July! Immediately i thought something had to be wrong, but it was 7 pm and almost dark. This story would have to pass me by.
Posted by 365 at 8:13 am No comments: