a ground swell is coming 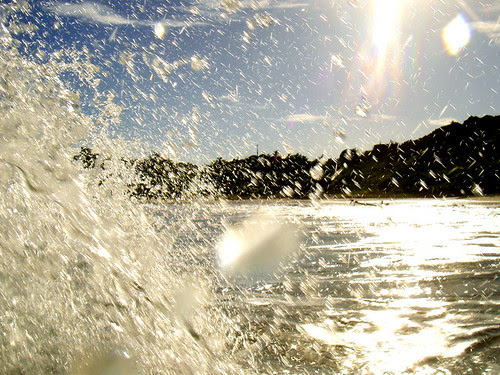 Weather in Antigua like in most places can be interesting and difficult to figure out. Thankfully with the right experience and right set of websites a person these days can have a very good idea about what weather to expect.
I get calls and emails from people each week asking what weather to expect. Most people want to know about rain and as my regular blog readers know, I have written for years on the forums and on this blog about the silly animated forecasts that incorrectly predict rain in Antigua almost 365 days a year. You can read all about these stupid forecasts here in this blog as well as a reasonable idea about how much rain you can expect to find during your vacation to the very dry rain starved island of Antigua. Antigua is one of the driest islands in the Caribbean for a reason: we get very little rain!
Anyway, another common question i get asked is about cloud cover as i have many friends who are photographers and video people. With a live view of both satellite maps and radar imaging for the area around Antigua a person can get an up to the hour picture of what both cloud cover and actual rainfall is doing. Here is an example of the satellite image for today showing Antigua and Barbuda in Red with little cloud cover. Guadeloupe is green and Dominica pink both to the south. St. Kitts and Nevis yellow to the west north west. Most satellite image maps can be put into motion to show a sped up collection 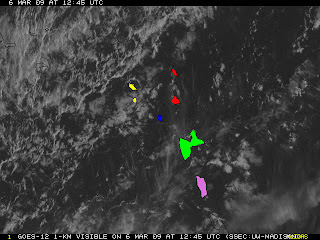 of recent images. This movie of images gives you a great idea about what direction the cloud cover is moving. The same things can be done for rainfall by using the radar images. This image below shows the same set of islands with small clusters of rainfall showing up in shades of blue. 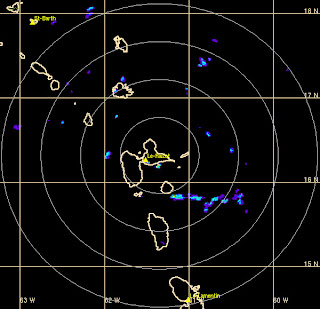 Again when put into motion you can see which direction the rainfall is moving. Usually they match up with the satellite images and give you an idea about what clouds are producing rainfall. For my snorkeling and sight seeing trips, tours and charters this is all very important because it gives us an idea of what to expect every day before we leave port in the morning. In fact, we at Adventure Antigua get phone calls from the other tours and even some hotels asking for similar information.
Another call I get is from people wanting to know about the wave forecast also known as the surf forecast. Waves and surf often have little to do with the local weather and many times you can have no winds blowing and beautifully sunny skies with huge waves pounding the shores. Sometimes you have moderate winds coming out of the east and huge waves coming from the opposite direction. Ground swell as these long period waves are called are generally generated by windy conditions and storms far from the Caribbean. This is especially the case in the winter when huge cold fronts push off the east coast of North America. Whenever you see super cold nasty conditions on the East Coast we usually can expect ground swell hitting the Caribbean a few days later. The nor-easters as they call those storms way up north push off the coast in cold fronts and churn in the Atlantic sometimes 1500 miles from the Caribbean, but the storms are strong enough to send waves all the way down to the Caribbean and South America. Apart from looking at kids playing in snow on the TV up in the States surfers and mariners have other ways of knowing that a swell is coming. Windguru.com is one of my main weather sites because it has all the info on there for a week's weather including cloud cover, winds and waves. They are usually accurate enough for the heads up on most weather events and they have been forecasting north winds and ground swell all week. The waves and winds were forecast to start coming today and peaking over the weekend into early next week. JD on Xtreme and Tony on the Eco boat called me a while ago to let me know that as expected the swells have started to pick up coming in from the North and wrapping around on to the west coast. For us, ground swells are something that we have to be very careful of because beaches along the normally calm leeward side without the protection of barrier reefs are susceptible to rolling waves. This means we can not collect guests from beaches like Hawksbill, Galley Bay, Jolly Beach, Cocobay and often times Dickenson Bay. Expecting these swells we usually shuttle guests over to St. Johns, Deep Bay and Jolly Harbour where picking them up is very easy. The funny thing about ground swells is that during the "winter" they are only bothersome on these unprotected leeward beaches. Once you get off the shore you barely notice them and as soon as you get past Dickenson Bay going north inside the North Sound you stop seeing them. The barrier islands and reefs keeps that area protected which is perfect for our tours. This ground swell looks big enough to cause beach erosion and other problems with it peaking on Monday, but the surfers have been extremely excited. Most have their boards all ready for the waves and a bunch of my friends have purchased tickets to other islands where the surf is even better during these events. Apart from windguru.com there are many other sites online forecasting waves. The most famous is surfline.com with forecasts for specific areas. It's where i got this image showing the swell arriving from the north into the Caribbean today: 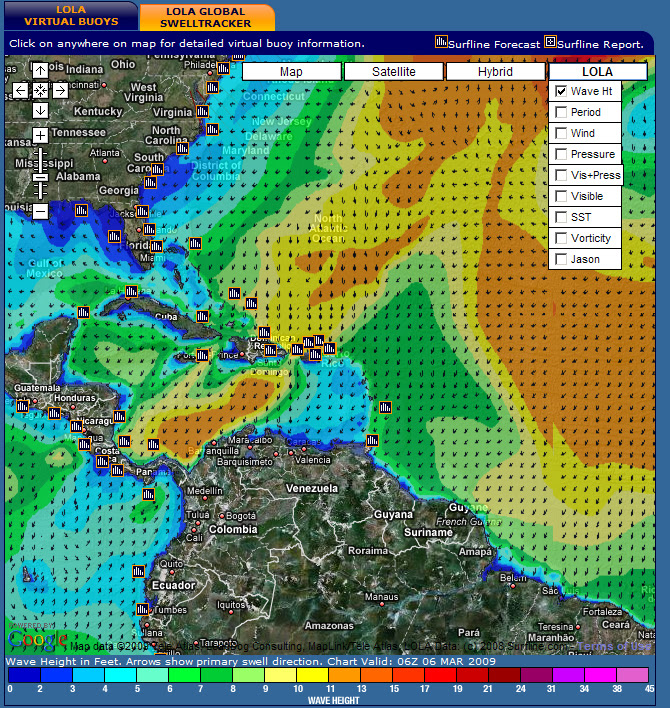 Their forecasts are the most detailed and most accurate.
Posted by 365 at 9:03 am No comments: