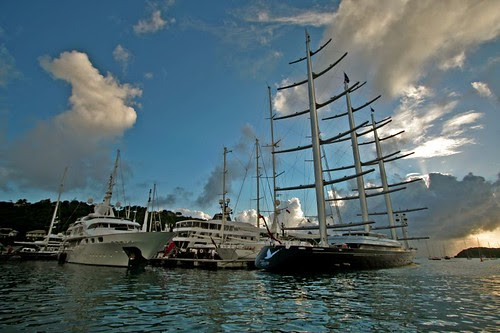 Yesterday i was hired by AcquaFilms to be their skipper for a day of filming the Super Yacht Challenge, and i have to say that it was amazing. First of all let me describe the conditions. It was a very windy day probably averaging 18 knots with big swell rolling at about 7 feet. The sky was clear and it was setting up to be some fantastic sailing. Only yachts of 100 feet and over could sail in the small event and some of the most famous big boats in the world were at the start line. The Maltese Falcon that i have written about was there as well as Mirabella V. These are 2 of the largest sailing yachts in the world that have both broken so many world records that it’s just not funny. These are SUPER YACHTS and we were the only press boat out there to witness some of the most amazing sailing in history. Usually with winds like that these multi million dollar ladies are held back to avoid "breakages", but with the owners on board and egos behaving even larger than the yachts, there was no holding back these heavenly bodies.
On board was Roddy filming with his gear all covered in waterproof protection as well as another still photographer who was working for the organizers. They both agreed that by the end of the day they had taken the most dramatic images of their careers. Since there were no other press boats out there, we were able to concentrate on getting close to Maltese Falcon and the other Super Yachts as they charged through the 30 mile course. At one time we were 30 feet away from the leeward rail of the Maltese Falcon as she roared along doing speeds over 20 knots. There is hardly any point in describing how this boat looks when you are up close to her on the dock in English Harbour, and even less point trying to describe the sheer power of a yacht that size with all her unique sails out slicing through huge waves at a frighteningly fast rate of speed. Waves were being torn apart and thrown over her deck and people on the deck were hanging on. Flying fish were jumping and gliding out of the way as if being chased by a sea monster. It was awesome....totally awesome. Remember this yacht is 289 feet of luxury that many people think is just a fancy power yacht with sails. Trust me, this yacht is a sailing machine like no other ever built.
What sucks, is i have to do it again! Wait until Roddy does a demo video.....I will put it here for sure!
Posted by 365 at 9:49 am 2 comments: