The other article this month.... 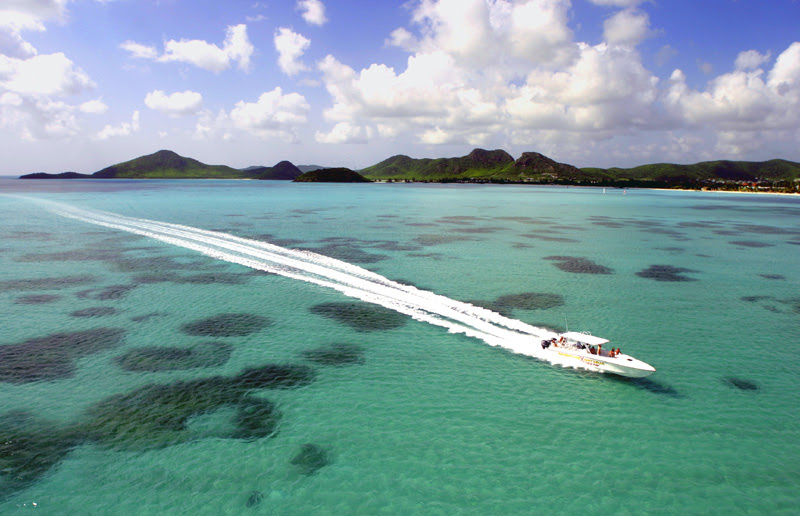 Was on the Xtreme Circumnav again today in lovely calm weather for a change, but we did manage to get some rain before lunch which "wasn't in the brochure". Anyway, after lunch the weather was perfect and Rendezvous was more stunning than usual. One lady said it was the most beautiful beach she had ever seen. I feel the same way most days too.

Its kinda late and we have another early one tomorrow so i am just going to show the article from the Travel Guardian. I guess i should mention that in the winter Xtreme leaves an hour earlier that the Eco most days in order to get to the Stingray city park in between cruise ship arrivals. They have exclusive contracts with the cruise ships to do tours for them at 9 am, 11 am, 1 pm, and 3 pm. We have to get there at 10 am in order to make the tour work and this means super early starts for the boys (and me) on Xtreme. It is nice knowing that we miss groups of 150+ who arrive at 11 am though especially when its just us in the park at 10. Here is the very English and very nice Guardian article (http://travel.guardian.co.uk/article/2006/dec/05/cricketworldcup.caribbean#more-article) :

Cricket widows (and widowers) should be sighing with relief.
In March 2007 the game that has separated countless couples for days at a time is coming to the Caribbean in the form of the Cricket World Cup. For six weeks, a tropical smorgasbord of nine countries will be offering bountiful attractions to appeal to both parties.
On November 1, Antigua and Barbuda celebrated 25 years of independence from Britain, the former colonial master of the twin-island nation. The islands have produced some of the finest test match cricketers in the history of the game: from Sir Viv Richards, whose 20-year-old record, for the fastest test match century ever, still holds, to Richie Richardson and Curtly Ambrose.
International sporting success, fused with a lovely coastline and the gently undulating landscape of the interior, has propelled the islands into the Caribbean tourist super league.
Without a single private beach on the islands and a population of under 70,000, you can always find a secluded, palm-fringed stretch of powdery sand, lapped by cobalt-blue waters, on which to unwind with a local Wadadli beer. Windward, Galleon and Half-moon beaches are among the best.
Antigua is also blessed with some of the finest coral reefs in the Caribbean. Eli Fuller’s Eco-Tour runs a seven-hour trip around the craggy north-eastern coast, with the accent on the zoology, ecology and history of the reefs and mangrove stands.
The boat passes Georgio Armani’s palatial summer home before mooring off Great Bird Island and disembarking passengers to look at pelicans, ospreys, tropic birds, laughing gulls and herons. You will also see one of the world’s leading ornithological research stations and breeding grounds for endangered hawksbill turtles, at Jumby Bay.
But the highlight is snorkelling over a coral reef just off Hell’s Gate, a small, eroded, limestone island. Hardy souls can swim out to it and then climb through caves to a whirlpool and across a natural bridge to gaze down on blue parrot fish and rays.
Read the full article……
Donning flippers, face mask and snorkel and plunging into the insanely clear turquoise water transports you to a sub-aqueous wonderland. Coral clusters the size of a small village rise on either side of you. Schools of fish coded in hallucinogenic colours pass nonchalantly by while jelly fish pulse in rhythm to the current.
Back on land, you can jump aboard a jeep for a tour of the island and rain forest. Specially converted open top Land Rovers take you to inaccessible spots that a hire car could not cope with. Ask for the driver called “Kill Bill”. He is an entertaining and informed guide who will stop to pick indigenous fruits and point out everything from the cacti Rastafarians use to keep their dreadlocks natty to banks of wild, roadside lemon grass.
No Sunday in Antigua is complete without a barbecue “jump-up” party at Shirley Heights in the south. These take place in the crumbling ruins of Fort Shirley, a former 18th century garrison for British troops at nearby English Harbour. As the evening extends into night, live steel bands give way to reggae, dancing and concerted drinking.
Don’t be part of the foolish majority who fail to make time for Barbuda, the nation’s second, and much smaller, inhabited island 48km to the north. A day trip is easy – the island is just 90 minutes away by ferry from Heritage Quay, in St John’s, or 15 minutes by plane.
Once on Barbuda, walk some of the 13-miles of pink-tinted coral sand making up Palm Beach. Having worked up a hunger, you might stop off at the horizontally laidback Martello Beach Bar for grilled lobster, fresh from the adjacent Codrington Lagoon.
Next, perhaps hire a boat and a guide and head for Man of War Island, the mangrove-rich home of the Caribbean’s largest breeding ground of frigate birds. Watch amorous males, with their eight-foot wingspans, inflate their great, bright red neck pouches as they cruise nonchalantly on thermals attempting to attract a hen. The Barbuda Warbler is also to be found here - its only habitat on earth.
Back in Antigua, art lovers can head to Woods Gallery (001 462 2332) - an artist-run co-op on the island with keen prices. It has bi-monthly exhibitions and openings where you can mingle over wine with local artists and collectors.
If you want professional pampering, the island has limited spa options: try Carlisle Bay and Antigua Yacht Club Marina Resort.
Posted by 365 at 8:35 pm No comments: