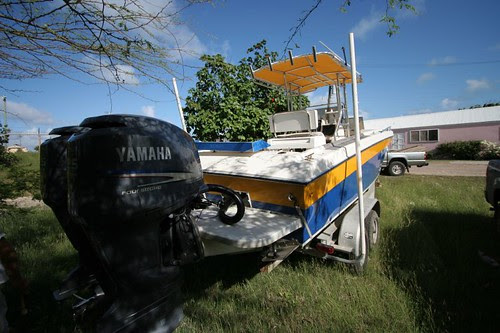 We the weekend went well with Saturday being filled with more Super Yacht excitement, parties, the traditional Half Moon Bay hangout as well as Shirley Heights. Monday it was back to reality though with setting up Eco Tour and trying to do a little work on the new little boat.
Chopper and I had tried to launch the boat to do a test run earlier last week and found both batteries to be flat. I had charged them properly at home and now we had to hook them back up and see if they were working. Getting to them wasn’t easy but putting the heavy marine batteries back in was “cake”. I had picked up Tony after dropping off the food for the Eco Tour, and we quickly managed to drop the batteries into their tight compartments. I wanted to swing the motors over before tailoring the boat all the way to the marina. The port engine turned over immediately, but the starboard one just clicked. We have a special marine battery isolator which showed that both batteries were fine, so it had to be something wrong with the connections or the engine itself. I checked all the engine fuses and tightened up the battery connections. Still no luck. The engines had worked well when I was up in Florida so I was sure that it was just a simple problem.
Finally, I broke down and called mechanic Tom who said that I had to clean the leads and connections to the battery and try it again. Something so simple, and yet that was the answer right there. The engine burst to life as soon as we turned the key.
Rudy, who lives down the beach from my home where we are storing the boat isn’t working at the moment and was helping Tony and me. When we were all set I asked him if he’d like to come and test drive it with us. He enthusiastically said yes. He had been working at The Lord Nelson Beach Hotel for nearly 20 years until it was handed over to new owners last week. I think I will dedicate a blog entry to that story another day.
We towed the boat up to Shell Beach Marina and launching pad and quickly backed her into the water. I wanted to run the engines for a few minutes before letting Tony reverse off the trailer. Another problem we had was that we had no anchor, no lines (ropes) and no fenders. If the engines cut out because of bad fuel that had been stored for months inside the tanks then they would drift up onto the coast or even reef. We ran them for a while, and they purred quietly without a problem at all. When Tony backed off he looked very happy and so was I. As soon as I had parked the truck and trailer, Tony picked me off the dock and we were off. Rudy had never been on such a fast boat and Tony was sure it was faster than Xtreme. He was excited and I could tell that he was convinced that we had to keep this new boat. I agreed too. She was stronger than I though and ran pretty well. It would be a perfect “run about” for us on days off or on holidays, and both Tony and I were sure that we could use her for small private charters. We raced up through the Long and Maiden Island channel passing the huge mega yacht Midlandia with its wealthy guests playing on the jet skies and kitesurfing equipment. We pulled into Bird Island channel a few moments later where JD and Trevor had just returned from a hike. After making sure our VHF radio worked we said goodbye to them and set off for Jolly Harbour where we could buy the things we needed for the boat. It was fairly choppy as we passed Prickly Pear Island and the bumps were exactly what we were looking for. The boat ran well through them and there didn’t seem to be any flexing in the hull.
I saw Rudy studying the coastline intently and I realized that he probably had never been down the coast of Antigua by boat. I asked him and sure enough he had no idea where we were passing. He came here to work from St. Lucia 20 years ago and had not been out boating further than the islands of the North Sound where the Eco Tour takes place. I explained to him all the places we were passing and this little test driving of the new boat became its first tour too
After a few hours and a nice lunch in Jolly Harbour we were off again back up the coast to pull the boat out of the water. I think that after a good cleaning and a small amount of fiberglass work she will be ready for action. I am still waiting on some quotes for these repairs now. The pic above is of the boat sitting next to Harriette’s house down the beach from where I live.
Posted by 365 at 8:21 am No comments: