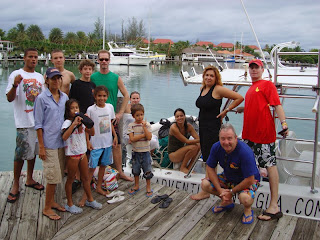 International Coastal Cleanup Day was last Saturday but things didn't come off as planned here. The year before, local environmental guru, Martin Dudley contacted me to see if i could help get some people together. We spoke with the local media, did interviews, started a facebook event/group, blogged, texted people and sent emails. In the end we did help get the message out and a good number of people around the island were down at the beaches cleaning up. We did two different days out on the Eco Tour boat cleaning beaches. This blog , this one and this one all speak about our results. It was good fun and everyone enjoyed the weekend.

Once again this year there was very little done by the people officially representing the cleanup here in Antigua. I think they forgot about it again. Martin and I spoke about it and started to get the promotional efforts going again up until windguru.com started forecasting torrential rain for the weekend. It turns out that after seeing the forecast the National Solid Waste Management Authority, who were supposed to be heading this years cleanup decided to postpone the cleanup until the following weekend. I think it was a good move as the rains dumped inches of rain on Saturday. It's very rare that it will rain all day in Antigua and on that day it pretty much did. I had a problem though because Xtreme and Arawak Odyssey were taking part in the Francis Nunes Memorial Tournament this coming Saturday exactly when the cleanup was moved to. At the very last minuted when all forecasts looked like we would be dry on Sunday i quickly sent off text messages to some of my friends to see if they would like to go for a quick beach cleanup. Our group made our way up to Rendezvous Bay where we met up with some other friends Altogether there were twenty of us on the beach with bags cleaning up bits of flotsam and jetsam. Most of the debris was plastic that had floated up but there were a few cans and quite a few glass bottles left near an old fire. We filled as many bags as we had people which was surprising because the beach looked so clean to begin with. 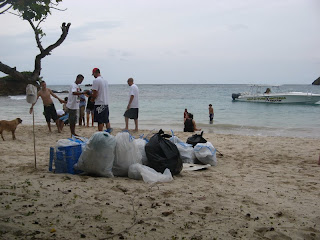 We also collected a big green net that had floated up kinda like this one we saw while out fishing one day.

After the cleanup we went down to Cades Bay so that some of the gang could do a little snorkeling. I had to call them in after a huge squall started getting too close with flashes of lightning. We got back to port before the rains started to fall. All of the members of our little cleanup group were from Antigua except one who was from the UK. He had taken time from his holiday to join us during the "weather window" to help clean up and give back a little to the environment which he says has given him so much on his holidays here. That was very cool. Anyway, this coming weekend in the official cleanup but I will be fishing. If you are on Antigua you could go down to your fave beach and do your little part. I am sure many of you cleanup every time you go to the beach. It's how we should all do it.
Posted by 365 at 7:59 am 1 comment: