a little fun for AA crew 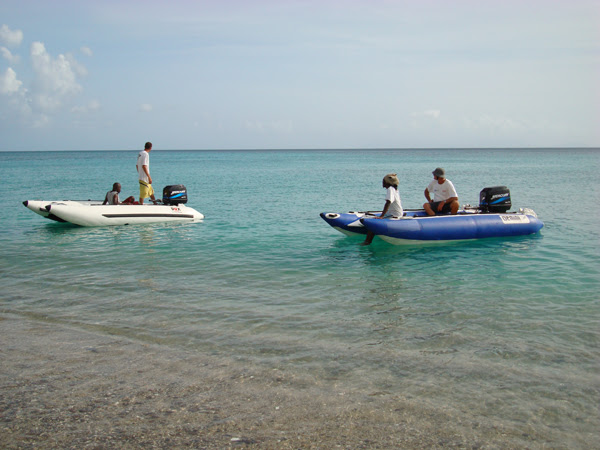 Some time ago, JD decided he loved my little dinghy so much that he wanted to buy it. I gave him a good deal on it and I went without one for some time. Anyway, another guy here on the island got one of these "Thundercats" and i knew it was time for me to get another one for myself. We would use it to pull the ring thing on kids parties. Finally we were able to get out for some racing fun yesterday. Captain of Adventure Antigua's Xtreme: JD and captain of Adventure Antigua's Eco boat: Tony were going to be riding in the DUX brand thundercat while Jason, Adventure Antigua's newest deck hand would be my co-pilot. One minute into our race JD and Tony hit a gust of wind while going over our wake and had major problems. I looked behind just to see one of them in mid air as if they had just pressed the ejector seat button on a jet fighter. Of course this happened just as three other boats were passing. One of them was a Wadadli Cats boat. I can just imagine Captain Sheldon saying "yes ladies and gentlemen on our right is a flipped boat captained by JD and Tony who are two skippers from Adventure Antigua our competition." Anyway, one of the other boats helped us right JD and Tony who were very embarrassed. I took them to shore where Chris was waiting already with tools to do some work on the flooded engine. I did some quick work on the plugs, carbs and fuel system and we were at it again. Chris took some video too which i may show later depending on the language contained within. It was boys having fun on a day off during a very slow month. There is a poker run here at the end of the month before Carnival where be a Thundercat race. That will be some silly fun for sure. It can't be all work in this company, but we have to be a bit more careful. I can't lose the two best skippers in Antigua. I guess i should say best tour boat skippers because the best thundercat skipper wasn't JD. LOL
Posted by 365 at 11:51 am 1 comment: