This year Team Adventute Antigua Xtreme entered the Antigua Sport Fishing Tournament once again. We had finished 2nd and 4th in the Marlin Divisions on previous years and had caught the biggest marlin in the last ten years and that was only on 50 lb test line. We were going for 1st this year. 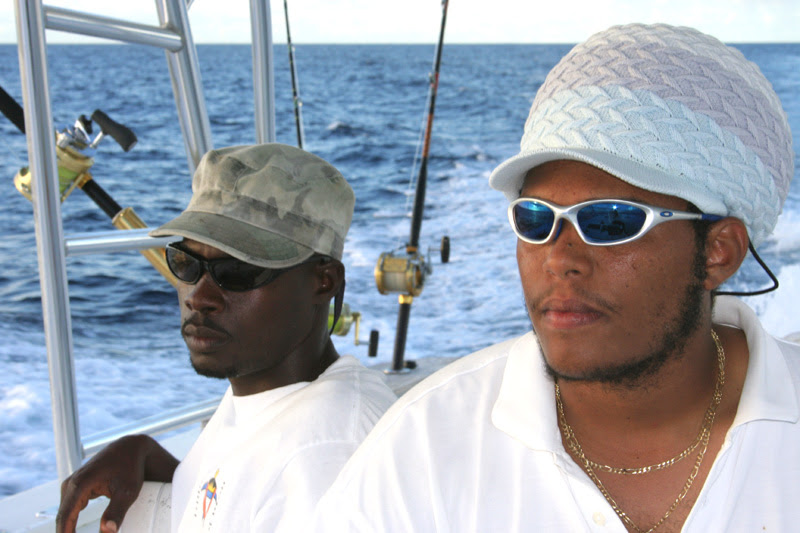 I say that because our crew was made up of three core regulars: me, Big John and Tony and we also had two more young enthusiastic fellas who had fished in tournaments with us before: Ross and Guilli. John's girlfriend, Kiesha, also came along to catch some of the smaller fish as well as take the photos needed for the marlin division. 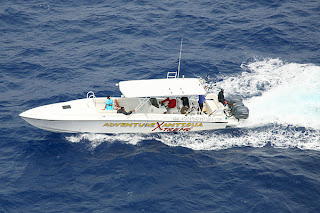 All of us knew that if given the chance we would win, and not only did we know that but we also knew that Xtreme usually raised marlin while other boats nearby saw none.
I was in the middle of moving house so decided to get a room at the Catamaran Hotel where the tournament was being held. This allowed me to try to get some rest before those wicked early mornings. The first morning we had to take part in the Bimini start at the entrance of the harbour. This is where all the boats leave at the same time going full speed out the harbour and into the big seas. 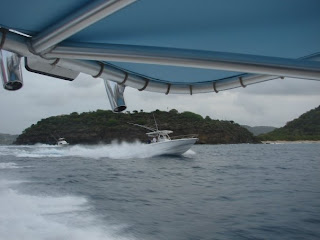 It was pretty rough that morning and as we passed my Dad and then Phillip Shoul we started getting tossed like a green salad. Xtreme was faster than the rest of the pack in the rough conditions because of its length and design. The waves down below Shirley Heights were pretty big and very short. In the rought stuff we averaged 20 knots up to a place called Frank's Hole which was where we raised our two marlin the week before. It was wet and poor Kiesha kept getting waves coming over the side and hitting her flat in the face. She is tough as nails though and didnt moan. After fishing for about 30 minutes Tony yelled that he say something in the water about 100 meters from the boat. It was early in the morning and the light was bad, so none of us could see what he saw. We got closer and Tony said he could see it again, but this time he yelled MARLIN. It was a huge marlin just swimming on the surface between the big swells. We all got ready for the hookup and saw the colourful tail as it broke the surface just off our port side. The anticipation of a hookup was something hard to describe, but it wasn't to be. On my GPS chart plotter i always use the track when fishing so that i can loop back onto the exact line i was fishing before. We fishing that area and nearby for the next hour without a strike and then moved on to a spot named "Marlin" on our GPS chart. Shortly after we got there we had a very good strike with line stripping off the reel like it was going out of style. All the other lines were cleared and the fighting belt was fitted just before the line went limp. The fish had gotten off. 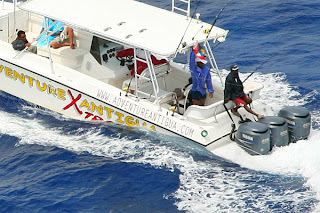 We made another pass in the area and 15 minutes later we were hooked up again. Guilli fought the fish very well as he had done with the wahoos in the last tournament he had fished with us. 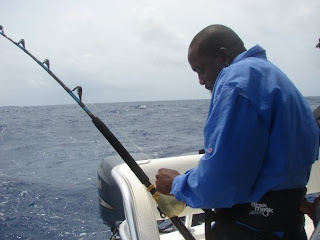 He's a very strong guy and would never rest until the fish was alongside. This marlin was about 250 lbs and came to the boat with little trouble. Kiesha took some great shots and we released the marlin to fight again another day. 300 points in the bag and we were in the lead in the marlin division. We fished the same area for another 30 minutes before we were hooked up again. This fish did the same thing as our fist strike that day. It pulled and pulled and managed to free itself. We were so upset, but that's fishing. We had lines out and were fishing again very quickly. Our team worked like a formula one pit crew. The speed and organization was excellent and the loss of two hooked fish was just bad luck. We continued to fish the same area about the size of a small village out in the ocean. There were no distinctive bottom contours or trenches, but for some reason this area had produced marlin strikes for the last three years in may and june for us. Not much time passed and a marlin came and hit the #2 lure which was only about 5 meters behind the engines. The fish just hit the lure and was gone. We knew we still had a chance and played the lure. Then our #1 lure was hit just like the last one and the fish was gone. We played the hell out of the lure dropping it back and reeling it in as if the lure was an injured and scared fish. Like had happened on almost 70% of our hook ups, the playing worked and the marlin attacked the lure hooking up this time. The pit crew cleared the lines faster than Lewis Hamilton's crew changed his tires. 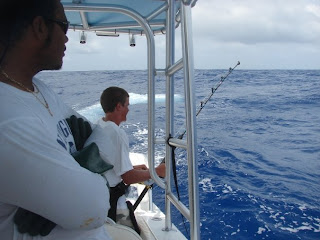 Ross was in the harness and fighting before the fish had finished his big run. Ross knew this fish had to count and did a very good job of fighting it. He wasn't as strong as Guilli but didn't slow at all. 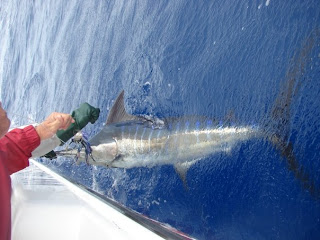 We got the fish to the boat fairly quickly and released it once we had pulled it throught the water a bit. When they come to the boat the fish can be very tired and their colours can be faded. Like most fish water pushed through their gills will liven them up. 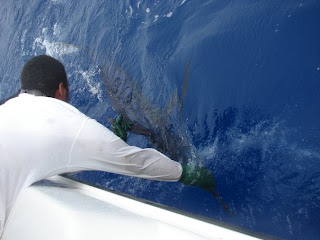 After a minute or two of being held by john alongside as i steered ahead the fish had all of its amazing colour back and was trying to break free. IT was time to let it go and in a flash of blue it was gone. We were way ahead of the rest of the fleet as it had been a slow day for blue marlin, but this wasn't enough. We had another day ahead of us and another few hours of fishing. Anything could happen. After another 45 minutes i left the spot called Marlin and headed to the spot called "Grander" on my chart. I mark areas where something unusual happens. "Grander" was the spot where a fish estimated to be a monster and local record smasher came up half way out the water with our #2 lure in its mouth. It just hovered there shaking its head until the lure was spat free. This was last year and as the #2 lure is so close to the back of the boat we all had a very close look at that fish that may have been over 1000 lbs a.k.a. "a grander". Very close to that spot was a place where most of the marlin hookups over the past 5 years have taken place. The Little Bank is a small hill coming up from extreme depths to a flat area some 350 feet below the surface. These "hills" are called Sea Mounts and fish congrigate around them. Tuna in particular feed around this bank and at this time of the year little tuna are there in big numbers and the marlin are there to feed on them. We had no luck as we passed through the "Grander" spot though and kept fishing the area in the hope that something would be raised. A little closer to the bank i had two other marks where we had caught and released marlin. GPS number 47 and 49 and they were on the line from Grander to the little bank. With only 30 minutes left in the first day's fishing i left Grander and headed on a broad reach to the bank. As our little boat passed over 49 on the GPS screen #2 got a tiny hit as if a super small fish bit the lure. We all knew different though. In deep water we treat all strikes on big marlin lures no matter how small they may be as Marlin Strikes. One of the crew played #2 and the others stood by the other rods just in case. #1 got a small hit and Guilli let the lure go back in free spool. He stopped it and reeled in quickly.....nothing...he dropped the lure back in free spool again then cranked up the drag just as the guys screamed in awe. The reel screamed louder as line and a big blue marlin started heading East back to Africa faster than you can imagine. Later Big John told me that the Marlin's bill and most of the top of its body came out of the water and it finnaly attacked the lure in a ravenous and violent manner. "ASF radio, ASF radio Xtreme is hooked up and fighting a big blue", i yelled down the mic of my VHF radio. We had to let them know we were hooked up before the official "lines out" which was at 4:30 pm. Again the four other rods and lures were cleared and put away, the two teasers were taken in and Guilli was fitted properly for the fight. I turned the boat to the fish and we managed to get it close to the boat fairly quickly again, but we all knew this one was a big fish. 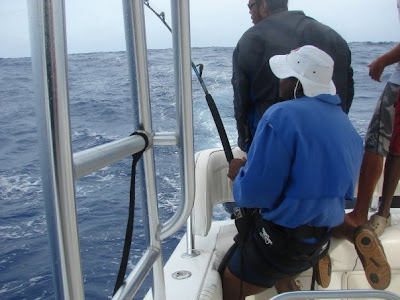 Guilli being the strong guy he is spared no time taking in the 80 lb test line. There was 26 lbs of drag pulling against him (we always use 1/3 of the breaking strain as the drag setting) and it wasn't easy work, but he was as excited as the rest of us. This was going to be the slam dunk and we hadn't even started day two. The fish never jumped, but when the double line came out of the water thirty feet behind the boat we all knew we would see it soon. With gloves on and the flying gaff ready John positioned himself to grab the leader. In slow motion i saw the leader pop out of the water as the waters below became alight with silver and dark blue. All of the crew murmered at the size of the fish. We had faught and lost bigger but had only ever brought one fish to the boat bigger than this one. What happened next will never be forgotten and could have ended in a crew fatality. I will tell you about it in the next blog. (the spell checker isn't working today on blogger so sorry in advance). (the chopper photos were lifted from the ASF website)